32BJ: Too Soon to Criticize Staffers Who Did Not Aid Asian Assault Victim 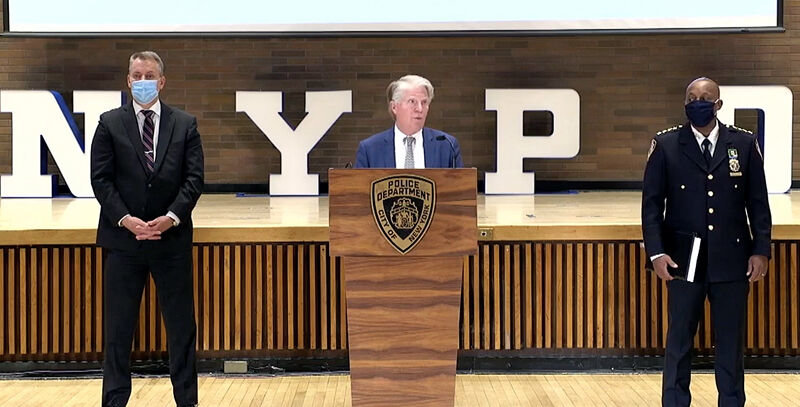 HATE CRIME ABETTED BY WORKERS' INACTION: The brutal attack against a 65-year-old Asian woman in Midtown outraged the public--and so did the lack of action taken by two onlooking staff working in the residential building just steps from where the assault occurred. At a March 31 press conference detailing the arrest of the alleged assailiant, Manhattan District Attorney Cyrus Vance Jr. (center) condemned the recent attacks against Asian-Americans.

After staff at a residential building were excoriated on social media for not intervening in the attack of a 65-year-old Asian woman in Midtown, Service Employees International Union Local 32BJ urged the public “to avoid a rush to judgment.”

The disturbing video of the March 29 attack shows a man kicking Vilma Kari, knocking her down to the ground and repeatedly kicking her in the head in front of 360 West 43rd St. During the attack he yelled to Ms. Kari, who is Filipino, “You don’t belong here.”

Two male lobby staffers and a deliveryman can be seen looking on as the assault occurred, with one building worker walking to the door to close it as the video cuts off.

Brandon Elliot, 38, who was on lifetime parole following his 2019 release for the 2002 murder of his mother, was arrested at a homeless shelter in Midtown March 31 and charged with two counts of second-degree assault as a hate crime and one count of first-degree attempted assault as a hate crime. He faces up to 25 years in prison in addition to penalties for the parole violation.

But the fact that the workers did not rush to aid the woman sparked almost as much outrage as the attack itself.

Although many—including Mayor de Blasio—initially referred to the two lobby staffers as security guards, the workers were concierges, according to the union. The workers have been suspended “pending determination of whether all emergency protocols were sufficiently followed,” according to the building’s management company, the Brodsky Organization.

“We take this situation very seriously, and are committed to strengthening internal training and working with our community to ensure the safety of our residents and neighbors,” the company said in a statement.

During a March 30 press briefing, the Mayor said that it was “absolutely unacceptable” that the staffers did not intervene. Mayoral candidate Andrew Yang asserted that if they had intervened, “they could have done a lot of good.”

A longer video subsequently provided by the Brodsky Organization showed that although the lobby staff did not physically intervene, they went outside to aid the woman after Mr. Elliot left the scene. They flagged down an NYPD patrol car that was nearby, according to both the union and the NYPD. The department stated, however, that no calls to 911 were made.

The staffers claimed they did not immediately help because they saw the suspect holding a knife.

32BJ President Kyle Bragg said that the “union is working to get further details for a more complete account, and [we] urge the public to avoid a rush to judgment while the facts are determined.”

He added, “We are disgusted and outraged by the attack,” which was “yet another example of the unbridled hate and terror against our [Asian-American and Pacific Islander] neighbors.”

State Sen. Brad Hoylman, who sponsored a bill that would require the state the collect and publish data regarding hate crimes, agreed with Mr. Bragg, adding that the workers "did nothing wrong."

During a March 31 press briefing on Mr. Elliot’s arrest, Police Commissioner Dermot Shea said that although “I fully understand the public’s anger, I can’t put myself in those employees’ shoes. I’d like to think that anyone would step in and protect the woman from that brutal attack. I don’t know if they were scared.”

He continued, “My focus is on the victim and let’s not lose sight on who’s responsible for this, and that’s the individual who committed the crime.”

The attack was just one among a recent uptick in hate crimes targeting Asian-Americans all across the country. So far this year, 33 crimes against Asian-Americans have been reported to the NYPD, compared to 28 during the entirety of 2020.