At Own Memorial Event, Firefighters Honor Those Lost 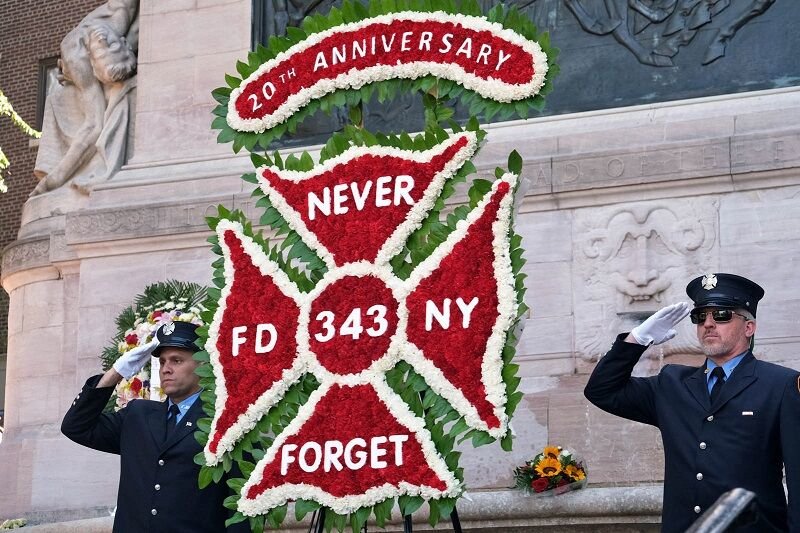 ALWAYS ON THEIR MINDS: The annual unofficial firefighter memorial service for the 343 members of the Fire Department who died on 9/11 was held last Saturday at the Fireman's Monument in Riverside Park. The new president of the Uniformed Fire Officers Association said that the lives of those lost in the line of duty are in the thoughts of firefighters every day, with new ones required to research what happened to those who came from their firehouses.

The most-common observation heard Sept. 11 at the reading of the names of the 343 members of the Fire Department who during the 9/11 World Trade Center rescue efforts was just how much the cloudless Saturday sky resembled that fateful morning 20 years ago.

The annual ceremony at the Firemen's Monument on Riverside Drive drew a larger crowd than last year when the Firefighters and officers who held the service required attendees to wear a mask.

No Masks This Time

This time, the masks were gone.

As he has done in the past during his invocation, FDNY Chaplain Stephen Harding, referred not just to the 343 members of the service who died the day of the terrorist attacks but the 257 who have since perished from  exposure for the toxins released at the World Trade Center by the destruction of the Twin Towers, which lingered for months at the site.

Asked afterwards about his writing process for the occasion, he replied, “I try to put myself back in what I was doing that day, and I think about the members we lost. I think about their families, and I realize the void that exists for those families.”

He added, “You have to be aware that 257 and 343 is 600, and it's growing, and my understanding is that there are guys that are still sick, so this is a continuing tragedy.”

According to the U.S. Centers for Disease Control and Prevention, 2,901 first-responders and close to 900 survivors have died from their exposure to the WTC toxins—several hundred more than lost their lives on 9/11.

The anniversary falling on a Saturday produced a a more-informal feel at the Monument, while the proceedings in lower Manhattan drew top Fire Department officials and elected officials. (Fire Commissioner Daniel Nigro visited the Firemen’s Monument at 7 a.m. to lay a wreath.)

Retired Orange County California Fire Capt. David Bautista made the cross-country trek, just as he did two days after 9/11 when he and several co-workers flew east to join the rescue-and-recovery efforts downtown.

“We had to come and do something which we did as soon as things opened up on Sept. 13 and we came to work at Ground Zero,” he recalled. “We were working there for a while and the guys at the site told us ‘Hey, we appreciate you helping us with this, but let us dig our brothers out; we need you to go to the funeral services and memorials for us to show support for the Fire Department for the families of the fallen.”

Over a ten-day period in 2001 the Orange County firefighters attended two to three funeral services a day. “It absolutely changed my life,” said Mr. Bautista, who retired in 2013.

UFA President Andy Ansbro said that in addition to the close to 1,000 attendees at the Firemen Monument commemoration, most firefighters attended events held by their companies, noting that "75 firehouses lost at least one person on 9/11.”

He was just a few weeks out of the Fire Academy at the time, and “9/11 was my first fire,” he said. “After I survived the collapse, making it out of the Marriott lobby in between collapses, we mustered up at the marina. And after the second collapse, we started fighting fires and I started pulling hose off of Marine 1 [a department fireboat], so we could operate, because all of the water mains were broken at that point.”

Uniformed Fire Officers Association President James McCarthy remarked, “The unusual thing about the Fire Department is this is not something that just happens one day a year. We think about our line-of-duty deaths every day. There is a brass plaque in every firehouse with the name of [each] person killed in the line of duty—what box they were at—and the date they died.”

The Lieutenant continued, “If you are a newly assigned probie Firefighter to a firehouse, you are asked to research every name on the wall and get to know them and make a report to the rest of the members of the firehouse."