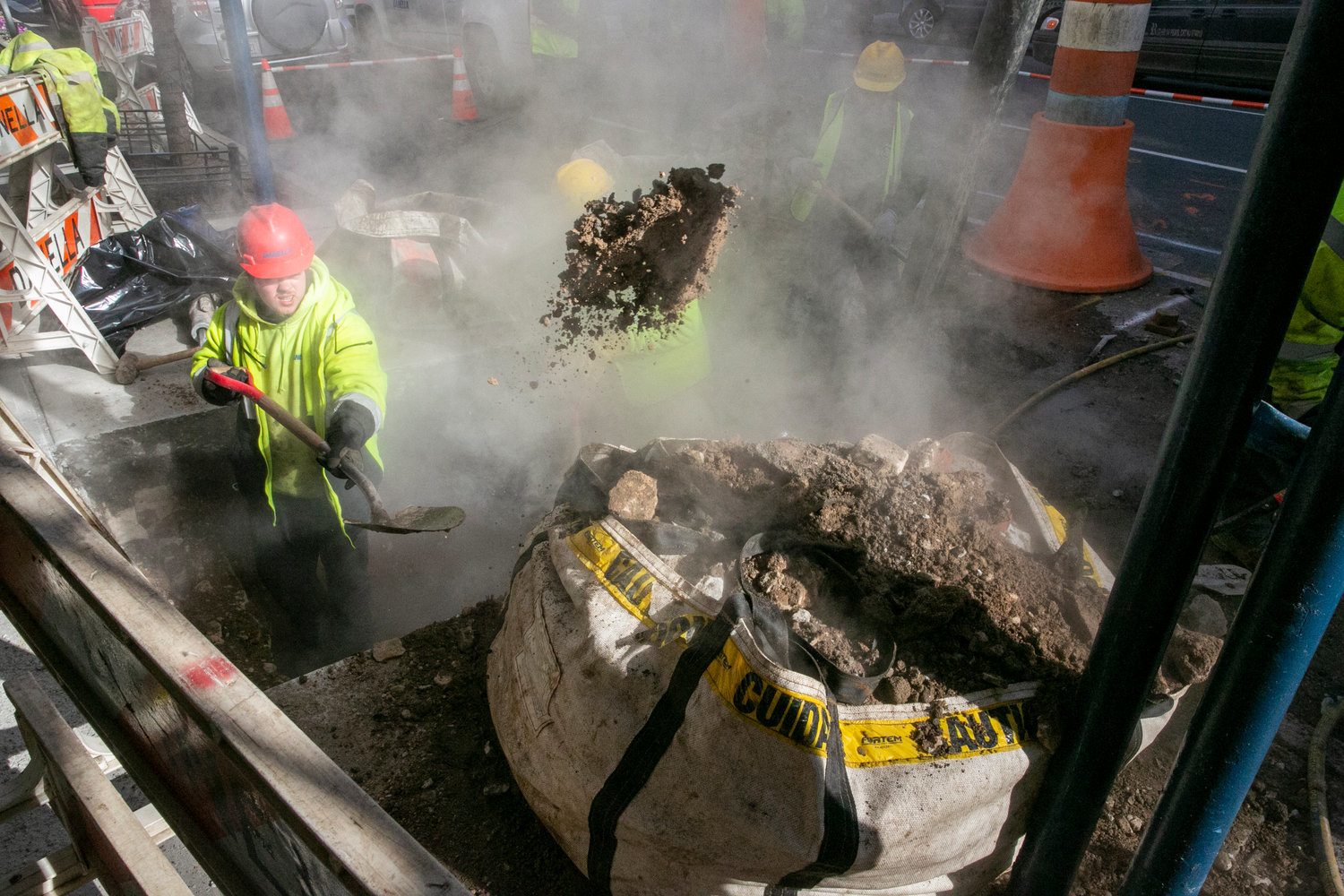 A worker shoveled dirt from under the street pavement while repairing a steam pipe in Manhattan.
Ted Shaffrey/AP Photo
Posted Wednesday, January 18, 2023 12:47 pm
BY RON ISAAC

Remember that historic photo, one of the most popular postcard keepsakes for tourists, of the laborers snacking on a narrow girder suspended high in the air, seemingly above the clouds, during the construction of the Empire State Building?

Well, it was during the Depression and that's what those guys signed up for.

New York City construction workers know that their line of work has the highest rate of job-related sudden death. The perils are built-in and to an extent unavoidable. They are implicit enough without their needing to be amplified by the explicit callousness and forced errors of their employers.

On average, one is killed every week. Productive men and women. Not managers.

Prior to enactment, Carlos' Law languished around the legislature in Albany for years. Finally it has gone into effect. If seriously enforced, it is a monumental achievement, but it's gotten little publicity.

On the talk-radio stations, we're blitzed by an obnoxious jingle, (suitable for enhanced interrogation of terrorists), about car donations with no specific lowdown about the alleged charity; a cancer doctor,  monopolizing the airwaves, with entrepreneurial wizardry, perennially plugging across the dial, dusk to dawn, his alternative to "super-pooper hospitals; or about "servings" of dozens of fruits and veggies compressed into a compressed capsule for "preferred" customers.

But not much traction for a story about a major triumph for workers.

Carlos' Law increases the price that corporations must pay for criminal liability. The New York State Penal Law now calls for $300,000 for a misdemeanor and a half-million for felonies.

Will penalties correspond to injuries? Will investigations be impartial and tamper-proof? Will victims, their families or estates be "made whole"?  By whom and within what time frame?

Welders, crane operators, iron workers and every other title of laborer on a construction site are literally the builders of the city. They are the oxygen of its revival.

But the city is culturally enamored of big builders and contractors. Unless the optics are beyond repair and the shock resonates in the media, it's likely the law enforcers will go easy on most corporate violators.

Construction sites are minefields. Even scaffolding and sidewalk sheds are occupational hazards.And until Carlos' Law, the U.S. Occupational Safety and Health Administration (OSHA) was little more than a hole-riddled umbrella for workers exposed to the rain of abuses.

The new law is named for Carlos Moncayo, who in 2015 was crushed to death under tons of dirt when an unprotected trench collapsed after the site's supervisor and foreman had been warned multiple times by an inspector.

The site supervisor who indirectly took Moncayo's life was convicted of criminally negligent homicide and paid his debt to society: probation and community service. The supervisor's employer was found guilty of second-degree manslaughter and other crimes: he was slapped with a $10,000 fine, presumably not tax deductible.

What are the occupational hazards of corporate boardrooms? Being deafened by eavesdropping devices, tripping over trap doors down the stone stairs to where the skeletons of whistleblowers are hidden, open mics, glitches in non-disclosure agreements, dysfunctional Keurig machines?

And what draconian injuries: wounded pride from making a petite concession to their employees?

Since OSHA was enacted, there have been over 400,000 workplace fatalities. According to the narrative accompanying the legislation, fewer than 80 of them led to prosecutions and just a dozen employers were convicted.

In 2021, around 200 workers suffered severe falls, some occurring  after "stop work" orders were ignored by "rogue developers and nefarious operators,” as Michael Hellstrom of the Mason Tenders District Council generously calls them.

It's not worth dignifying, or trying to convince anybody not already aware that labor unions are mostly abhorred by employers. Some employers, as a practical strategy, try to live in harmony with unions because they have no choice than to put up with them.

But they are always about the "bottom line" and union wages and benefits are obstacles to their coveted divine right of unlimited profit.

Almost four-fifths of private construction in New York is reportedly done with predominantly non-union laborers, at "open-shop" sites that allow contractors to save 30 percent of costs.

The Economic Policy Institute notes that "union construction workers earned an average 40 percent more than their non-union workers." And non-union work sites, which are less rigorously inspected, represented 86 percent of construction deaths in New York, according to the New York Committee for Occupational Safety and Health.

Louis Colletti, president and CEO of the New York Building Trades Employers’ Association, opposed Carlos' Law because of its "punitive effect" — the boosting of insurance liability rates and purported stroking of a recession. Compared with insurance costs per square footage in other states, New York's is "astronomical and out of line,” he’s claimed. He fears this aggravates New York's housing shortage, affordability crisis and market downturn.

Cloaking themselves in the mantle of social equity, (they have multi-purpose mantles in their wardrobe), many within the business community have expressed anxiety that the tightened mandates of Carlos' Law may disproportionately harm minority and women-owned small businesses.

Mr. Colletti proposed some "minor changes" to the legislation. He favored making the fines a ceiling, not a floor.

Call me sentimental, but I don't think we should cap the value of a human life or the financial embarrassment of minimizing it.

He further wishes the law would "clearly define the standard of culpability within the law as criminal recklessness.” Would that include thumbing their corporate nose at a "stop work" order?

And he urges a focus on the exact meaning of "serious injury.” Does that mean that the classification of two broken hips and a shattered pelvis could still be accommodated into a more employer-friendly standard?

Prosecutions of corporate lawbreaking directly linked to employee injuries should be swift, consistent and harsh. Individuals, not just their companies, should be personally liable, even to the point of incarceration.

The event that led to Carlos' Law would be a footnote in the government's archives of unfortunate incidents, if it got even that much traction, were it not for labor unions. They are the spearheads of progress.

According to a Gallup poll from a few months ago, 71 percent of Americans approve of labor unions. The National Labor Relations Board reported that during the 2021-2022 fiscal year, petitions for union representation rose by 53 percent. And the AFL-CIO Central Labor Council notes that a "survey of non-union skilled and hourly workers revealed 70 percent of those workers would join a union at their current job, and about 40 percent said they were more likely to do so today than they were just three years ago.”

No elected official merits guaranteed permanent endorsement. It must be continually and unflaggingly re-earned.

But with Carlos' Law, and her signature on additional legislation that establishes, according to the Cortland Voice, "a registration system for contractors and subcontractors engaged in public work and covered private projects,” New York's Governor Kathy Hochul  has taken bold steps to solidify support.

The blood of Carlos Moncayo courses through all workers for whom, no less than a soldier lost in a battle for freedom, he made the supreme sacrifice. He was an undocumented immigrant whose living legacy is now documented in law.