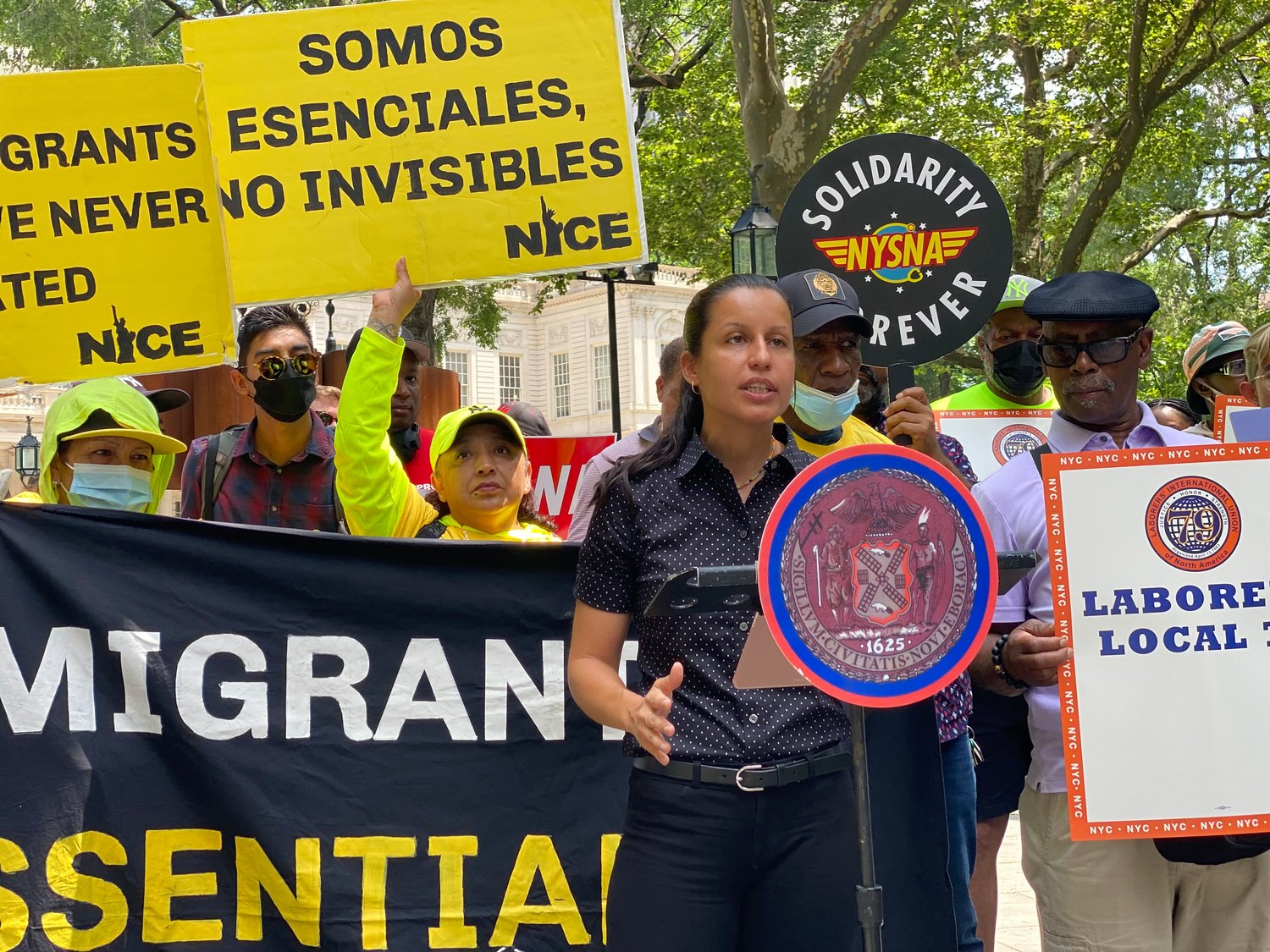 Council Member Tiffany Cabán, pictured speaking at a "New York Is A Union Town" rally outside City Hall, introduced her “10 Steps to A More Affordable NYC” plan last week, which includes the introduction of a “just cause” bill she said “would remove workers’ fear of being fired by union-busting bosses.”
Courtesy of Tiffany Cabán 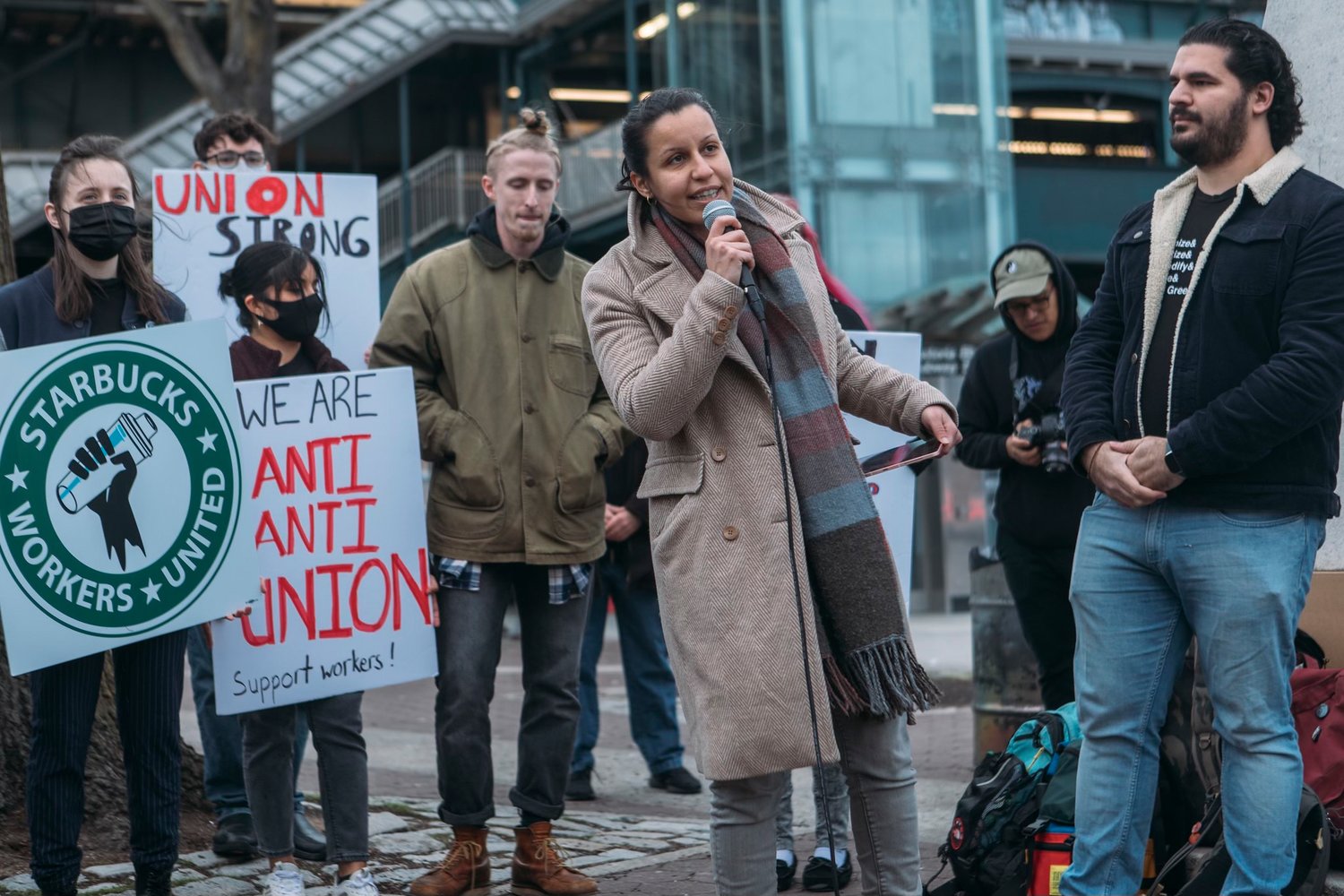 Council Member Tiffany Cabán (center) rallied with unionizing Starbucks workers in Queens. Cabán said she plans to introduce “Universal Just Cause” legislation that she said could herald “an explosion in unionization across the city,”
Courtesy of Tiffany Cabán
Previous Next
Posted Monday, September 19, 2022 8:10 pm
BY DUNCAN FREEMAN

Council Member Tiffany Cabán plans to introduce “Universal Just Cause” legislation that would protect workers, regardless of union status, from egregious at-will firings.

The measure would create “an explosion in unionization across the city,” by decreasing turnover rates and ensuring workers wouldn’t lose their jobs for organizing their workplace, according to Cabán’s announcement.

“I see this legislation primarily benefiting low-wage and immigrant workers,” Cabán  said in a statement. “The fact is, unionization efforts require workers to build relationships based on mutual trust and accountability, to say nothing of solidarity, and that is extremely difficult in sectors with very high turnover. This legislation would keep people in their jobs long enough to see the process through.”

Cabán said that her office has been working alongside the Amazon Labor Union, Make the Road and the National Employment Law Project, among other labor organizations, to develop the legislation.

About 70,000 fast food workers across the five boroughs are already protected by “just cause” and fair workweek laws signed into law by former Mayor Bill de Blasio at the beginning of 2021.

That “just cause” law ensures that fast food workers, after 30 days on the job, cannot be fired unless there is a “just cause or for a bona fide economic reason.” Companion legislation also requires employers to provide workers with regular schedules and penalize employers for changing these schedules on short notice or reducing an employees’ hours by more than 15 percent. That legislation built on fair workweek laws for retail workers enacted in 2017.

The city’s Department of Consumer and Worker Protection has already sued Starbucks under the original “just cause” laws after an employee at an Astoria location of the coffee chain, Austin Locke, was fired less than a month after workers at the store voted to unionize. In July, 12 Chipotle workers filed complaints against their employer under the “just cause” and fair workweek laws.

The Chipotle workers are backed by 32BJ of the Service Employees International Union, which spurred the passage of the original “just cause” and fair workweek bills. The union filed various complaints on behalf of Chipotle workers in 2018 and 2019 based on the fair workweek law that resulted in a $20 million dollar settlement, finalized in August, to be distributed to former and current Chipotle workers. 32BJ did not immediately respond to an inquiry about Cabán’s announcement.

Comptroller Brad Lander, one of the chief sponsors of the original “just cause” bills during his Council tenure, supports broadening those protections. “Just Cause and fair scheduling were huge wins for fast food workers and expanding them will benefit all workers across NYC,” he said in a statement. “Whether they are delivery drivers or doctors, protecting workers from being fired without just cause will ensure stability and safety, enabling them to sound the alarm bell on unsafe working conditions or confront harassment without fear of retribution.”

Council Speaker Adrienne Adams, another chief sponsor of the original legislation, declined to comment on Cabán’s yet-to-be-proposed legislation but a spokesperson told The Chief that, “as the daughter of two proud union workers, Speaker Adams is a strong supporter of unions and the rights of workers to organize for fair pay and working conditions.”

Cabán’s announcement arrives as part of her “10 Steps to a More Affordable NYC” campaign, which she launched last week after completing a deal on a housing development in her district. The 10th step, “Support Union Wages," says in part that Cabán is “working with a broad array of labor stakeholders to introduce a Universal Just Cause bill that would remove workers’ fear of being fired by union-busting bosses.”

Cabán says that by universalizing these “just cause” protections, New York City could show that "all workers deserve that same degree of confidence.

“What could do more to boost unionization than that?”