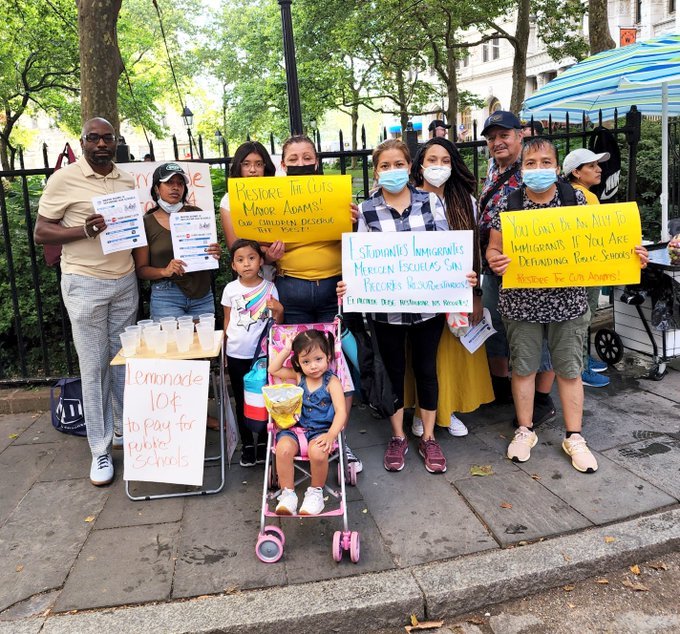 As the legal battle between the city and public-school parents and teachers over school budget cuts continues, the city comptroller’s office found in its year-end analysis of the last fiscal year that the city has enough funds to reverse the reductions.

The city has $800 million in excess tax revenues that weren’t included in the city’s budget, City Comptroller Brad Lander announced as part of his fiscal review published Aug. 1. He called on the city to place that money in its Revenue Stabilization Fund, one of the city’s rainy day funds, in the event of an economic downturn, but also to use the funds to fully reverse planned budget cuts affecting the vast majority of public schools.

Lander’s office also analyzed how the city Department of Education has spent more than $3 billion in federal coronavirus stimulus funding, and found that $505.6 million has not yet been allocated.

“Preparing for the future means both fully funding our schools to help our kids recover from the pandemic and getting our fiscal house in order for the possibility of a recession,” Lander said. “Our year-end analysis shows we can do both. There’s no fiscal need to shortchange our kids.”

The city’s spending plan, passed in June, included $215 million in cuts to individual school budgets. But the comptroller’s analysis of school budgets found that the cuts would amount to $469 million, more than double what the city reported. More than 1,100 schools are expected to slash their budgets, while 354 schools are seeing budget gains adding up to $96.4 million, totaling $372 million in cuts.

The United Federation of Teachers adamantly opposed the reductions, which have forced school principals to excess staff, meaning that teachers and other educators will be forced to find jobs at other schools.

“New York City has billions of dollars in reserves that can be used for education. It makes no sense for City Hall to cut funds to our schools,” the union’s president, Michael Mulgrew, said in a statement. “City Hall and the DOE need to come up with a long-term, transparent plan to support and help our children overcome the impact of the pandemic. The money is there. They need to act.”

So far, hundreds of teachers have been excessed. The New York Post reported July 29 that near the end of the school year, there were 133 educators seeking placement — but that number ballooned to 700 because of the school budget cuts.

The DOE and Mayor Eric Adams have cited declining enrollment as the reason for slashing school budgets. Public schools have lost 73,000 students since the start of the pandemic, according to a recent report by the city Independent Budget Office.

New York Supreme Court Justice Lyle Frank issued a temporary restraining order July 22 barring the city from going forward with the school budget cuts. Four parents and teachers had filed a lawsuit alleging that the city violated state law by passing the budget that included the cuts before the DOE’s oversight body, the Panel for Education Policy, could vote on the spending plan.

“We continue to believe that the cuts are causing irreparable harm to students and teachers,” stated the attorney handling the case, Laura Barbieri of Advocates for Justice.

The city appealed the decision, arguing that the ruling would severely disrupt schools’ ability to open smoothly in September.

In the court filing, Schools Chancellor David Banks wrote that the interruption “that is being caused by the [temporary restraining order] is creating a major risk of hindering the orderly opening of schools by delaying the filling of staff positions, putting programs in limbo, and leaving supplies and services not ordered.”

But a Manhattan appeals court justice upheld the temporary restraining order July 29. The next court hearing will be held Aug. 4.