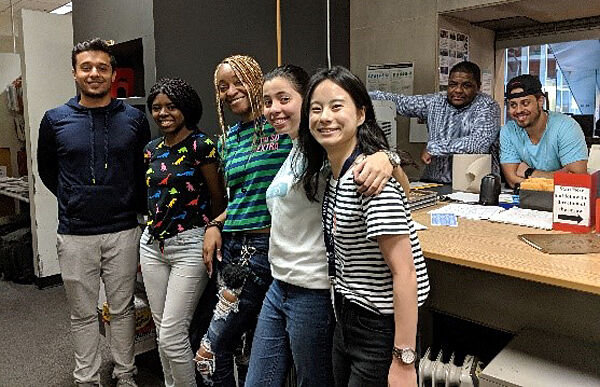 NOT A GOOD LOOK: Although the City University of New York has adopted Juneteenth as a paid holiday, hourly classified staff including thousands of College Assistants will not receive the paid day off.  Dishunta Meredith, president of District Council 37's Local 2054, called it 'insensitive' that her members, many whom are black, will not benefit. Above, College Assistants at John Jay College.

The head of the District Council 37 local that represents thousands of College Assistants at the City University of New York slammed the fact the predominantly black and brown workforce would be barred from receiving Juneteenth as a paid holiday.

Juneteenth, which is celebrated each June 19, commemorates the end of slavery in the United States and honors the history and achievements of African-Americans. Last year, Governor Cuomo signed legislation marking Juneteenth as an official public holiday, with state employees receiving a paid day off.

Last June, CUNY’s Board of Trustees adopted a resolution declaring that it “desires that all University employees benefit from the observance of June 19, 2020 as a holiday.”

But while most staff at CUNY were eligible for holiday pay, College Assistants were excluded.

“In accordance with the collective bargaining agreement, College Assistants and other hourly classified staff are not eligible for holiday pay—on any holiday—unless they work on the holiday,” CUNY spokesman Frank Sobrino said.

But Dishunta Meredith, president of Local 2054, argued that was an excuse because the holiday wasn’t collectively bargained for any of the staffers who were eligible.

“A lot of my College Assistants are African-American, including myself,” she said.

According to CUNY data released last year, nearly 25 percent of classified hourly staff were black, and three-quarters of classified titles were held by people of color.

When Ms. Meredith found out two weeks ago that her members weren’t going to get the holiday, “I thought it was insensitive. The ones who are really affected won’t be the ones benefiting from this policy,” she said.

She added that many College Assistants earned minimum wage, and most of them were women.

“They are the backbone of the university. We do Bursar, admissions, we’re the tutors,” Ms. Meredith said. “We keep CUNY running. But we’re the bottom of the totem pole.”

When asked whether the local’s parent union would discuss the issue with CUNY, a spokeswoman for DC 37 stated that “these are contract-negotiation issues, and we don't negotiate in the press.”

Ms. Meredith was also frustrated by CUNY’s decision to cut hours for dozens of College Assistants. Although the union’s contract caps College Assistants at 20 hours a week, for years CUNY scheduled CAs for 35 hours, she said.

In 2015, some colleges, including the Borough of Manhattan Community College and John Jay College of Criminal Justice, updated their payroll systems and planned to start scheduling College Assistants for 20-hour week schedules to align with the contract, she explained. But DC 37 and CUNY reached an agreement that grandfathered in more than 300 CAs to allow them to continue to work 35 hours a week.

Although the agreement was honored for several years, it was never signed, Ms. Meredith claimed. Last year, the CAs were informed by CUNY that they would see a 15-hour reduction.

Mr. Sobrino said that CUNY “discussed with DC 37 phasing out hours above the 20-hour-a-week maximum…This small group was provided ample notice that effective June 30, 2021, their assigned work hours would be in compliance with the work hours limitation in the [contract]."

While most of the employees whose hours were grandfathered have retired,  between 50 and 60 of them are still working, according to both CUNY and Ms. Meredith.

The local president said she was “very angry” about the situation, especially because the majority of the affected members had worked at CUNY for 20 years or more. And thousands of CAs have already faced increased instability because CUNY has shifted to hiring them on month-to-month contracts since last summer due to the pandemic.

She believed DC 37 hadn’t done enough to protect her members, and argued that CUNY had the money to cover retaining those longer schedules.