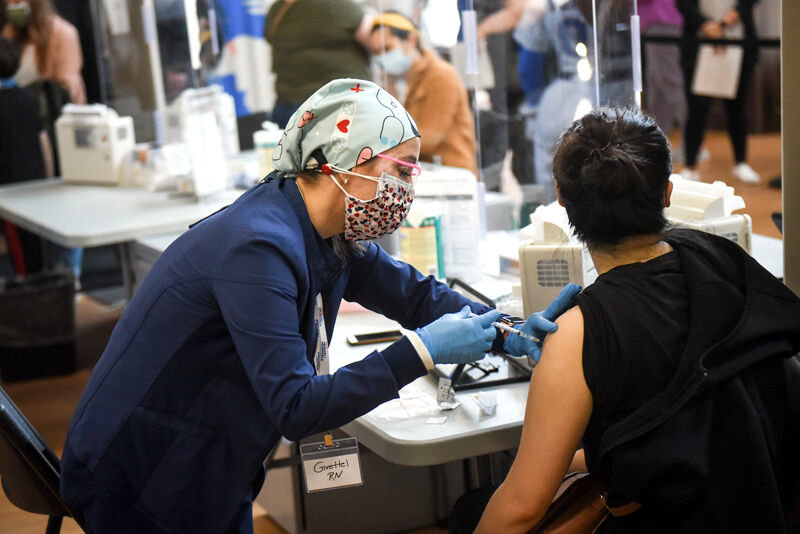 A BRIEF REPRIEVE?: A Federal appeals court Sept. 24 issued a stay of the city Department of Education's vaccine mandate, delaying implementation until after a Sept. 29 hearing. If the mandate is ultimately allowed, up to 30,000 school staff would have to be inoculated or face suspension.

The 2nd U.S. Circuit Court of Appeals granted the temporary restraining order late Sept. 24, which means that the Department of Education will have to put on hold implementation of a vaccination requirement for 148,000 school employees that was supposed to take effect Sept. 27.

The ruling meant that school staff who are not vaccinated or haven’t received a medical or religious exemption will not be taken off payroll Sept. 28 as was previously planned.

The case will be reviewed by a three-judge panel Sept. 29.

DOE spokeswoman Danielle Filson said the city was “confident our vaccine mandate will continue to be upheld once all the facts have been presented, because that is the level of protection our students and staff deserve.”

In a memo released Sept. 25, Schools Chancellor Meisha Ross Porter told Principals to prepare for “the possibility that the vaccine mandate will go into effect later in the week."

In a statement, United Federation of Teachers President Michael Mulgrew said that the decision gave Mayor de Blasio and DOE “more time to put together a real plan for dealing with the expected staff vacancies the mandate would create.”

The Municipal Labor Committee, which includes unions representing school employees, filed a lawsuit Sept. 10 arguing that the mandate was “coercive” and “poorly-conceived” because it did not provide medical exemptions, and called for the mandate to be delayed. Manhattan Supreme Court Justice Laurence L. Love granted the temporary restraining order four days later, but then lifted it Sept. 22.

In his decision, Justice Love determined that “State and Federal courts have consistently held that a mandatory vaccine requirement does not violate substantive due process rights and properly falls within the State’s police power.”

He added that unions representing school employees would have difficulty proving the interests of their members outweighed public-health interests, and that they were unlikely to prove the mandate would cause “irreparable harm.”

After that ruling was announced, District Council 37, which represents non-pedagogical school employees, urged the DOE to give staffers the option to be tested for coronavirus on a weekly basis, much like the mandate that had been set for the rest of the municipal workforce.

Because of a separate arbitration agreement with the UFT, the DOE is allowing employees to seek medical or religious accommodations to work in non-classroom settings—although very few staffers will likely qualify, the Mayor noted. He said Sept. 24 that at that point, 530 exemptions had been granted.

Although 87 percent of Teachers were already vaccinated, about 10,000 still have not gotten the shot. The UFT, however, has estimated that the figure was closer to 6,000, with half of those members having applied for medical or religious exemptions.

After the temporary restraining order was lifted, the Council of School Supervisors and Administrators and the UFT raised concerns about a potential Teacher shortage if a substantial number of educators refuse to get inoculated. With fewer educators, class sizes could also balloon, making social-distancing impossible, the unions feared.

Mr. Mulgrew and CSA President Mark Cannizzaro urged the city to delay implementation of the mandate until a contingency plan for the staffing shortage could be put in place.

“Despite our repeated warnings, the city is ill-prepared for the impact of the vaccination mandate on staffing in schools with just four days to go before it takes effect,” Mr. Cannizzaro said. “We’re hopeful that DOE employees offer proof of vaccination in high numbers in the coming days, but optimism is not a viable strategy. It is dangerous and irresponsible for the city to move forward with its plan to allow schools to operate so severely understaffed.”

About 5,200 Teachers have been hired this year, while the Mayor said that there were “thousands and thousands” of vaccinated substitute Teachers ready to fill in the gaps.

“It's also true that central staff has thousands of educators, certified educators, who could step into different roles if needed. So, they’ll be ready, but…we think the overwhelming majority of our educators and staff are going to be there…having gotten that first dose,” he said.

The head of the Principals’ union also stated that School Safety Supervisors had informed his members that come Sept. 28, most schools except large high schools would have only one School Safety Agent.

Teamsters Local 237 President Gregory Floyd said that the Police Department informed him that about 50 percent of School Safety Agents were unvaccinated.

Mr. Floyd noted that even without members being taken off of payroll, there was already a shortage of School Safety Agents, numbered about 4,300, compared to a past force that generally was close to 5,500. Although the city has announced a 250-person class of recruits for the position, they must undergo a 17-week training process.

“This is something that Mayor de Blasio didn’t prepare for,” he said.

Mr. Floyd, who was fully vaccinated, added that there should have been more effort to reach out to School Safety Agents to get the shot.

“There is a lot of misinformation,” he said. “We did a poor job of educating the New York City workforce.”