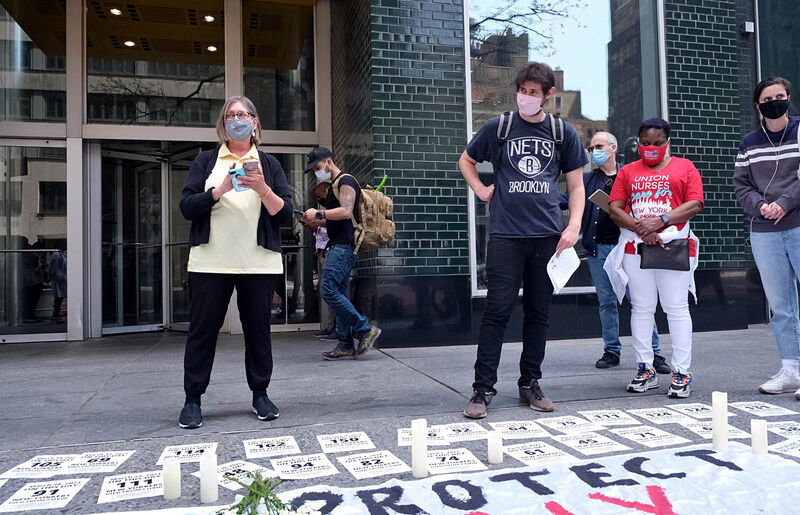 THE WAIT WAS WORTH IT: It was eight days after workers gathered outside Governor Cuomo's Midtown offices to pressure him, on the final day when he could act, that he finally signed the NY HERO Act into law, creating the first state private-sector workplace-safety standards connected to airborne diseases. Advocates hailed it for both the benefits for those affected and the national precedent it set.

Governor Cuomo's May 5 signing the HERO Act made New York the first state to adopt enforceable occupational-health workplace standards for the coronavirus and other airborne diseases covering private-sector businesses.

The bill, which covers private employers, also empowers workers at businesses with 10 or more employees to create committees to petition management about job-condition concerns.

It's estimated by the Guardian Newspapers and Kaiser Health News that 453 health-care workers in New York State lost their lives fighting the pandemic. the New York Committee on Occupational Safety and Health has estimated that 250,000 essential workers were sidelined by the virus, with another 150,000 experiencing an asymptomatic infection, which health experts warn may have long-term health consequences.

"When the COVID-19 pandemic began, it quickly became clear that New York's employers weren't taking adequate steps to protect their workers from airborne infectious disease," Mr. Cuomo said in a statement. "The state acted quickly to lay down basic guidelines through Executive Orders, but it was clear that a permanent, legislative solution was needed."

"Make no mistake what we did with the passage of this law is to save lives," Queens State Sen. Michael Gianaris, the bill's prime sponsor in the Senate, said on a May 6, Zoom press conference. "There were a number of people we know lost their lives because protections were not in place in their workplace last year."

The bill calls for employers to be fined up to $10,000 a day if they fail to comply with the worker-safety standards.

'Will Keep Us Safe'

"This is the first of its kind and it will keep us safe by making sure we are prepared, that we are proactive in the face of any other pandemic, or any other infectious airborne disease," said Assembly sponsor Karines Reyes, a registered nurse and longtime New York State Nurses Association activist.

She noted that a similar law was passed last year to protect the state's public-sector workforce.

"Among the many lessons learned during this pandemic is the close connections between the workplace and the community," Stuart Applebaum, the president of the RWSDU, told reporters. "Workers who contracted COVID-19 brought the disease back to their homes and communities."

The HERO Act was a top legislative priority for the State AFL-CIO and the NY Essential Workers Coalition, which includes more than 75 unions, worker centers, immigrant-rights organizations, legal-service providers, health and safety groups, and community-based organizations.

Maritza Silva-Farrell, the executive director of ALIGN, a labor and immigrant-rights non-profit, said, "This law is a major new national precedent for how to create enforceable health and safety protections for workers on the front-lines of the COVID pandemic."

"New Yorkers of color, women, and immigrants have disproportionately shouldered the burden of this public health crisis and have too often had to make the impossible choice between their own health and a paycheck," said New York Civil Liberties Union executive director Donna Lieberman.

The Governor signed the bill on the last day he could take action.

The bill, while mustering bipartisan support in the Legislature, was unpopular with business groups including the National Federation of Independent Business, which maintained it would further undermine the ability of small businesses to adapt to evolving state guidelines on capacity and hours of operation.

The Lawsuit Reform Alliance of New York, which advocates for the business and the insurance sector, objected to an original provision that would have permitted plaintiff lawyers to bring lawsuits against companies for not being in compliance.Tom Stebbins, its executive director, said it was "happy to see the bill amended to include a grace period for businesses to comply before being sued."

Mr. Gianaris told reporters the amendments would be introduced before the end of the legislative session in June

"There will be an opportunity for employers to fix any violations—a 30-day window after they are notified of violations," he said.