DC 37 Doesn't Bring the Noise, But Adams Brings the Drama 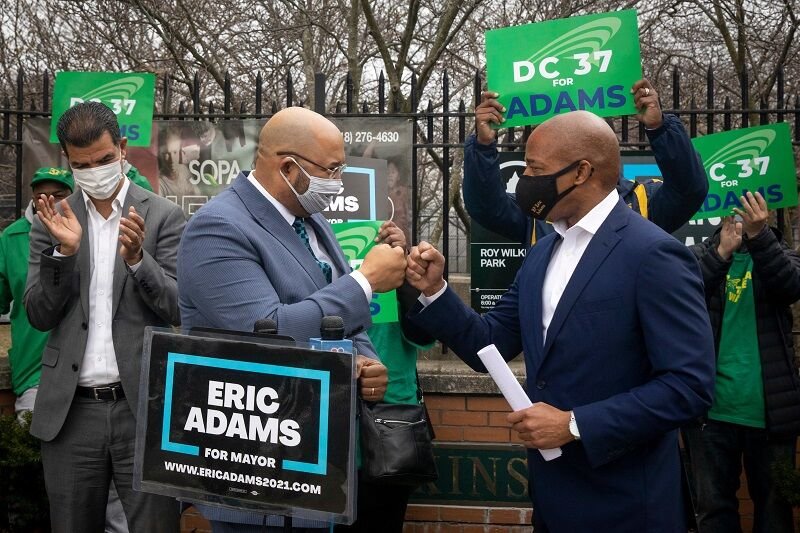 DUE PROCESS TAKES TIME: While the Department of Citywide Administrative Services originally set Thanksgiving as the deadline for rulings on all vaccine-exemption applications for religious or medical reasons, District Council 37 Executive Director Henry Garrido said the growth in applications to more than 22,000 has made March--when Eric Adams will be in office--a more-realistic target date for completing the process.

There was no suspense to District Council 37's March 24 endorsement of Eric Adams for Mayor, which had been a foregone conclusion since the union announced he had the backing of its executive board two weeks earlier.

Nor, because of the pandemic, was there the hoopla that would have accompanied the announcement had it been held in familiar locales like City Hall Plaza or the union's cavernous Barclay St. conference room, where packed crowds would have trumpeted the significance of the 150,000-member group throwing its weight behind the Brooklyn Borough President.

So a union contingent of 15 that included several key local presidents and Executive Director Henry Garrido provided a more-intimate launch in Roy Wilkins Park in Jamaica, not far from where Mr. Adams used to watch his mother head off to a job as a day-care worker—and DC 37 member—that gave her a modest paycheck and leftover food she would bring home to feed her six children. That left it to the candidate to supply the drama.

Which he did, proclaiming that if his mom had lived to see this moment, "I know she would be proud" that "her son who was beaten by police officers in the 103rd Precinct" would have become the unusual hybrid of NYPD cop/in-house activist who retired as a Captain, and before this year ends, could be in a position to run the department.

Earlier that morning, a poll had been released showing that while 50 percent of those surveyed were undecided about their choice in a Democratic primary that was just 90 days away, Mr. Adams was running second with 10 percent, six points off the frontrunner.

He assured the cluster of supporters and the smaller media contingent that this was a temporary condition, asserting that at this point in time, "This is a city where the leader must be a worker. Andrew Yang has never held a job in his life."

Mr. Yang, who was the choice of 16 percent of those surveyed, is best known as the engaging millionaire who ran for President in 2020 on a platform built around the universal basic income that was first popularized by Facebook's Mark Zuckerberg four years ago. Mr. Yang had pledged then that if elected he would give every American $1,000 a month.

Asked by one reporter about his rival's lofty position despite his admission that he'd spent much of his time last year outside the city because it had become a tough place to raise young children in a two-bedroom Manhattan apartment, Mr. Adams scoffed at what he called "a UBI that's a UB lie. We can't continue to use this trickery for votes."

Mr. Yang's campaign manager, Chris Coffey, texted in response, "Andrew Yang has started and managed a business, created thousands of jobs, and unlike Eric run something larger than a small political office." He accused Mr. Adams of "trying to divide' rather than unify.

In explaining the union's choice in what he called "the most-important election in our lifetime"—or at least since Biden vs. Trump—Mr. Garrido said his members wanted "somebody who understood our values. Somebody who understood the importance of the role essential workers are playing for the City of New York."

Referring to the roughly 150 DC 37 members who died from the coronavirus, he continued, "Our members have given their lives—the ultimate sacrifice—to continue to provide services. Many of our members are worried about coming back to work. Many of them are scared—and they should be," given uncertainty about sufficient personal protective equipment and masks, and agencies' ability to assure social distancing in office settings.

Mr. Adams noted the presence of Anthony Wells, the head of Social Service Employees Local 371 and himself someone who'd been stricken by the virus, and said he'd informed him that early in the pandemic his members were ordered by supervisors not to wear PPE.

Even so, he said, "They didn't forget our city. When others fled, they led."

'I Understand Your Fight'

"We need a blue-collar Mayor to run a blue-collar city," the Borough President said, using the cadence and rhyming slogans popularized by Jesse Jackson and Muhammad Ali. "I'm not a new friend—I'm an old friend. I understand your fight, I understand your plight. We don't need someone who has never gotten up in the middle of the night to eke out a living for their family. We need someone who understands what it is to be a union member."

That populism co-exists with fund-raising that has leaned heavily on contributions from city real-estate developers. But the endorsement by DC 37, the breadth of whose membership was represented by the presence of School Employees Local 372 President Shaun Francois—whose rank and file are some of the city's lowest-salaried workers--and Treasurer Maf Misbah Uddin, who as head of Local 1407 represents considerably better-paid Accountants and Actuaries, coupled with the backing a couple of weeks earlier of Building Service Workers Local 32BJ, were key brush-strokes in Mr. Adams's self-portrait.

"It is time for us," he said, "to have a Mayor who has gone through a lot to help people who are going through a lot."

Asked about the Racial Justice Commission announced by Mayor de Blasio the previous day that will have Mr. Garrido as its co-chair, Mr. Adams replied, "I believe every decision we make in this city, we need to have a racial equity test to it. Look at the pay inequities: look at who's making the most in the city...and look at who's doing the hardest work."

It sounded like a reference to the nearly-$35,000 salary gap between Emergency Medical Technicians and Firefighters at top pay, even though the EMTs last year handled coronavirus emergency calls by themselves because of concern that firefighters who became infected might spread the disease to their entire firehouses.

Pressed afterward about how quickly, in a city where pattern bargaining has historically made it tough for one employee group to make up ground in a hurry unless it brought a successful lawsuit claiming wage discrimination, he would end that disparity, Mr. Adams replied, "pay equity," implying in one swoop.

"They go into some of the most-difficult environments," he explained. "You're asking them to do more, but you're not giving them more. There are certain things that are on my checklist as soon as I walk in" to City Hall as Mayor. That will be one of them, he said along with "civilianization in the Police Department," a longtime goal of DC 37, which has questioned the need to have thousands of police officers handling desk jobs that it argues could be performed by its members for lower salaries and less-generous pension provisions.

What Union Will Do

Mr. Garrido, asked what his union would do to get out the vote for Mr. Adams in the June 22 primary, said that while some traditional methods are impractical while the pandemic remains a threat, "We intend to talk to every single member, every single retiree," often by having members contact each other rather than relying on local presidents to spread the word.

He said the union, which two days earlier announced that it would be arranging vaccine appointments for active members, would assist both them and retirees in obtaining mail ballots if they needed them. It will also, he said, conduct "a massive social-media campaign."

The size of DC 37 is not the only reason its endorsement is considered a significant prize in the mayoral campaign. Its members, Mr. Garrido stressed, "vote, and they vote with their interests."