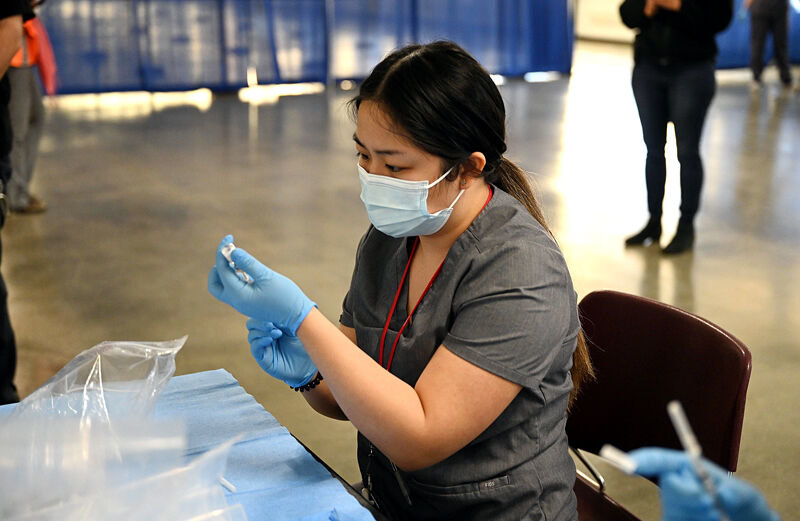 NEEDLED: While thousands of workers in hospitals, nursing homes, long-term care facilities and other institutions face suspensions and ultimately termination because they did not meet the state vaccination mandate’s conditions, predicted staff shortages have not materialized. Above, a vaccination site opened at Stony Brook University Jan. 18, when health-care workers became eligible for the inoculations.

Photo courtesy of Kevin P. Coughlin/Office of the Governor
Posted Monday, October 4, 2021 11:00 am
By RICHARD KHAVKINE

Fears that hospitals, clinics, nursing homes and other facilities would be short of staff as the state’s vaccination mandate took hold Sept. 27 look to have been exaggerated, with the August edict compelling health-care workers to get jabbed or risk losing their jobs appearing to have had an effect.

As of Sept. 29, two days after the rule went into effect, 92 percent of hospital staff had received at least one dose of vaccine, and 87 percent were fully vaccinated, up from 77 percent Aug. 24, according to data released by Governor’s Hochul’s office.

"I am grateful to the facilities, unions, and health-care workers who took important steps to prepare and protect New Yorkers, and we are working with facilities to ensure they remain operational," the Governor said Sept. 29.

The mandate, issued by then-Gov. Andrew Cuomo Aug. 16, requires workers in hospitals and long-term-care facilities, including nursing homes, to have received a first dose of coronavirus vaccine or risk termination. It is unclear how many might have lost their jobs because they did not get inoculated, but dozens of health-care workers who are members of United University Professions had been suspended as of Sept. 29.

They included 43 workers at Stony Brook, 75 at Downstate and about 20 at Upstate, said a union spokesman, Mike Lisi.

Still UUP, which represents about 13,000 health-care workers, among them doctors, pharmacists and nurse practitioners at state facilities, including SUNY spots in Brooklyn and Syracuse, estimates that more than 98 percent of its members are vaccinated.

Although the union succeeded in retaining due-process rights for those members who were not vaccinated by the deadline and will represent them during any subsequent disciplinary process, Mr. Lisi said, their options are limited. “If the unvaccinated employees choose to forego getting vaccinated, they will be terminated from their jobs once disciplinary proceedings end,” he said by email.

State Health Department spokeswoman Abigail Barker said in a statement, “It is up to covered entities to develop a plan for implementation of the mandate and what happens if employees do not comply. Their plans could include termination.”

A number of lawsuits have been filed seeking to overturn the mandate’s provisions. The New York Times reported that they include court actions by health-care professionals who claim the mandate did not carve out sufficient exemptions and at least one alleging that Governor Cuomo exceeded his authority in issuing the mandate without first getting the State Legislature's approval.

The Public Employees Federation, which represents 5,861 Nurses at those hospitals, estimated that just a few hundred had not met the mandate’s conditions, according to spokesman Rob Merrill. But he added that the number of Nurses who got inoculated in recent days was better than expected.

“We’re pleased many PEF members choose to get vaccinated in advance of the deadline and we’re going to continue to educate our members that vaccination does work if it fits their particular circumstances,” he said. “But we’re also a union that represents the rights of all of our members, and those who choose not to get vaccinated and therefore face discipline we’re going to represent them in any way we can.”

To address potential staffing shortages in hospitals and other health-care facilities, the Governor issued an executive order Sept. 27 that, among other things, for 30 days permits doctors and Nurses licensed by other states and countries that are in good standing with health officials to practice in New York. Physician's assistants, radiologists, respiratory therapists are also covered, and pharmacists, dentists, lab techs, psychologists, midwives and dozens of other specialists licensed by other states can now also ply their trades in New York.

NYC Health + Hospitals staff had by and large complied with the mandate, with the system’s president and CEO, Mitchell Katz, saying Sept. 28 that over 95 percent of Nurses were fully vaccinated. A day later he said that 92 percent of roughly 43,000 Health + Hospital employees were vaccinated, leaving just over 3,000 who were not. He suggested that number was decreasing as more workers came for inoculation as their scheduled shifts drew closer.

“We do have temporary staffing of about 500 Nurses who are filling in for those Nurses who have not yet gotten vaccinated or have chosen for retirement,” he said during Mayor de Blasio’s Sept. 29 press briefing.

No H+H worker had yet been fired, Dr. Katz said. “And we do not intend to. We still have an open invitation to all of the people who are not yet vaccinated to please get vaccinated and join back to the health system with the best mission in the world.”

A day earlier he had said he hoped that the salaries tied to employment would be adequate motivation for people to get vaccinated.