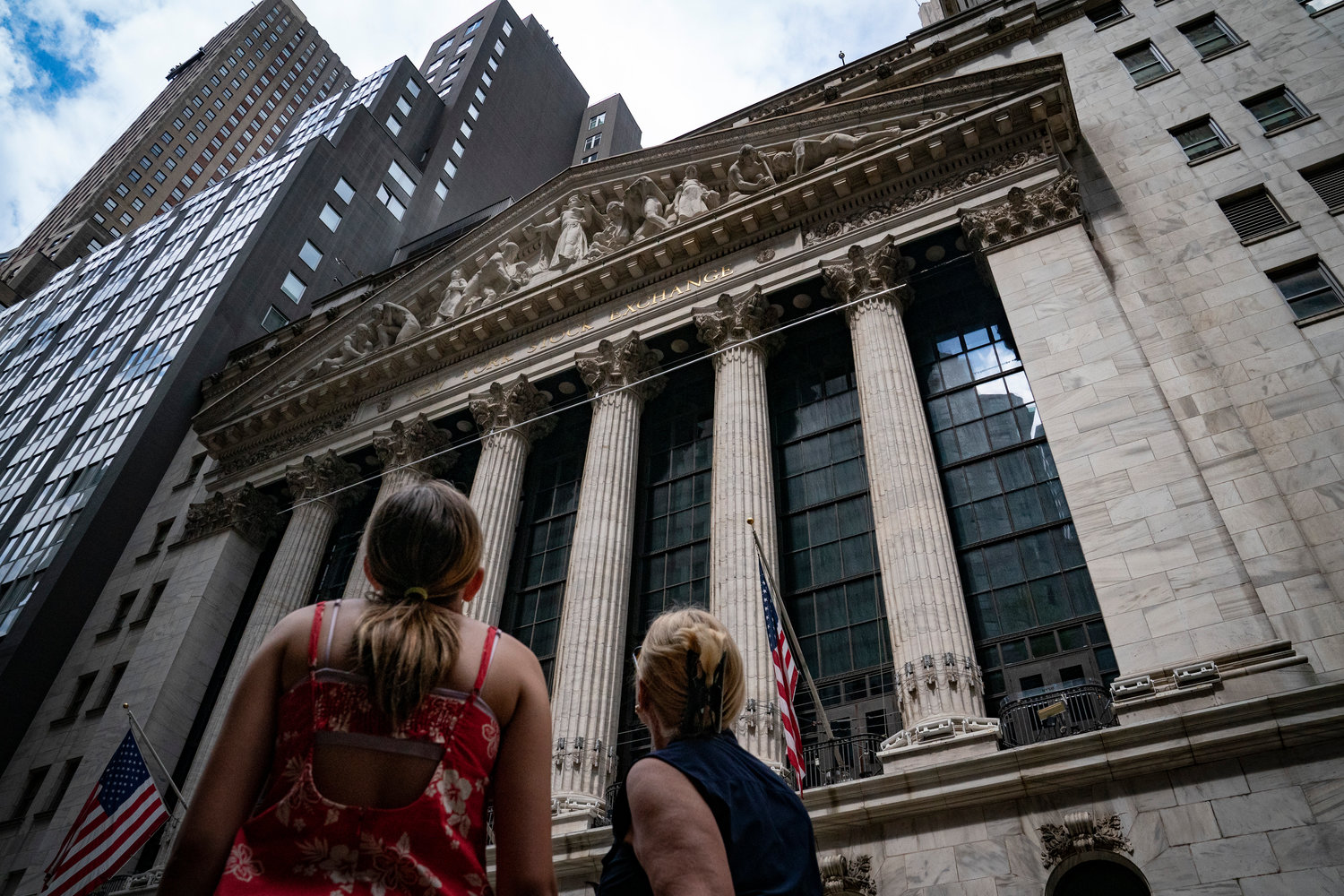 People walked past the New York Stock Exchange July 14. The U.S. economy is caught in an awkward, painful place. A confusing one, too. Growth appears to be sputtering, home sales are tumbling and economists warn of a potential recession ahead. But consumers keep spending, businesses keep posting profits and the economy keeps adding hundreds of thousands of jobs a month.
John Minchillo/AP Photo
Posted Tuesday, July 26, 2022 2:51 pm
BY PAUL WISEMAN

The U.S. economy is caught in an awkward, painful place. A confusing one, too.

Growth appears to be sputtering, home sales are tumbling and economists warn of a potential recession ahead. But consumers are still spending, businesses keep posting profits and the economy keeps adding hundreds of thousands of jobs each month.

In the midst of it all, prices have accelerated to four-decade highs, and the Federal Reserve is desperately trying to douse the inflationary flames with higher interest rates. That's making borrowing more expensive for households and businesses.

The Fed hopes to pull off the triple axel of central banking: Slow the economy just enough to curb inflation without causing a recession. Many economists doubt the Fed can manage that feat, a so-called soft landing.

Surging inflation is most often a side effect of a red-hot economy, not the current tepid pace of growth. Today's economic moment conjures dark memories of the 1970s, when scorching inflation co-existed, in a kind of toxic brew, with slow growth. It hatched an ugly new term: stagflation.

The United States isn't there yet. Though growth appears to be faltering, the job market still looks quite strong. And consumers, whose spending accounts for nearly 70 percent of economic output, are still spending, though at a slower pace.

So the Fed and economic forecasters are stuck in uncharted territory. They have no experience analyzing the economic damage from a global pandemic. The results so far have been humbling. They failed to anticipate the economy's blazing recovery from the 2020 recession — or the raging inflation it unleashed.

Even after inflation accelerated in spring of last year, Fed Chair Jerome Powell and many other forecasters downplayed the price surge as merely a "transitory" consequence of supply bottlenecks that would fade soon.

Now the central bank is playing catch-up. It's raised its benchmark short-term interest rate three times since March. Last month, the Fed increased its rate by three-quarters of a percentage point, its biggest hike since 1994. The Fed's policymaking committee is expected to announce another three-quarter-point hike Wednesday.

Economists now worry that the Fed, having underestimated inflation, will overreact and drive rates ever higher, imperiling the economy. They caution the Fed against tightening credit too aggressively.

Here's a look at the economic vital signs that are sending frustratingly mixed signals to policymakers, businesses and forecasters:

As measured by the nation's gross domestic product — the broadest gauge of output — the economy has looked positively sickly so far this year. And steadily higher borrowing rates, engineered by the Fed, threaten to make things worse.

"Recession is likely,'' said Vincent Reinhart, a former Fed economist who is now chief economist at Dreyfus and Mellon.

After growing at a 37-year high 5.7 percent last year, the economy shrank at a 1.6 percent annual pace from January through March. For the April-June quarter, forecasters surveyed by the data firm FactSet estimate that growth equaled a scant 0.95 percent annual rate from April through June. (The government will issue its first estimate of April-June growth on Thursday.)

Some economists foresee another economic contraction for the second quarter. If that happened, it would further escalate recession fears. One informal definition of recession is two straight quarters of declining GDP. But the most widely accepted authority is the National Bureau of Economic Research, whose Business Cycle Dating Committee assesses a wide range of factors before declaring the death of an economic expansion and the birth of a recession. It defines a recession as "a significant decline in economic activity that is spread across the economy and that lasts more than a few months."

What's agitating consumers is no secret: They're reeling from painful prices at gasoline stations, grocery stores and auto dealerships.

The Labor Department's consumer price index skyrocketed 9.1 percent in June from a year earlier, a pace not seen since 1981. The price of gasoline has jumped 61 percent over the past year, airfares 34 percent, eggs 33 percent.

Despite inflation, rate hikes and declining consumer confidence, one thing has remained solid: The job market, the most crucial pillar of the economy. Employers added a record 6.7 million jobs last year. And so far this year, they're adding an average of 457,000 more each month.

The unemployment rate, at 3.6 percent for four straight months, is near a half-century low. Employers have posted at least 11 million job openings for six consecutive months. The government says there are two job openings, on average, for every unemployed American, the highest such ratio on record.

Job security and the opportunity to advance to better positions are providing the confidence and financial wherewithal for Americans to spend and keep the job machine churning.

Rejected by courts, retirees take last shot to save pensions

Long lines are back at food banks as inflation hits high