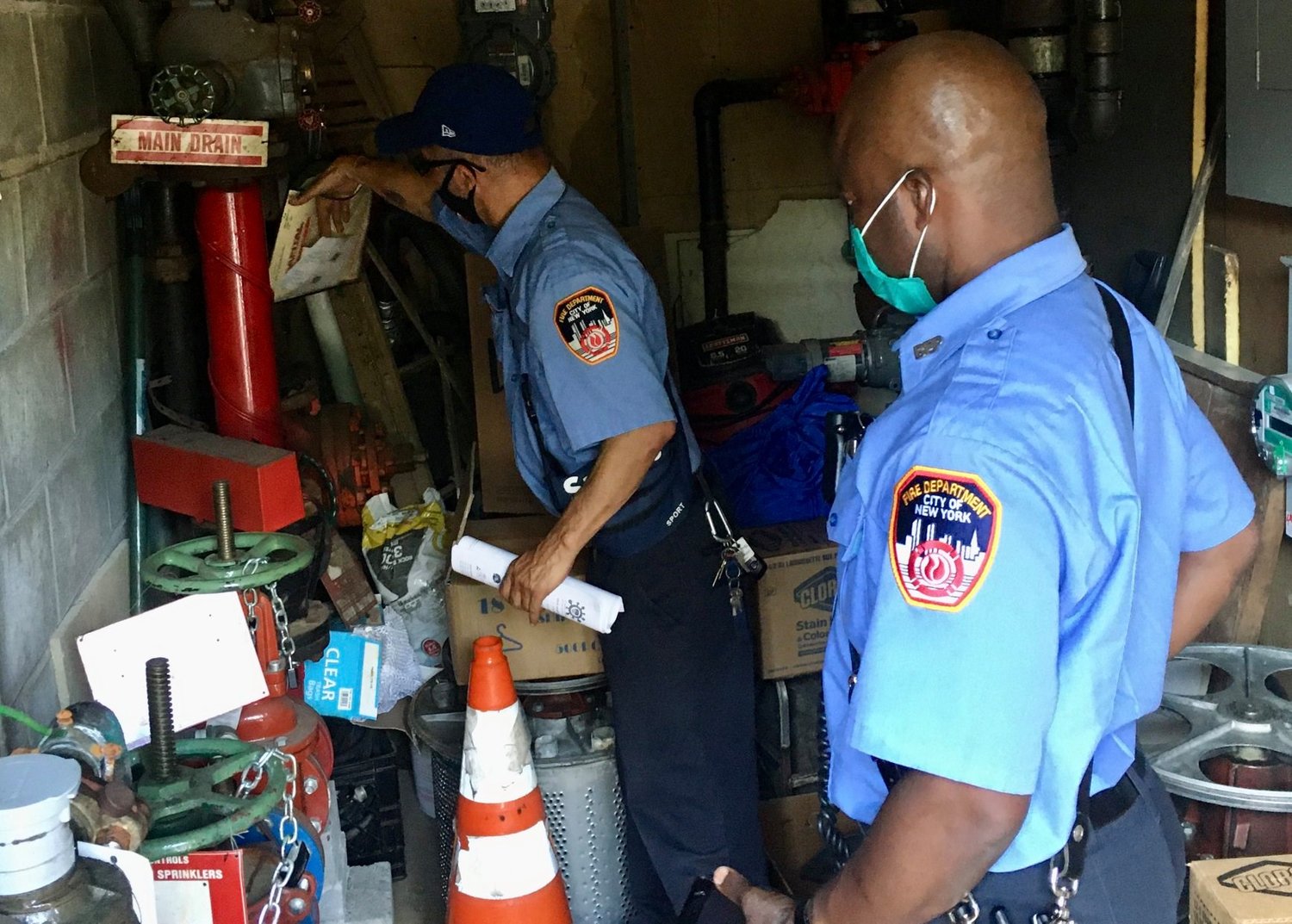 FDNY fire protection inspectors on the job during the summer 2020 reopening of businesses. A federal complaint by the inspectors alleges that the city discriminates against them for paying them far less than they do Department of Building inspectors. The inspectors also want a route to firefighter posts.
Courtesy FDNY
Posted Monday, September 26, 2022 2:58 pm
BY DUNCAN FREEMAN

Following a federal judge’s certification of a class-action complaint brought by FDNY fire protection inspectors regarding salaries, the inspectors and labor leaders are now calling for more respect within the FDNY.

“It's not just about the money. We don’t even get recognized for the work we do,” Darryl Chalmers, a deputy chief fire inspector and the complaint’s lead plaintiff, told The Chief. “We are never recognized by the fire department properly.”

Fire inspectors argue that the city has discriminated against them by paying them far lower salaries than they do Department of Buildings inspectors. Fire inspectors, at least 70 percent of whom are people of color, make a starting salary of $46,607, which climbs to $53,598 after two years. They make on average $9,000 less than building inspectors, a majority of whom are white.

In her ruling earlier this year, U.S. District Court Judge Analisa Torres found that fire inspectors “face greater physical risks in the course of their work,” than other building inspectors because they may be required to “inspect hazardous or combustible materials or enter collapsed buildings, buildings where fires are still smoldering or have recently been extinguished, or buildings in which poisonous fumes or toxic materials are still present.”

A spokesperson for the city’s Law Department said the city opposed the motion for class certification since  “There has been no court decision on the merits of discrimination by the city."

“The two positions differ significantly in terms of educational requirements and responsibilities, and the salaries are determined by negotiations with the unions,” the spokesperson said.

The “main job” of fire inspectors, said Chalmers, “is to make sure that firefighters can get water” when fighting fires in city buildings. Inspectors routinely tour city buildings to ensure that “systems are working properly for firefighting operation,” and return after a fire occurs to help guide repairs and reassess water systems, he said.

A route to promotion

"Our fire inspectors are predominantly people of color, and for years the department and the city has treated them as second-class citizens while they do dangerous work,” said Oren Barzilay, president of Local 2507, which represents fire inspectors and ems workers. An FDNY spokesperson declined to comment, deferring comment on the litigation to the Law Department.

Barzilay and other EMS union officials have been advocating for years for fire inspectors and EMS  workers to achieve pay parity with firefighters. At a Sept. 22 City Council hearing on pay equity and “occupational segregation,” Anthony Almojera, an EMS lieutenant and the vice president of Local 3621, which represents EMS officers, testified that “the training and expertise of EMS first responders is highly intense and substantially more than a firefighter.”

Almojera and Barzilay both argued at the hearing that EMS employees respond to many of the same emergencies as firefighters and work alongside them in many cases. Despite this, a pay disparity persists, and Almojera argued that “there is no nondiscriminatory explanation for that. … While the environment and demands of FDNY first responders are similar, what is different is the racial and gender makeup.”

Chalmers said acting FDNY Commissioner Laura Kavanagh “has been helping us out to make changes,” but that much more needs to be done. As the FDNY comes under fire from policymakers on the department’s lack of diversity and pay disparity for minorities, Chalmers is encouraging the department to tap into the fire inspectors already on the payroll: “Take the 85 percent minority group in the FDNY who have the expertise ... and give them that same avenue to promotion to firefighter.”