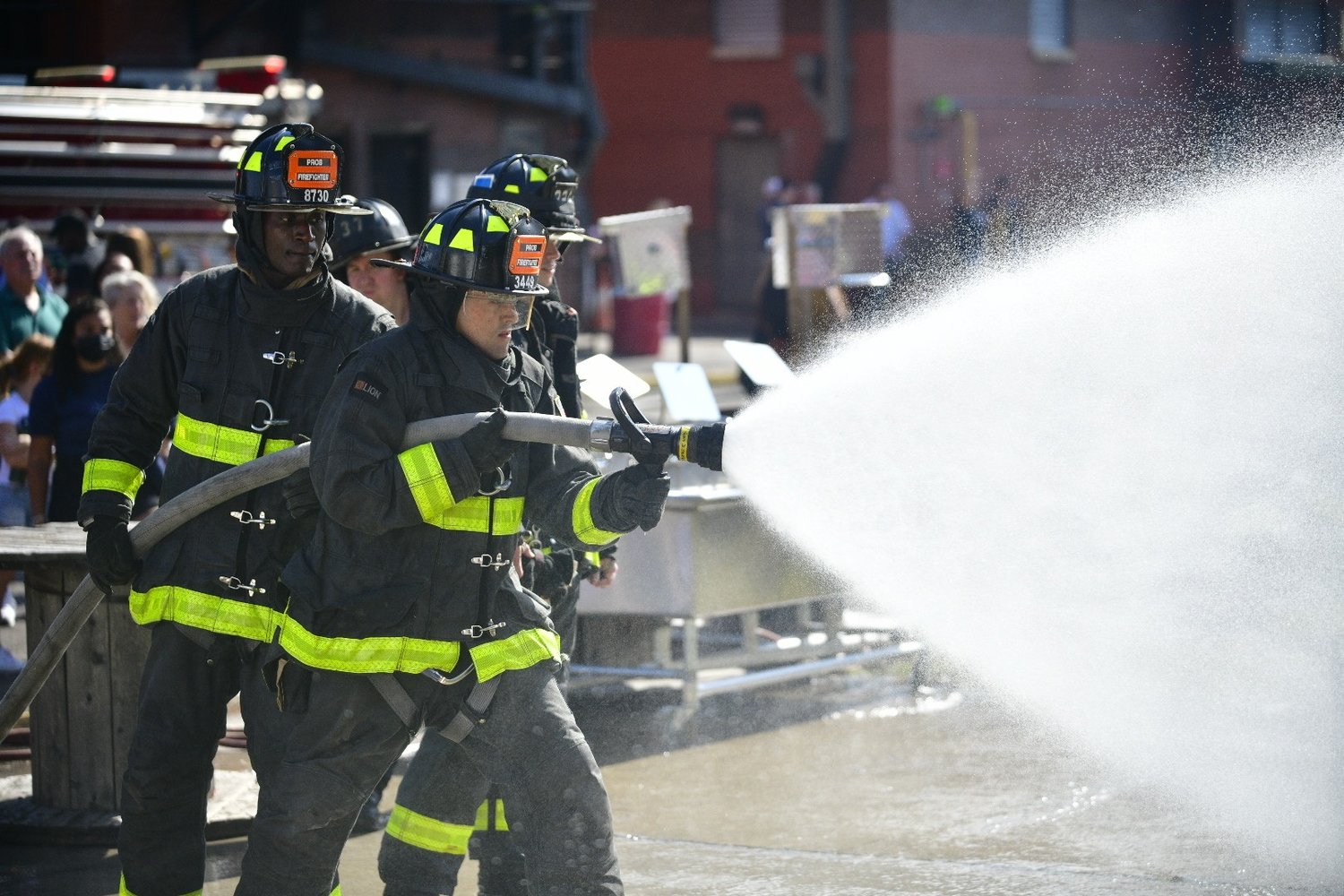 A NEW FIRE TO PUT OUT: The Fire Department earlier this year suspended nine Firefighters who shared racist memes mocking George Floyd's murder by a white Police Officer in Minneapolis, with one of them agreeing to resign when his six-month suspension ends rather than face firing. It was the latest racial conflagration for the FDNY, and followed a situation last year when black firefighters reached out to Eric Adams to intervene with top department officials after three Lieutenants advocated using fire hoses on black protesters, a tactic made infamous by racist white officials in the Deep South during the Civil Rights Movement.

The Fire Department is dealing with another race-related embarrassment after the New York Times reported that nine Firefighters were suspended earlier this year for mocking the murder of George Floyd by a Minneapolis Police Officer and three Lieutenants had suggested using fire hoses against demonstrators here who protested the May 25, 2020 death on city streets.

The head of the Vulcan Society, a fraternal organization for black firefighters cited another incident the Times article described in which a black firefighter alleged he was taunted with a racial slur and assaulted by a white man who was drinking with white firefighters at their firehouse and they did not intervene, saying, "It's just so ugly for the department."

The Oct. 1 Times article, headlined "How a Racist Scandal at the F.D.N.Y. Led to Its Biggest Suspensions Ever" reported that several "white firefighters shared racist messages and memes on their phones mocking Mr. Floyd's dying moments" and "gloated about how police could 'legally shoot Black children.'"

Fire Commissioner Daniel Nigro told The Times he felt "revulsion" when he saw what the Firefighters had shared on social media and said that when they were confronted after a black firefighter saw the images six months ago and made a complaint, they said they thought the images were humorous.

"A man died in the street, and you're using that image as some sort of humor?" Mr. Nigro told the newspaper.

The Times reported that nine firefighters were suspended without pay, with the most-serious offender getting a six-month ban and agreeing to resign when it ended to avoid being fired.

An FDNY spokesman said one of the other Firefighters received a 45-day suspension without pay, another got a 30-day ban, and two others received 20-day unpaid suspensions. His email noted that at least one supervisor was among those sanctioned.

Deputy Fire Commissioner for Public Information Frank Dwyer noted in an email detailing the "nearly 300 days" in suspensions for the group, , "These are some of the harshest penalties the Department has ever adjudicated, which sends a strong and direct message that this kind of behavior will not be tolerated and has no place in the FDNY."

He also had to address a glaring oversight for which responsibility rested higher up the chain of command: until 2019, a Fire Department training bulletin for managers stated, "Motivation in firefighting is largely a matter of team building. Team building encounters special problems when the team has to readjust to new members, minorities or females, or members who are problems because they do not behave."

Mr. Dwyer told The Times that the guidance was written in 1997 but was not removed until two years ago as part of an effort by the FDNY to purge outdated language. "This does not reflect the FDNY today," he said, pointing out that a firefighting force that was 93-percent white a quarter-century ago is now 75 percent white.

Most of the progress in getting more people of color into the ranks has resulted from an agreement reached by the de Blasio administration in 2014 to address a Federal Judge's finding that the city had repeatedly held discriminatory exams for Firefighter. As part of the settlement, the department has held intensive recruiting drives to attract more candidates of color to take the redesigned exam.

The Times also recounted how, during protests over Mr. Floyd's murder that reached their peak in June last year, black firefighters were concerned enough after learning that three white Lieutenants had suggested using hoses to spray the protesters—evoking memories of the racist Public Safety Commissioner of Birmingham, Ala., Bull Connor, deploying them against civil-rights marchers—that they got Brooklyn Borough President Eric Adams, to intervene with top FDNY officials.

Vulcan Society President Dellon Morgan said in a phone interview that he was particularly disturbed by the account in The Times of the complaint by Firefighter Alonzo Baker that his white colleagues did nothing to control the civilian who he alleged taunted and assaulted him.

"It hurt me because I know him personally," he said. "Nobody should put their hands on somebody else like that but that it could happen in a firehouse, it's just so ugly for the department. It's ugly for everybody involved...You work so hard and somebody does something like that."

Uniformed Firefighters Association President Andy Ansbro, however, while emphasizing he was not talking about  the incidents detailed in the Times story, said that in some instances where firefighters of color took offense, disciplinary charges were brought after apologies by white firefighters had been made and were accepted by the aggrieved parties.

'A Life of Their Own'

He explained that "because of the FDNY mandatory reporting [of such incidents], the case ends up in front of the Bureau of Investigations and Trials or [the Equal Employment Opportunity office] anyway. Then these things take on a life of their own. It's very hard to have a learning experience when the member is now under investigation and the outcome can be to take food off their table. This can blow up a whole firehouse, and creates mistrust."

Mr. Ansbro added, "The department has focused extensively on the discipline aspect, and they need to do a better job on fostering conflict-resolution solutions at the firehouse level so we can move on harmoniously."

Lieut. James McCarthy, who last month was elected president of the Uniformed Fire Officers Association, said he had been influenced by his grandfathers' experience as transit workers during the days of Michael J. Quill, who as president of the Transport Workers Union was one of the first labor leaders to support Martin Luther King Jr. in his question for civil rights for black people.

He noted that critics "made disparaging remarks about Mike Quill because of his inclusiveness, but he expanded the TWU by getting everybody in it." He added that the UFOA was obligated to "champion equal access to promotions, promotional materials and a workplace where members were treated equally by each other and the administration."

According to Fire Department, 13.4 percent of firefighters are Latino, 8.2 percent are black, and 2 percent are Asian.

Oren Barzilay, who was president of District Council 37 Local 2507 represents Emergency Medical Technicians and Fire Protection Inspectors, said that "institutional problems with racism and sexism" were widespread on the both fire and Emergency Medical Service sides of the FDNY.

Referring to the offensive training memo that remained in use for 22 years, he said, "It does not go unnoticed that this official memo was written in 1997, within the first year the EMS personnel integrated into the department. I wish I could say things have gotten better, but they haven't. It is exactly this mentality of seeing diversity as a negative, not a positive, that allows the department to continue its pattern of undervaluing and underpaying those who are not white and male, and allowing discrimination to flourish."

Joe Wilson, a labor historian who advises Local 2507, predicted the Times story would have "far-reaching policy implications" and likely influence the choice of a Fire Commissioner in a new mayoral administration next year.

Mr. Adams, who is heavily favored to be elected Mayor, when asked about that story in an interview with NY1 political anchor Errol Louis that was broadcast Oct. 5, said he would be taking a careful look at the screening process for Firefighter as well as other uniformed-agency jobs.

Referring to the vetting process, which includes psychological screening, for those jobs, he said, "We have been overly aggressive when it comes down to candidates of color in all these agencies. We have really said, 'Let boys be boys' when it comes to other groups. We have taken too long to remove those who are not suitable."

But, he continued, "They're not going to have fun on the dime of taxpayers. We're going to remove you from the department."