For kids’ sake, prop up the schools budget 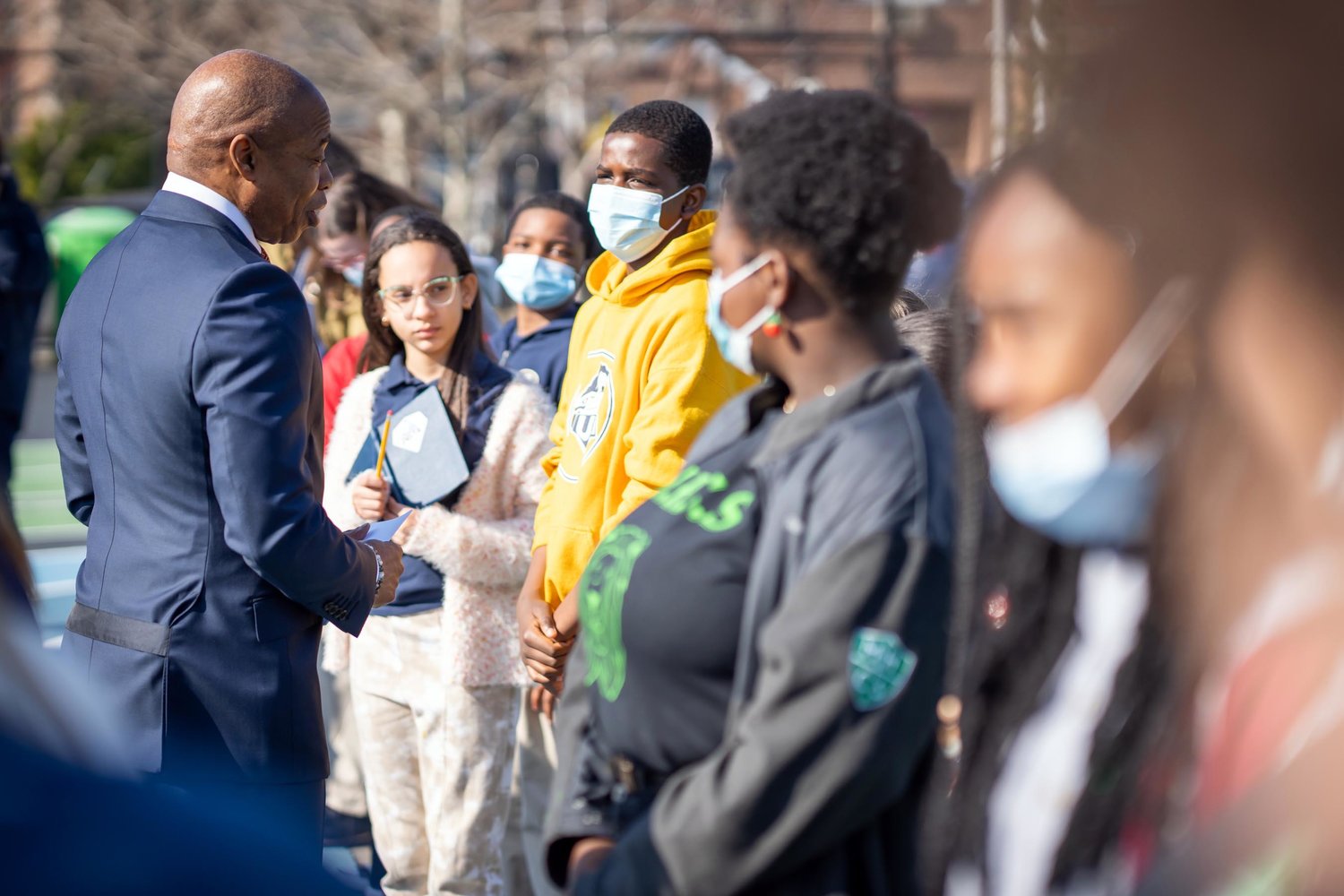 As things stand, we're in for a big fall.

Mayor Adams and the City Council have opted to let the schools budget hemorrhage. They will claim that letting the schools bleed out is an act of fiscal responsibility. They will point to declining enrollment and the small percentage of lost money and preach against our being crybabies.

Maybe they're grandstanding. This is horse-trading season. But it sure doesn't sound like they're bluffing. And burning down our schools is an odd way of fulfilling their pledge to build them up.

It is real. And reality costs money. Failure to restore $215 million in cuts to school budgets is beyond imprudent; it's treacherous. And to do it a snap-of-the- fingers in time just after the state Legislature achieved landmark legislation to lower class size after decades of struggle, is pouring lye into the wound.

It may be premature to assume the worst, although when estimating the DOE, it is default wisdom to do so. Whether the chancellor is reluctantly bound to follow orders or whether the plans are the brainchild of nitwits will not be evident from a DOE press release.

I can restrain myself from further name-calling, but not from denunciation.

The budget will be finalized on June 30th. With the cameras and microphones turned off, perhaps negotiations are still underway and our present intimations of doom can charitably be dubbed relative and not absolute. Common sense, love of our children, faith in a New York renaissance and a memory of official promises would be enough for our battling school system to dodge the bullet.

By no longer holding schools financially harmless for mid-year enrollment losses, Mayor Eric Adams is defying what had been the practice in New York.

Mercilessly slashing vital services to children is something that untouched and unmoved bureaucrats can do with a clear conscience, but it becomes more complicated for them when the optics are bad. So they must make sure that echoes of their professed affections bounce off the walls of sympathetic media studios.

The mountain of federal education dollars for our public schools should overshadow, or at least offset, the molehill of inched-down student registers. If money could talk, it would scream "outrage!"

Hundreds of millions of education dollars are slashed from the mayor's executive budget, even though around $4.6 billion of federal stimulus money remains untapped. "This additional funding was supposed to hold schools harmless," noted the president of the United Federation of Teachers, Michael Mulgrew, whose teachers union commits enormous energies to securing educational justice.

The City Council has traditionally been a bulwark for public education. Having a justifiably respectful relationship with the mayor doesn't mean they need to be in his pocket. I trust that they have their eyes, ears and minds open to the facts and will be driven by fairness to be on board with the UFT and all New Yorkers who seek to correct the folly of budget cuts.

If the mayor's budget cuts stick, the centerpiece of its devastation will be the class-size mandate  In effect, it would be negated by the impossibility of implementation. As described in my column recently, it would have, for the first time in ages, made New York City's class size decently competitive with almost 700 other districts in the state. Now the generation-long initiative to attain this research-based tonic is being held hostage, may be crippled and even annulled not by rational priorities or reasonable policy, but by failure of will.

Chancellor David Banks demeans the class size rescue by calling it "an unfounded mandate."   The city has chosen not to afford it.

Anyone who denies or is undecided about the benefits of lower class size is beyond the reach of logic. There are more studies affirming it than there are grains of sand on the Riviera. So far as they're concerned, each grain of sand might as well represent another student in a teacher's class.

They all send their own kids to private schools that ballyhoo small teacher-to-student ratio as their prime selling point.

These are the hardcore folks who are in harmony with the New York Post's repeated assertion that the campaign for lowering class size was always a scheme by the teachers union, which  "would love any step that would boost the need to hire more teachers … and what teacher wouldn't want as few students, and as little work, as possible?"

The Post's piece (and the paper's many allies in the privatization and union-busting "reform" movements") has a cure for any and all problems that have arisen or may ever in the future challenge our resolve: "improve teacher quality … which unions typically resist."

There's a disconnect between the Post's make-believe championing of the rights of students to a quality education and their loathing of the educators who deliver it.

A recent opinion piece in that paper outright asserted the falsehood that the teachers union has "veto" power over the DOE. Truth cannot lance the boil of their trademark demagoguery.

Even if the opinion writer conceded, for instance, that lower class size is desirable (a no-brainer even for their no-brain editorial board), they'd repress the revelation. because they are congenitally incapable of agreeing with the teachers union on anything.

On the issue of control over NYC schools, the opinion piece warned not to "outsource the job to the teachers unions."

To that warped thinking, it would "shackle" the schools and pander to the teachers union if their members were freed to devote more attention to the individualized needs of their students. Riding the teachers is no way to jockey for public support.

The city's income revenues are far above projections. Mayor Adams insists: "We're not cutting; we are adjusting the amount based on the student population." That's semantic chicanery. More a confidence game with words than a painstaking interpretation.

The Fair Student Funding formula, (a bible with which bean counters play fast and loose) is as fair as the Democratic People's Republic of China is democratic.

Algorithms are in charge of humans.

Too numerous to mention, other educational programs will be hammered by the stingy budget.  There will be casualties for all ages. The recovery from post-pandemic academic setbacks and the documented mental health crisis it has wrought, demands more school social workers, psychologists and counselors. Caseloads are exploding and the pressures are intensifying.

Many other essential programs, sometimes wrongly characterized as "elective" or "enrichment" (which are not frivolous) may be hit. So may be the UFT Teacher Centers, which provide by far the most respected professional development training in the city, and the Dial-A-Teacher service, which offers free homework help in many subjects and languages. Also, the Positive Learning Collaborative, the United Community School and BRAVE, a hotline for bullied students.

That's the tip of the iceberg of ministry, except the iceberg, in this case, is redemptive and would stabilize the ship, not sink it.

Before gutting or even nicking our classrooms, the DOE should dig and scoop out the blubbery wasteful mass at their HQ.

This is the end-game. The budget must be salvaged. Fighting for kids should not be a contact sport. Scoring points in a self-destructive contest of power-plays is madness. Let's everybody contact the mayor and our City Council members and push hard for a viable budget for our schools.

Elephants, in the room at City Hall and in DA’s offices

Teacher Burnout: Who Put Out the Fire?