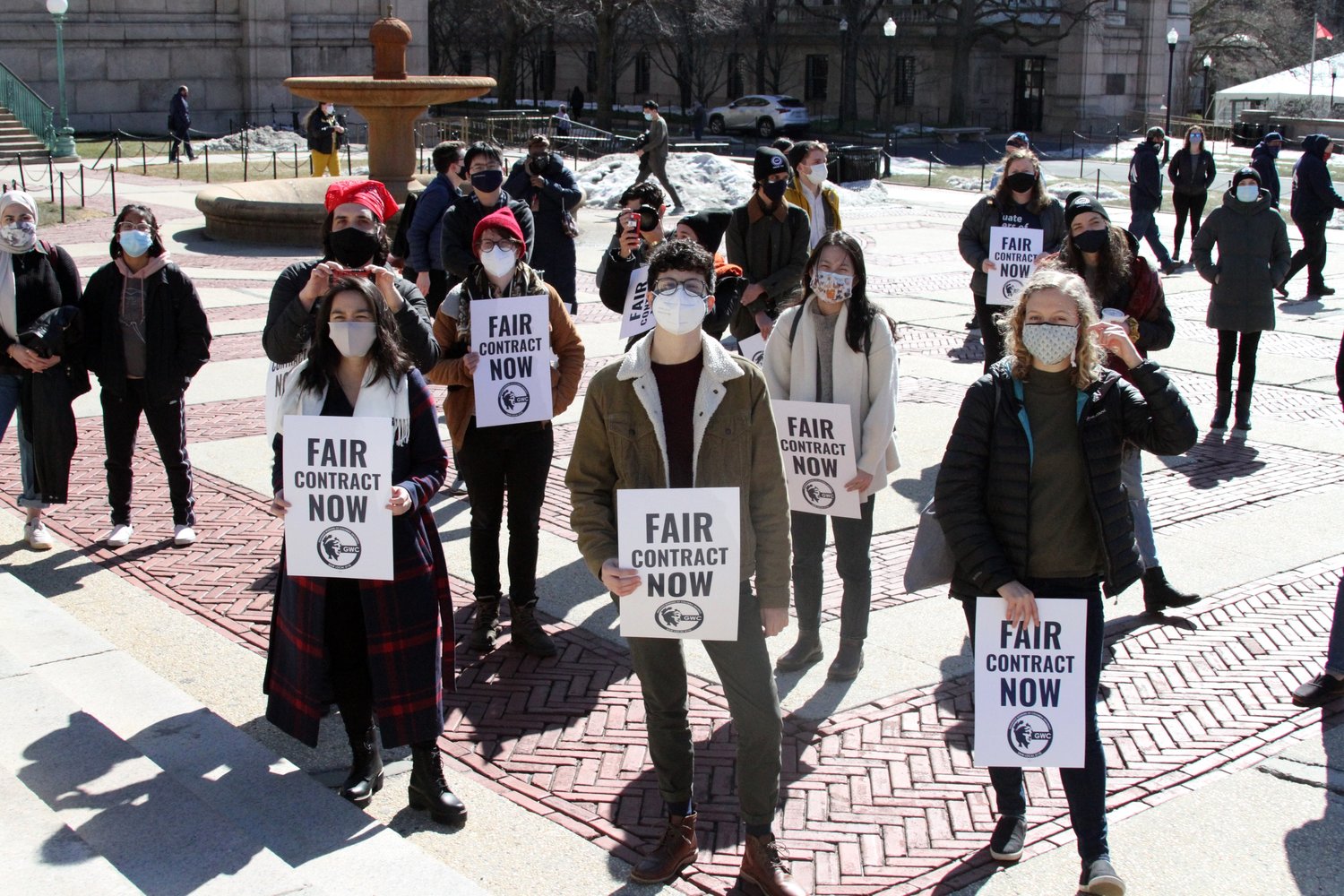 LACK OF AGREEMENT: The Graduate Workers of Columbia, GWC-UAW Local 2110, which two years ago began negotiations with University officials on an initial contract for graduate Teaching Assistants, Research Assistants and Research Assistants, held a rally Feb. 25 on the Morningside Heights campus when they set a March 15 strike deadline for agreement on a contract.

Upward of 3,000 Columbia graduate-student workers are poised to stop grading papers, shelve teaching assignments and suspend research on March 15 if their bargaining unit and university administrators have not reached a contract agreement.

The strike threat comes two years after the university agreed to negotiate and more than four years after the grad workers voted to unionize. The union, the Graduate Workers of Columbia, GWC-UAW Local 2110, is seeking an initial agreement with the university. Among the proposals the students have brought to the bargaining table are additional compensation, appointment guarantees and job protections, fee and tuition waivers and health benefits.

The two sides have held more than 60 bargaining sessions since early 2019.

“Two years is too long to be at the bargaining table and not get a fair offer from Columbia,” the local’s president, Maida Rosenstein, said during a Feb. 25 rally on the Morningside Heights campus during which the students issued their ultimatum.

She recalled that the students had been waging an organizing effort for about 20 years. “It is time for Columbia to recognize this union and offer a fair contract,” Ms. Rosenstein said.

She and others at the rally, as the grad-student workers had for years, denounced university officials for initially undermining the organizing effort and then failing to negotiate in good faith.

The unionization effort at Columbia goes back at least two decades, but was hampered for several years by a National Labor Relations Board decision that grad workers at private universities were not entitled to collective-bargaining rights.

Columbia, like at research universities throughout the country, both public and private, depend heavily on graduate-student workers to teach, grade papers and conduct research. The bargaining unit includes Teaching Assistants, Graduate Research Assistants and departmental Research Assistants. Union members authorized a strike a year ago, voting 1,833 to 77 to allow the bargaining committee to make that call.

“Columbia University doesn’t want to recognize the hard work we put in teaching classes, grading schoolwork and doing groundbreaking research,” Steven Lazickas, a master’s student in the School of International and Public Affairs, said at the rally.

Citing what he called university officials’ intransigence, he said the graduate workers’ action represented a rejection of Columbia’s “anti-worker and anti-union positions,” and added that the university had so far failed to take the grad workers seriously.

“And if they don’t give us the contract we deserve by March 15, we’ll show them just how serious we are," he said.

A university spokesperson called the strike threat "counterproductive and disappointing" given draft agreements and other factors.

"Last summer, we concluded a labor agreement with our postdoctoral researchers and associate research scientists and scholars, a contract saluted by both parties. Now we are on track to replicate that accomplishment in the current negotiations with the GWC-UAW. We have reached draft agreements on many important issues and are making progress on those that are outstanding," the spokesperson said in a statement.

University officials continued to maintain that the grad students were not entitled to collective bargaining until finally agreeing to begin negotiations just over two years ago. But the graduate workers say that university administrators, working with the city-based international law firm Proskauer Rose, known as a management-negotiating firm, have engaged in untold delaying tactics since then.

Addressing the Feb. 25 rally, she chastised university officials for their recalcitrant bargaining stance.

The university and the students' 10-member bargaining team have at least two bargaining sessions scheduled before the March 15 deadline. The committee said it had told university officials that it would like to meet more frequently and sought a commitment to negotiate for full days.