In Charm City, putting the squeeze on squeegee workers 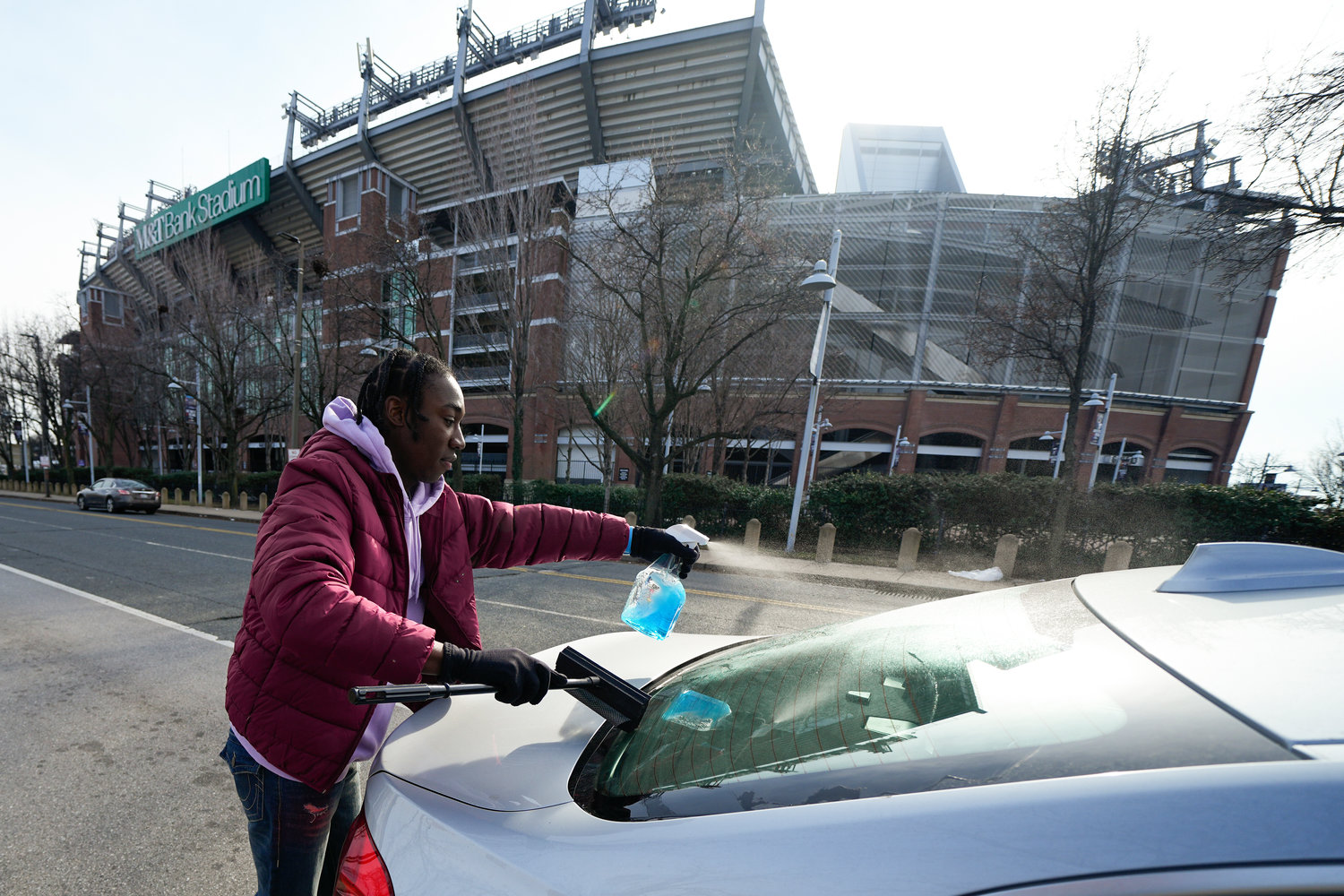 Shamonte Jones cleaned the back windshield of a vehicle stopped at a red light near M&T Bank Stadium in Baltimore onTuesday. Local officials are rolling out their latest plan to steer squeegee workers away from busy downtown intersections and toward formal employment using law enforcement action and outreach efforts.
Julio Cortez/AP Photo
Posted Wednesday, January 11, 2023 11:43 am
BY LEA SKENE

Tyemaur Scott started 2023 with an important New Year's resolution. He vowed to leave the ranks of Baltimore's squeegee workers, whose intractable presence at busy downtown intersections remains a source of heated public debate.

A deadly confrontation last summer — when a teen windshield washer shot an irate, baseball bat-wielding driver near the Inner Harbor during evening rush hour — galvanized disparate opinions about the practice. And on Tuesday, police launched a new program that allows officers to issue panhandling citations in six zones where squeegee work is most common. The planned enforcement marks a major turning point in the city's approach.

To some city residents and officials, the young men washing windshields for cash are hard-working entrepreneurs trying to survive under difficult circumstances. They represent a host of systemic problems facing black Baltimoreans, including deep-seated poverty, racism and disinvestment in communities of color. But other downtown drivers consider them a nuisance and public safety hazard.

While city leaders pledged to finally address the root causes, members of the public expressed skepticism about whether this latest effort will provide anything more than a Band-Aid solution.

In November, a collaborative of local officials, squeegee workers and other stakeholders presented a plan to combine limited law enforcement action with robust outreach efforts aimed at connecting economically disadvantaged youths with long-term jobs and resources, including mentors and housing support.

But some workers said they were already rethinking squeegeeing after experiencing increased stigma and decreased profits in recent months. For those reasons, along with his mother's longtime disapproval and his own ambitions, Scott said he decided to turn a new leaf.

"It's like I was standing still when I could've been accomplishing so much more," he said.

Scott, 22, said he started squeegeeing about five years ago because he needed money to help support himself. He estimated his recent daily earnings fluctuate between $40 and $200.

Scott attended a career readiness fair hosted by the Baltimore mayor's office last week. He hopes to earn his GED and become a firefighter someday.

Many squeegee workers grow up in poor, majority-black communities. Squeegeeing allows them to earn money while avoiding the drugs or gang violence plaguing many Baltimore neighborhoods.

Scott said squeegeeing also gave him a unique brand of customer service. His number one rule: When in doubt, just walk away — because "two wrongs don't make a right."

With an infectious smile and unassuming demeanor, Scott bemoaned the small group of "knuckleheads" who give Baltimore squeegee workers a bad name.

But Scott was skeptical about the new enforcement plan. But ideally, he said, the threat of criminal citations would motivate his peers to seek other opportunities. City officials didn't respond to questions about whether they plan to add more enforcement zones in the future.

On Tuesday, outreach workers were present at some downtown intersections, but they said most windshield washers were already informed about the changes. Officials also posted signs warning people against entering the roadway at high-traffic intersections.

"We're being proactive," said Andrey Bundley, director of the Baltimore Mayor's Office of African American Male Engagement. "The goal is to never get to issuing citations."

Jason Bass, director of culture and impact at the Revival Hotel in Baltimore, which currently employs three former squeegee workers, said he hopes that number grows.

"These kids know how to work through hard times," he said.

Can we avoid a recession? As inflation eases, optimism rises

In Charm City, putting the squeeze on squeegee workers