Labor Around the Nation 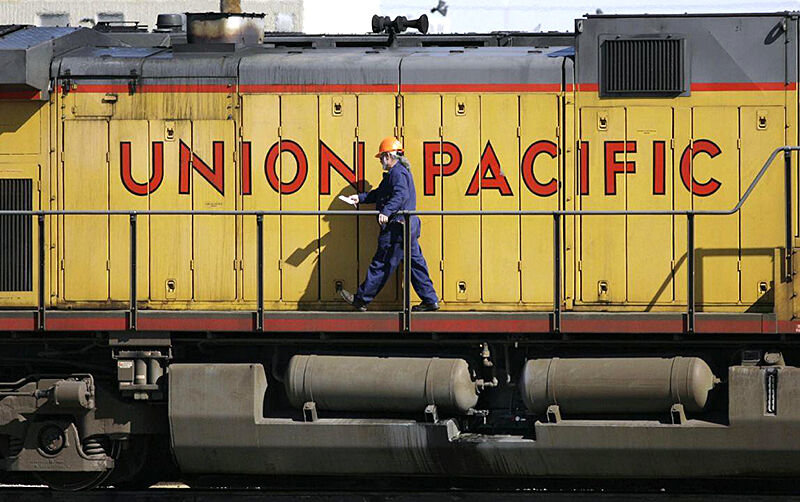 STALLED: Labor unions and rail carriers, including Union Pacific, appear likely to agree to mediation following the breakdown of negotiations on new contracts for about 100,000 railroad workers. Above, a Union Pacific employee on board a locomotive in a north Denver rail yard.

Mediation Next Stop For Rail Carriers and Unions

Contract talks between a group of labor unions that represents about 100,000 railroad workers and several rail carriers have reached an impasse after more than two years of discussions.

The unions, which represent workers employed by Union Pacific Corp. and Berkshire Hathaway Inc.’s BNSF Railway Co., have asked that a Federal mediator step in after “discussions completely stalled last week,” according to Bloomberg. The unions were negotiating for pay hikes of 40 percent over six years.

“The carriers continue to push proposals that fail to even catch up to the cost of living,” the unions said in a statement.

The National Railway Labor Conference, which represents member railroads, said it would “welcome" mediation to reach "fair and reasonable national collective bargaining agreements” with the 10 unions that make up the bargaining coalition.

According to "Trains: The Magazine of Railroading," rail industry negotiations are subject to the Railway Labor Act, enacted nearly a century ago to minimize disruptions to rail transportation. The RLA allows for strikes after unions have exhausted certain negotiation and mediation procedures, but only in response to major disputes.

Tens of thousands of farmworkers in New York State are a step closer to earning overtime following a Jan. 28 vote by the Farm Labor Wage Board.

The board’s recommendation that the farmworkers should receive OT pay after working 40 hours a in a week goes to Gov. Hochul and New York State Labor Commissioner Roberta Reardon. If they sign off, the overtime provision would be phased in over the next 10 years, starting Jan. 1, 2024.

Historically, farmworkers have been excluded from Federal and state labor guarantees like time-and-a-half pay for overtime. Governor Cuomo in 2019 signed into law the Farmworker Fair Labor Practices Act, guaranteeing farmworkers the right to collectively bargain, and access to disability benefits, paid family leave, days off and unemployment benefits.

However, the landmark measure provided for overtime only after 60 hours of labor in a week.

“The workers on whom we depend for the food on our tables have waited over 80 years for dignity and to be afforded the same basic workplace protections as all other New Yorkers,” wrote Donna Lieberman, executive director of the New York Civil Liberties Union.

The childcare services workforce has been slow to recover since the start of the pandemic, with the industry losing another 8,200 workers between September and December last year, CNN reported.

The industry lost one-third of its workers in April 2020, dropping to a low of 673,000 workers, according to data from the Bureau of Labor Statistics. And while the number of day-care employees has improved, standing at 935,000, that number represents 111,400 fewer workers than were on the rolls in February 2020.

Experts say the childcare staffing shortages could hurt the rest of the labor market, particularly as working parents—typically mothers—have to try to find last-minute care as schools shift to remote classes or daycare centers close because of the coronavirus.

"We're nearly two years in, and I think the longer this goes on, it becomes more than just a temporary exit or a temporary break from the labor force," Sarah House, a Wells Fargo senior economist, told CNN.

A recent report by the Economic Policy Institute that measured the rate of what it called “high union density” in U.S. states found a correlation between unionization and economic, personal and democratic well-being.

The report by the Washington, D.C.-based non-partisan think tank also found that workers in those high-union-density states have median annual incomes that are $6,000 higher than the national average.

States with the highest union densities also have a smaller uninsured population and are more likely to have greater sick-leave, paid-family and medical-leave benefits than states with lower union membership.

“In the same way unions give workers a voice at work, with a direct impact on wages and working conditions, the data suggest that unions also give workers a voice in shaping their communities,” the EPI said in a note accompanying the report. Citing academic research, the report found that weakening unions via “right-to-work” laws reduces voter turnout, decreases the number of working-class officeholders and brings about more conservative policies.

Although the average American worker earned a 4.5 percent raise last year, because of a surge in inflation they actually experienced a 2.4 percent pay cut.

"Employers are pulling out all the stops to attract workers," Newsweek quoted Julia Pollak, a chief economist at online employment marketplace ZipRecruiter, as saying. "Historically, we've seen 2.4 unemployed people per job opening at any one time on average, but now it is 0.6 unemployed people per opening. Businesses are fighting a war for talent."

But because consumer prices for goods and services such as food and gas rose 7 percent, the average employee still lost money, the publication noted.

Just one industry, leisure and hospitality, saw wage bumps that were higher than the rate of inflation, receiving an average 14 percent increase to $19.57 an hour in 2021. That’s because the hospitality industry faced struggles finding and retaining staff amid the ongoing pandemic.

Lower-wage workers experienced the biggest pay increases. The retail sector, which was among the lowest-paid industries, saw gains of just under 7 percent. The average hourly wage reached a record high of $31.31 in 2021, according to data from the Bureau of Labor Statistics.

About 45,000 Federal civil servants who work for the Social Security Administration will be heading back to their offices March 30 as part of a negotiated agreement between the agency and the American Federation of Government Employees.

The SSA in November rolled out a plan to have its workforce return by Jan. 3, but as the Omicron variant spiked, the agency conceded their plans had not been properly negotiated with its unions and entered into talks with AFGE.

As part of the union and management reset reflected in the memorandum of understanding, local managers must inform employees when they can sign up for telework. Specifically, employees in eligible positions will be able to telework if they have completed training, use approved technology, abide by the program agreement, are not excluded from participation by law, and if there is sufficient portable work.

For the duration of the MOU, “employees with children whose schools are closed for in-person learning due to COVID are normally approved for temporary telework,” according to AFGE.

SSA civil service titles pay between $44,000 for a customer service representative and $110,000 for a computer program analyst. The average salary is close to $85,000.

Burning up: UPS workers rally to get AC in trucks