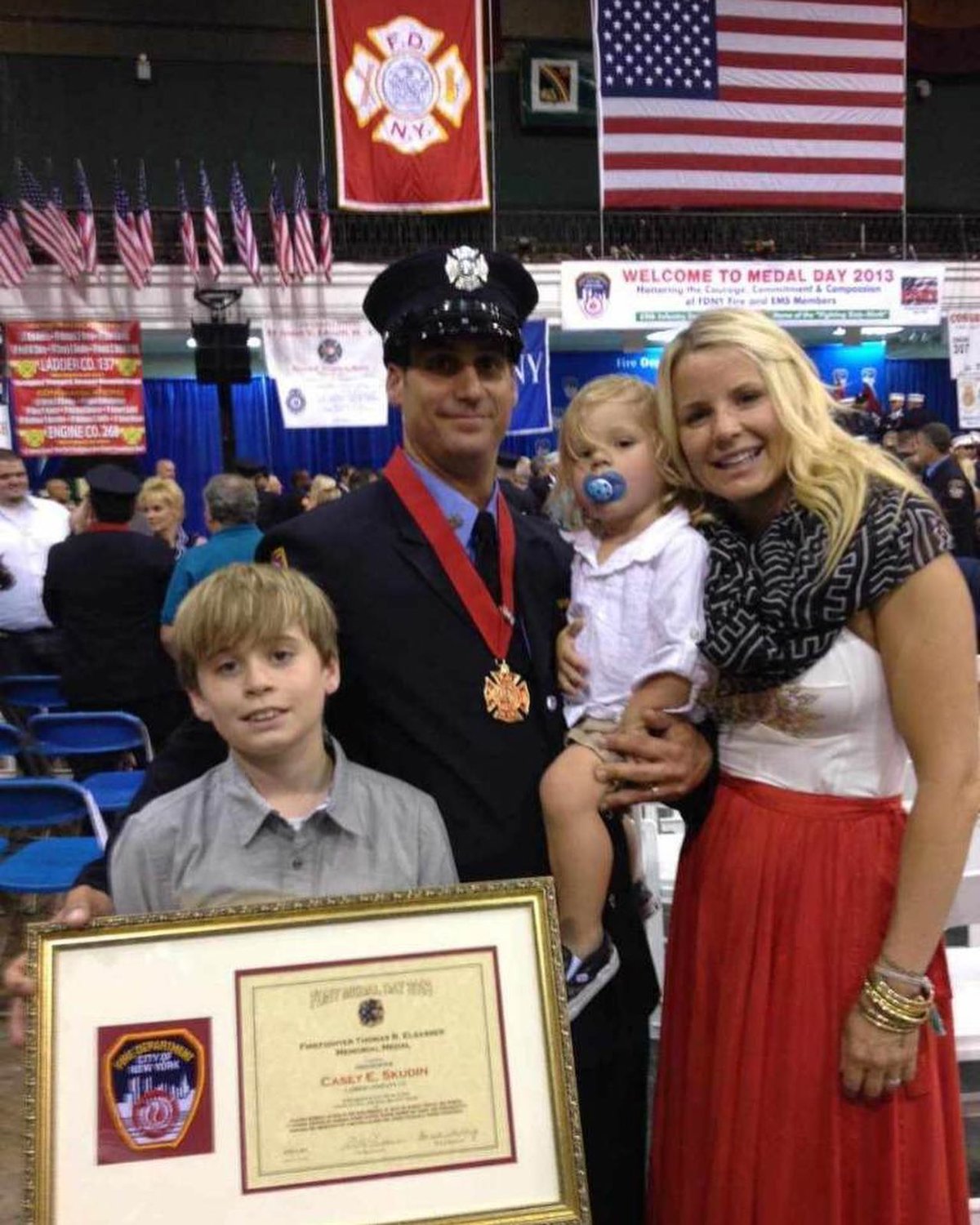 Decorated FDNY firefighter Casey Sudkin, 45, died last week when a tree limb crashed into his car during a windstorm as he and his family were driving on the Biltmore Estate in Asheville, North Carolina. The Ladder Company 137 firefighter is pictured with his family after being awarded the FDNY’s Thomas R. Elsasser Memorial Medal.
Courtesy of the Uniformed Firefighters Association
Posted Monday, June 20, 2022 9:23 pm
BY CLARISSA A. LEÓN

Ladder Company 137 in Rockaway Park is mourning the loss of one of their own after decorated FDNY firefighter Casey Skudin, 45, was killed Friday in Asheville, North Carolina, when a tree limb fell on the S.U.V. he was driving, officials said.

Skudin was vacationing in Asheville with his wife and two children to celebrate Father’s Day and what would have been his 46th birthday on June 19th.

“His loss to his firehouse ‘The Beach House’ in Rockaway will be felt forever,” the Uniformed Firefighters Association said in a statement of the 16-year veteran. “He will be dearly missed.”

The Skudins were driving on the entrance road of the popular Biltmore Estate tourist attraction when a tree limb snapped during a windstorm and slammed onto the Skudins’ car, pinning him in the wreckage.

“I kissed him and just told him the truth that he was the best husband and best father and that it was OK for him to let go," Skudin’s wife, Angela Skudin, told Asheville TV station WYFF. "And I slid his wedding ring off his finger and put it on mine."

She and their older child escaped the vehicle without injuries. Their younger child was hospitalized with a partially collapsed lung and spinal fractures, the TV station reported.

In an Instagram post, Angela Skudin said her husband “had the instinct to turn away from the tree and to position the car for the impact. His quick action as a highly skilled driver saved us and he took the hit.”

Skudin was valedictorian of his probationary firefighter class, graduating in April 2006.

“Today we accept the responsibility and challenge that comes with being a New York City firefighter,” he said at graduation. “I knew this job will never make me rich, but the honor and pride that comes with the profession is priceless.”

In November 2009, Skudin risked his life to try and save Alessandro Barreto, who had become entangled in his surfboard in the Rockaways’ choppy waters. Untethered, and with help from his firefighter colleague, Evan Davis, Skudin swam to Barreto and pulled him to shore. Barreto, though, later succumbed to his injuries.

Skudin was awarded the Fire Chiefs Association Memorial Medal, with the FDNY noting that “Employing his lifeguard skills, the Firefighter gave the victim his only chance to survive.”

In 2013, he was among the Ladder 137 firefighters awarded the FDNY’s Thomas R. Elsasser Memorial Medal for their efforts during and following Hurricane Sandy, including for fighting several fires the night of the storm and rescuing dozens of people, despite being pummeled by debris and losing much of their equipment.

Skudin was an avid triathlon athlete and surfer. His family owned Skudin Surf, a surfer camp business, in Long Beach and the Rockaways. To honor Skudin, they have created a memorial outside the Skudin Surf Club in Long Beach for friends to share their memories of the firefighter.

“No words can ease the loss we bear; You went to heaven too soon in this tragic unthinkable accident, leaving behind tears and pain for so many. Your family, FDNY brothers and sisters, Town of Hempstead Lifeguards, Your CrossFit people, and many friends from all over Long Island loved you,” they wrote in a Facebook post.

“He was a great guy, great fireman, loved his family, loved his job, loved his firehouse,” Skudin’s firefighter colleague Joseph Durkin told News12. “He was a guy you could count on. He'd do anything for you, probably give you the shirt off his back, if he could.”

Governor signs off on mayoral control of schools

For some, the office is a faraway place