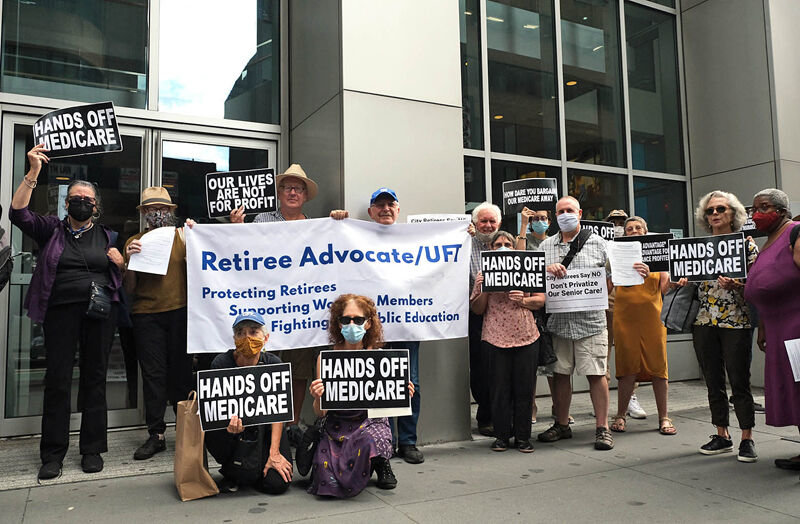 HEARING IT FROM ALL SIDES: A small contingent of retirees gathered outside United Federation of Teachers headquarters to protest the agreement city unions reached in July to shift retirees from Medicare to the new NYC Medicare Advantage Plus program run by a private insurer, unconvinced by city and union assurances that coverage will improve.. A few days earlier, Aetna, which was the losing bidder for the contract that takes effect Jan. 1, filed a lawsuit claiming that the consortium that was selected got the multi-billion-dollar, five-year contract under false pretenses.

The health-care provider that was passed over for a Medicare Advantage program the city is shifting 250,000 retired employees to as of Jan. 1 has filed suit in State Supreme Court in Manhattan, claiming the winning bidder did not meet the selection criteria and that the award process was changed to its detriment.

Attorneys for Aetna Life Insurance in a 30-page legal brief said the five-year contract, which the complaint noted could be extended to 11 years and generate $34 billion in claims revenue, went instead to two longtime city health-benefit providers, Emblem Health and Empire Blue Cross, under the heading of The Alliance but they were actually leaving it to a third party, Anthem Insurance Cos. Inc., to run the program.

Besides claiming that Anthem did not have the experience required under the city's request for proposals to qualify to run the program, the lawsuit stated that the Indiana-headquartered firm did not meet the criteria cited by union officials. It noted that the justification for giving the contract to the Alliance was that the Municipal Labor Committee said retirees preferred The Alliance because they were familiar with its services from past dealings.

City Labor Commissioner Renee Campion referred questions about the suit's charges to the Law Department, whose chief spokesman, Nicholas Paolucci, said in an email that while he had not seen the complaint, "The City is committed to selecting providers that are in the best interest of the City and its retirees. We'll review the case."

The shift of retiree health coverage to Medicare Advantage has been a fraught issue since early this year, with some retirees wary because of flaws and inferior coverage under Medicare Advantage plans in some other states that made the transition. Both city officials and leaders of the MLC, which bargains for city unions on health-care issues, had stressed while the competing bids were being considered that whichever vendor was chosen would offer coverage that was better than what had been provided under Medicare to this point.

Some retiree groups have continued to protest the move to Medicare Advantage after the contract was awarded, with dozens of retirees holding a Sept. 22 rally outside the headquarters of the United Federation of Teachers, whose president, Michael Mulgrew, was a key player in the negotiations over the switch.

In its court brief, Aetna, besides challenging the qualifications of Anthem while claiming it will be the firm managing the program, also argued that its proposal was the superior one from the standpoint of retirees.

It charged that the Office of Labor Relations "has selected an inexperienced and unqualified bidder through a procurement process that violated New York Procurement law, lacked transparency, and violated principles of public trust and fairness...The Alliance failed to meet any of the City's minimum requirements of the Solicitation and, much worse, misrepresented to the City that it met the minimum requirement that a bidder have a current Medicare Advantage customer with 50,000 Medicare Advantage members and supplied grossly inaccurate enrolled member counts."

The court filing noted that all four city representatives who voted on the award preferred Aetna's proposal, with the four union representatives opting for The Alliance, leading the two sides to call in Martin F. Scheinman, an arbitrator who over the years has been responsible for settling disputes involving whether changes agreed to by the MLC had produced the savings that had been expected.

In this case, however, according to the complaint, OLR stated that Mr. Scheinman was acting not as an arbitrator but as a consultant—something city officials said was not unusual in this type of situation—and he indicated a preference for the proposal by The Alliance based on retirees' "familiarity" with EmblemHealth.

MLC Chairman Harry Nespoli, noting that he was not on the panel that voted on the insurance provider, said in a Sept. 22 phone interview, "I really didn't know that the city was totally [voting] to go with Aetna."

Regarding the claims of impropriety made in the court brief, he shrugged them off, saying, "Aetna has good lawyers. But there were no shenanigans there. This was done on the up-and-up."

Asked about the claim in the lawsuit that Anthem would actually be running the program, Mr. Nespoli, who is also president of the Uniformed Sanitationmen's Association, said, "As far as who's really managing, I don't know. All I know is that the people responsible for running this program are the Alliance and Emblem."

Aetna, besides objecting to Mr. Scheinman's involvement in the decision-making process, stated that "the Alliance has misdescribed its membership, insisting it was not "a joint venture between 'EmblemHealth and Empire BlueCross BlueShield.' "

It contended that the Alliance said it had met the bidding requirement that a vendor have a current Medicare Advantage plan with at least 50,000 members by citing the Colorado Public Employees Retirement Association. In fact, Aetna stated, it was Anthem rather than the Alliance or EmblemHealth that had that program, "Colorado PERA never had anywhere close to 50,000 Medicare Advantage members," and that retiree group was switching carriers as of Jan. 1.

In contrast, the court brief continued, Aetna had experience running Medicare Advantage plans for both employers and unions with large memberships, including five with memberships of between 73,000 and 197,000, led by the State of New Jersey and the United Auto Workers Retiree Medical Benefits Trust.

"Perhaps most importantly," it said, "Aetna made sure that its Medicare Advantage plan was affordable, for both the City and the retirees. Indeed, its prescription drug plan was at least $30 less expensive per month than the Alliance's plan and offered free prescriptions for certain generic medications."

Characterizing Anthem as "the wizard behind the curtain," the brief continued, "The Alliance is using the 'Empire' name to mislead retirees. Make no mistake, Anthem is not the 'Empire' that the City says New Yorkers knowt—it is only masquerading as such."

The deal approved by the MLC in mid-July had several key upgrades over existing Medicare benefits.

One was that retiree costs, which have had no limit, will be capped at $1,470 when the NYC Medicare Advantage Plus plan takes effect Jan. 1. A Durable Medical Equipment benefit for employees that is now capped at $2,500 will no longer have a limit.

Ambulance services, which carry a $25 deductible and a $2,500 annual cap under Medicare, will have no deductibles or caps under NYC Medicare Advantage Plus. While the ambulance rides must be deemed "medically necessary," in cases where that standard isn't met, retirees will be entitled to 24 paid rides annually, up to 30 miles per ride, in other vehicles.

The other added benefits include a hearing-aid allowance of up to $500 a year, and retirees will receive up to $200 in gift cards for completing certain activities.

Puzzled by One Beef

Mr. Nespoli said he was puzzled by Aetna's claim that the Alliance had another unfair advantage because Teamsters Local 237 President Greg Floyd is a board member at EmblemHealth.

Noting that he had previously also served on that insurer's board, Mr. Nespoli said it was an unpaid position, and in any event, "All [Mr. Floyd] had was one vote out of the 125 unions" within the MLC.

There was a benefit in the form of improved patient services in having a labor representative on the board, he said, explaining, "The doctors were looking for the members' gripes. He's only representing the members and bringing up the complaints he hears out in the field."