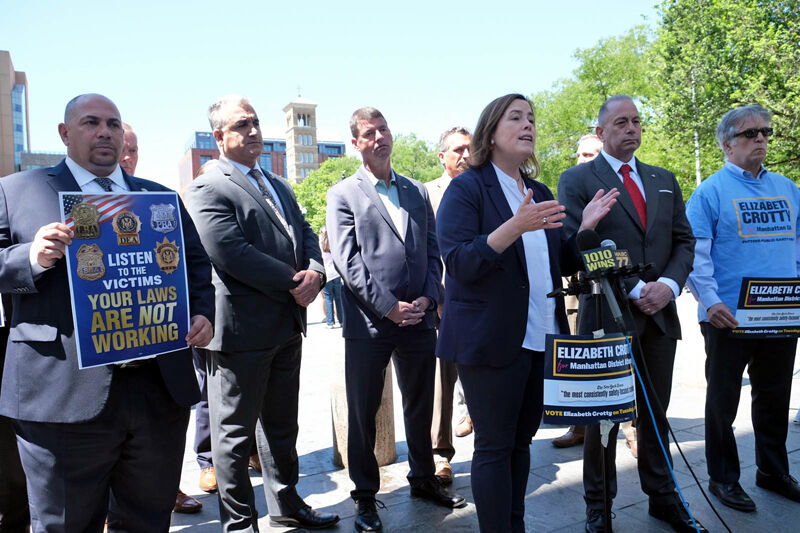 AMPLIFIED MESSAGE: Elizabeth Crotty, a Democratic candidate for Manhattan District Attorney, took her law-and-order message to Washington Square Park June 17, where she called for legislators to dial back bail-reform laws and to give judges increased discretion on how to deal with offenders. She was flanked by leaders and members of the city’s police unions, including, to her left, Paul DiGiacomo, the president of the Detectives' Endowment Association, and, to her right, Christopher Monahan, the president of the Captains Endowment Association.

On a late morning this week, Elizabeth Crotty took her prosecutorial message to Washington Square Park, which has on occasion resembled a dive bar rather than a village green astride a prestigious university.

Flanked by representatives from the city’s police unions June 17, the Democratic candidate for Manhattan District Attorney echoed many of their complaints about a loose criminal-justice system which has allowed repeat offenders to run amok.

And nowhere has this been more evident, she and the union leaders said, than in the 10-acre Greenwich Village park named for the nation’s first President, where, come nightfall, hundreds of younger people have congregated to party in recent weeks.

Neighborhood residents have complained to police that the park-goers don’t just skateboard, play and listen to music, dance and otherwise enjoy evenings, but also carouse and do drugs. And they do so loudly enough to be more than mere nuisances.

Many have called for city authorities to allow police to enforce a 10 p.m. curfew.

“The park is here for families and for children and for everyone to use,” said Ms. Crotty, a Greenwich Village resident who earlier this month made a clean sweep of police union endorsements when she received the Police Benevolent Association’s backing.

The former Assistant District Attorney—she worked Manhattan blue- and white-collar cases during the late Robert M. Morgenthau’s tenure—added that the park has “a storied history,” where artists and performers had plied their trades for decades. It’s also been the locus of protests and demonstrations, she said, but did not note that through the years many devolved into confrontations with riot-gear-clad officers, including last year, when several Pride participants had their dials embellished by pepper spray during a fray there.

Ms. Crotty, now a defense attorney, segued to the topic of bail laws, which she said were too liberal. She intimated they should be tightened with regard to quality-of-life offenses, such as those involving drug use, lewdness, noise and fireworks. Asked to clarify, she said, “It’s not about keeping them in jail, it’s about keeping them responsible. People are not being held responsible. So we have to highlight this problem. We have to put force behind the police to actually do their job.”

She also called on state legislators to give judges increased discretion on when to involve outside agencies, such as those involved in mental health, in the care and custody of an offender.

“And, if appropriate, jail should not be off the table,” she said, as a few members of the grass-roots group Vocal-NY tried to shout her down, including by tossing crude epithets about police.

“I’m just as much a candidate today as I am a constituent,” Ms. Crotty said under the arch at the park’s northern end, where Fifth Ave. begins its trek uptown.

She said she takes daily morning walks with her dog through the park and witnesses habitual drug-dealing. She then sounded a more-ominous note: “There are soon to be violent crimes.” She did not elaborate, but called for empowering police to do their jobs.

Like the police unions, she blamed Mayor de Blasio for any failures ascribed to law-enforcement. “He’s not helping the police do their job,” Ms. Crotty said, which, she intimated, has resulted in “under-policing.”

“The police sometimes are frustrated by the process and are not making arrests because they’re frustrated, because they feel like ‘Why should I make an arrest if nobody is doing anything anyway?’ ” she said. “There is no deterrence right now, and we’re seeing that play out now in quality-of-life crimes and in bigger crimes, and in the gun-violence epidemic that is also going on. It is all hand in hand.”

Paul DiGiacomo, the president of the Detectives’ Endowment Association, underscored her points.

“We’re here because the fabric of New York City is falling apart,” he said. “We made all the arrests, but no one was prosecuting.”

Liberalized bail laws, he said, are permitting miscreants, as well as violent criminals, to go through “a revolving door” that has them back on the streets sometimes in a matter of hours. City and state legislators have tacked too far left, he said. Ms. Crotty, he said, would correct that course.

'Need Someone With Backbone'

People should not be “in fear” of walking through the park, he said. The DEA leader called for city and state legislators to dial back prohibitions on officers’ use of certain maneuvers, such as those that constrict a person’s diaphragm, when they are making an arrest.

“Cops are hesitant because of that law and that needs to be fixed. Politicians messed this up, not the police,” he said. “Politicians, the Mayor’s office and the Governor’s office, they tell us what to do. We just follow the orders. So, if you have questions regarding the way we police, ask them.”

Ms. Crotty, the daughter of a Senior U.S. District Judge who also served in high-profile city posts under Ed Koch and Rudy Giuliani, also blamed court closures for excess crime and low enforcement, a charge that court officials have steadfastly pushed back against.

“This is my home, and home is a place where everyone gets to feel safe,” she said. “And people are not feeling safe in New York.”

A dozen or so supporters loudly cheered her remarks during the 30-minute event.

A few minutes later, Ms. Crotty, addressing a question about the Mayor’s role in how the park was being used and abused, answered that he had made light of the issue. She was soon drowned out by thumping electric bass lines and the vocal: “We don’t need more police.”

Amplified sound in the park, she noted, was illegal. She nonetheless called an end to the event.