Many City Neighborhoods Still Lag Far Behind on Vaccination Rates 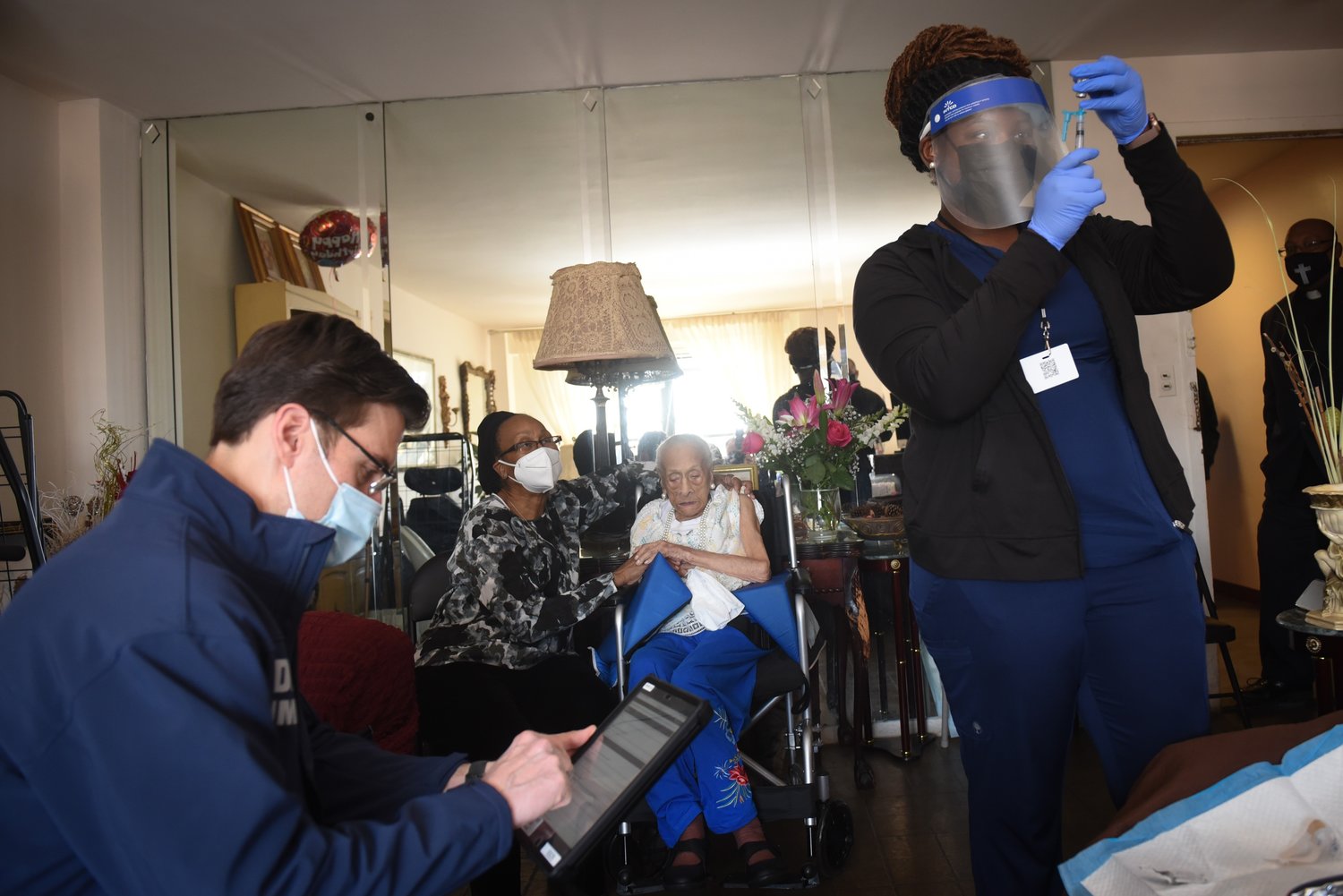 TRYING TO REACH THE MOST-VULNERABLE: City officials are being assisted by community organizations in vaccinating people who are most susceptible to the coronavirus, with a wide disparity in inoculation rates that often falls along economic lines, with those living in the Wall Street area reportedly 100 percent vaccinated while those in one ZIP code in Rockaway, Queens at just 32 percent. Above, Sarah Butler, 108, received the Johnson & Johnson vaccine from the FDNY's homebound vaccination program at her Harlem home in Harlem on April 6.

Despite government campaigns to induce New Yorkers to get their coronavirus vaccination, vaccination rates in some city ZIP codes lag far behind others, even as public-health officials warn that the Delta variant is on the rise, putting the unvaccinated at much higher risk of an infection.

Nationally and regionally the rate of new vaccinations has dropped, with both Mayor de Blasio and President Biden failed to achieve their goals.

During his July 13 press briefing, the Mayor said the city was addressing the vaccine disparity "by sending more of our mobile efforts into those communities, working with community leaders."

"A lot of this has to be done very locally," he said. "That's why we have this bonus referral initiative where local committee-based organizations, houses of worship, and others can actually directly benefit financially for their community for every single person that they bring in to get vaccinated."

The low vaccine rates in some neighborhoods are of particularly concern to workers who must provide services and address emergencies.

"As first-responders we respond to everybody—EMS, fire, police, whatever," Dr. David J. Prezant, the Fire Department's Chief Medical Officer, said during a July 13 phone interview. "We don't know whether they [patients] have been vaccinated. We can't just respond to people that are vaccinated."

He added, "And that is why, on both the fire and EMS side, that respiratory protection is mandatory for all patient interactions. So, while the [U.S. Centers for Disease Control and Prevention], New York City and New York State have said that if everybody is vaccinated you don't need to wear a mask, that's not true in a health-care setting. In health-care facilities, the [state Department of Health] said everybody should wear face coverings and health-care personnel should wear proper respiratory protection."

He said that department personnel are mandated to don their N-95 masks and other respiratory protections "for all patient interactions."

Further complicating the picture is that vaccination rates have continued to lag in the ranks of the NYPD as well as  for both Firefighters and Emergency Medical Service workers, putting them at greater risk of contracting the Delta variant.

The FDNY has consistently reported that just half its workforce has gotten the vaccine.

"We are tracking consistent with other health-care settings in the 50 percent range," said Dr. Prezant.

He said the city can't "force people to be vaccinated" but "we hope more and more people will be educated to understand the benefits of vaccination."

Several FDNY members have died from COVID with several thousand having experienced a bout with the virus that's been documented to have long-term health complications.

The NYPD said that as of last month, just 41 percent of its workforce had gotten at least the first round of the vaccine. Fifty-nine police officers and civilian employees died from the virus, which infected more than 10,000.

According to the city Department of Health and Mental Hygiene website, ZIP codes in places like the Wall Street neighborhood have 100-percent vaccination rates, while up in East Harlem, just 49 percent of residents were fully vaccinated. Lagging even further behind is Rockaway in Queens, where just 32 percent of the population is fully vaccinated.

Borough compliance is topped by Manhattan at 65 percent, followed by Queens, 58 percent, Staten Island 49 percent, Brooklyn 46 percent and The Bronx at 43 percent.

Blacks are at 30 percent with Latino New Yorkers at 39 percent, well below the citywide 53 percent full vaccination rate. In contrast, Asians have a 68-percent compliance rate.

At his July 13 press briefing, Mayor de Blasio told reporters the city had administered close to ten million doses of the vaccine but that "especially within agencies" it needed a "redoubling our efforts, because every single additional vaccination matters."

"We understand that there are populations, including first-responders, who continue to, you know, be wary of vaccination," Dr. Mitchell Katz, president and CEO of NYC Health + Hospitals, told reporters. "We're doing our best to provide information, to provide peer support, testimonials of other people, community leaders, religious leaders, all to make people more comfortable with vaccination, and it is working."

Health Commissioner Dr. Dave Chokshi said the success of the vaccination drive "hinges on the one-on-one conversations... where people can share their values and preferences and find a listening ear to talk through any remaining concerns from them. But in that conversation, we have to be very clear that it is a dangerous time to remain unvaccinated, particularly because of the new variants that are circulating."

Across the country, CNN is reporting that in states including Alabama, Mississippi and Arkansas, "the only states to have fully vaccinated fewer than 35% of their residents" average daily case rates "were among the 10 worst" nationwide."

Last month, in the United States, more than 99 percent of the confirmed COVID deaths were among the unvaccinated, according to CDC Director Rochelle Walensky.

During his July 4 NBC Meet the Press appearance, Dr. Anthony Faucci, the country's top infectious disease official, said in areas where COVID cases were rising amid low levels of vaccine compliance, he would wear a mask to "make sure that I get the extra added level of protection."

Here in New York City, as well as New York State, public health officials have followed the CDC's lead and lifted the indoor-masking guidance for those who are vaccinated based on an honor system.

In New York State, where COVID testing is down, as it is nationally, there's been an 85 percent increase in new cases, while hospitalizations and deaths are still down substantially.

At the height of the pandemic, close to 1,000 New Yorkers were succumbing to the virus daily, while recently those numbers have been in the single digits.