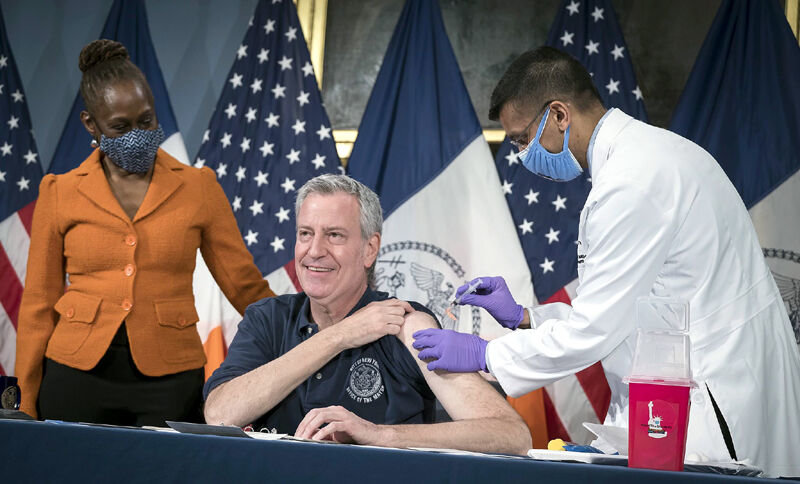 SOME MORE READY FOR THEIR SHOTS THAN OTHERS: While Mayor de Blasio in March had Health Commissioner Dr. Dave Chokshi give him the needle in March, many city workers, particularly in uniformed agencies, have remained reluctant to be vaccinated, causing uneasiness among some union leaders who fear their members are at risk.

Beginning today, July 6, all municipal workers who have gotten their coronavirus vaccinations no longer have to wear a mask on the job or observe the U.S. Centers for Disease Control and Prevention's social-distancing requirements instituted to stop the virus's spread.

Mayor Bill de Blasio told reporters at his June 29 briefing, “Unvaccinated workers...people who are not yet vaccinated, people who interact regularly with the public, will still be wearing masks and still be maintaining distance.”

'Right Time to Do It'

He added, "We want to do this because it's the right time to do it. People are ready...By September, we'd like to see everyone in our offices back to normal."

The loosening of the COVID protections came just weeks after the Mayor conceded his administration would not meet its goal of having five million New Yorkers vaccinated by the end of June. He has been encouraging the 80,000 city employees who have been working remotely to return to their offices, citing the effectiveness of the vaccination program.

Both state and city health officials report dramatic improvements in the key indicators used to track the virus, including declines in hospitalizations, intubations and deaths. But public-health experts continue to cite wide disparities in vaccine compliance between neighborhoods as problematic.

Concerns also continue to grow about the spread of the Delta Variant, which was first flagged in India and is considered more contagious than the original virus. CNN reported that the COVID vaccines have been found to be effective against the variants, but globally “the spread of coronavirus is outpacing vaccinations,” according to the World Health Organization.

Mr. de Blasio’s announcement got a range of responses from unions that represent a municipal workforce that has lost almost 400 members to the virus, which has killed more than 600,000 Americans.

“These seem like sensible next steps as we continue to reopen New York City,” wrote Freddi Goldstein, communications director for DC 37, which represents more than 125,000 workers. “Of course, the devil is in the details, and we will be watching to see how the city ensures the safety of our members.”

She said more than half the union’s members have been vaccinated.

But Eddie Rodriguez, president of  DC 37’s Clerical Employees Local 1549, whose members handle 911 calls, 311 complaints, and program intake for social-service agencies and the city hospital system, said in a statement, "We remain very concerned about the protocols put in place by the City of New York and the CDC. Our members work with some of the most vulnerable populations with the widest vaccination gaps, and [at] worksites where social distancing and mask-wearing protocols were not prioritized nor adhered to."

He expressed concern that loosening the virus protocols could pose “a health risk for all” because of variants, adding that “NYPD management and uniformed employees at 911 and in the precincts have not adhered to masking and distancing protocols in place previously." despite complaints by Local 1549.

“Too many of our members have already returned part time to offices that were unclean,” Mr. Rodriguez wrote.  “We do not know if the city has adhered to the proper protocols for cleaning and/or replacing old ventilation systems that are safe to be used in offices. These types of announcements with last minute deadlines without any safety measures included in them panic our workforce."

“Happy to hear the numbers are consistently low and vaccinated numbers of New Yorkers are increasing,” wrote Gloria Middleton, president of Communications Workers of America Local 1180, which represents several thousand Administrative Managers and Project Managers. “Labor will still have to sit down with the Mayor’s Office to discuss further safety precautions going forward.”

She continued, “As we do walk-throughs in City Buildings especially the older ones, the air filtration systems still have to be addressed.  There is also the question of how we know who is vaccinated, and who is not."

“It makes really good sense,” Mr. Croghan said during a phone interview. “The most important thing we can do is vaccination. And by rewarding people that have gotten vaccinated with not having to wear the mask,” you are re-inforcing that behavior. “The one concern we will have is that none of us knows to what degree this virus could mutate. If it changes dramatically, all bets are off.”

Mr. Croghan, whose union represents 4,500 staff analysts across city government, estimated that 80 to 85 percent of the staff are vaccinated.

Vincent Variale, president of DC 37’s Local 3621, which represents Emergency Medical Service officers, said during a phone interview that he thought the Mayor was advancing a reasonable policy that balanced public health concerns and the civil rights of public workers.

“I am glad to see the city taking this next step and helping the economy come back—those who have been vaccinated should be free from the mask,” he said. “And I think we should not force people to have to put something like a vaccine in their body that they are not comfortable with. But we do have to protect the health of our co-workers and the public, so those who chose not to be vaccinated should have to wear a mask.”

But Queens City Councilman Daneek Miller said he was "a little concerned" about the Mayor's decision to rely on the honor system among city workers regarding vaccinations. "You also can't ignore the dichotomy here where there are so many communities like the one I represent where we are still nowhere near the 70-percent threshold but more in the 35-to-40-percent range," he said.

In the middle of June, even though first-responders and other essential city workers have had access to the vaccine for several months, compliance continued to lag significantly in several key occupations. According to the NYPD, 41 percent of the department’s workforce had been inoculated, up from 35 percent at the beginning of May.

Less than a third of Department of Correction staffers have gotten their shots, according to WNYC’s Gothamist.

According to the Fire Department, the vaccination rate has stayed at around 50 percent for a couple of months for both firefighters and Emergency Medical Service workers, while 57 percent of the department’s civilian workers—1,206 out of 2, 123—have been vaccinated.

A spokesman for NYC Health+Hospitals said a recent surge has brought the vaccination rate among its members to 57 percent, as well.