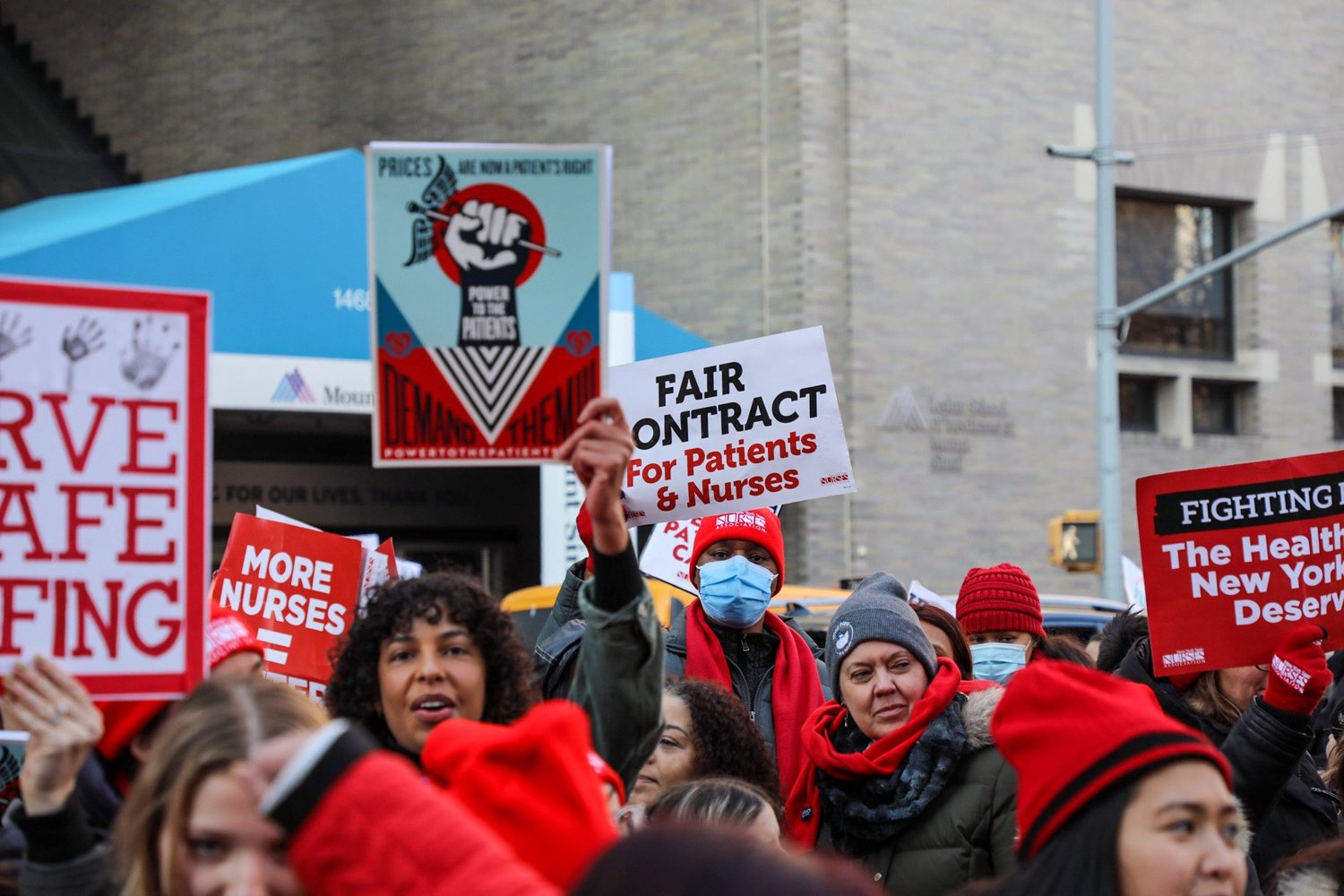 More than 7,000 nurses at two New York City hospitals were in the third day of a strike Wednesday with no breakthrough yet on the nurses’ demands for better pay and increased staffing.

Negotiations between the NYSNA and hospital officials had resumed, but tentative agreements remained out of reach at press time.

As the hospitals rely on temporary travel nurses, those workers have described conditions inside the facilities since the start of the strike as “chaotic,” according to The New York Times.

As hospitals are slammed with a “tripledemic” of Covid, flu and RSV patients, improving care by increasing staffing and enforcing safe-staffing ratios has been the main goal during negotiations, NYSNA officials emphasized. Nurses described staffing shortages in the neonatal unit at Mount Sinai, where nurses often care for two to three NICU babies instead of one, and the frequent use of hallway beds at Montefiore due to overcrowding.

“When you see nurses on the outside, you’d best believe there is something very wrong on the inside. They want to be in the hospital taking care of their patients. The nurses are heartbroken to have to be out here on the street,” Pat Kane, NYSNA’s executive director, said at a Monday afternoon press conference outside of Mount Sinai Hospital on the Upper East Side. “We need a fair contract for our nurses that recognizes the job they have to do and that also recognizes that New York State has been in a state-declared staffing disaster emergency for over a year now.”

There are more than 700 unfilled nursing positions at the three Montefiore hospitals located in the Bronx, while Mount Sinai Hospital has over 500 vacancies, according to the union.

“We are not out here for wages. We are out because we want patient safety,” said Lorena Vivas, a neurosurgical ICU nurse at Mount Sinai who has worked in nursing for 19 years. “When I work in ICU, I’m supposed to only have two patients; I have [had] three-to-four for the past five-to-six years.”

“We are sick and tired of the hospital only doing the bare minimum for us nurses. … We are tired. The hospital doesn’t seem to care,” said Danny Fuentes, who works in the surgical and transplant ICU at Mount Sinai. “Mount Sinai loves to say ‘Find a way.’ Find a way, Mount Sinai.”

A day before nurses walked off the job, Governor Kathy Hochul called for a binding arbitration in order to avoid a strike. “We will continue to work with partners and all parties so that New York City hospitals and nurses can continue to play their critical role in caring for New Yorkers,” she said Sunday.

In response, NYSNA stated that “we welcome the Governor’s support in fighting for fair contracts that protect our patients.” But the union added that Hochul “should listen to frontline COVID nurse heroes and respect our federally-protected labor and collective bargaining rights.”

In preparation for the strike, the Mount Sinai Health System began slashing services. According to a memo from hospital officials, Mount Sinai has started canceling elective surgeries, transferred babies from its neonatal intensive care units and diverted ambulances from its hospitals.

In a statement, a spokesperson for Montefiore Medical Center called the strike’s onset “a sad day for New York City.” The spokesperson noted that the hospital offered a 19.1 percent compounded wage increase and promised to create over 170 new nursing positions.

“The entire New York City labor movement stands with our nurses, who are courageously taking action against dangerous understaffing that threatens the safety of their patients,” said Vincent Alvarez, the president of the New York City Central Labor Council.

State Senator Jessica Ramos, who chairs the Committee on Labor, said that “it should be alarming to all New Yorkers that these contract negotiations have come to this. Rather than raising wages and ensuring hospitals have safe staffing ratios, hospital management has been granting themselves bonuses and pocketing money that could be used to strengthen our public health infrastructure.”

NewYork-Presbyterian was the first to settle a tentative agreement for 4,000 nurses hours before their contract was set to expire Dec. 31. The hospital’s nurses ratified the pact Jan. 7, with 57 percent of nurses voting in favor of the deal. Nurses at Maimonides Medical Center also ratified their contract last week, with 93 percent approving the deal Jan. 6, NYSNA announced.

Nurses at Mount Sinai Morningside and West also averted a strike, reaching a tentative agreement Sunday afternoon. The tentative agreements all follow the pattern set by the deal reached with NewYork-Presbyterian. The agreements include 7 percent, 6 percent and 5 percent raises over three years and improved staffing ratios in several units, including the emergency department.