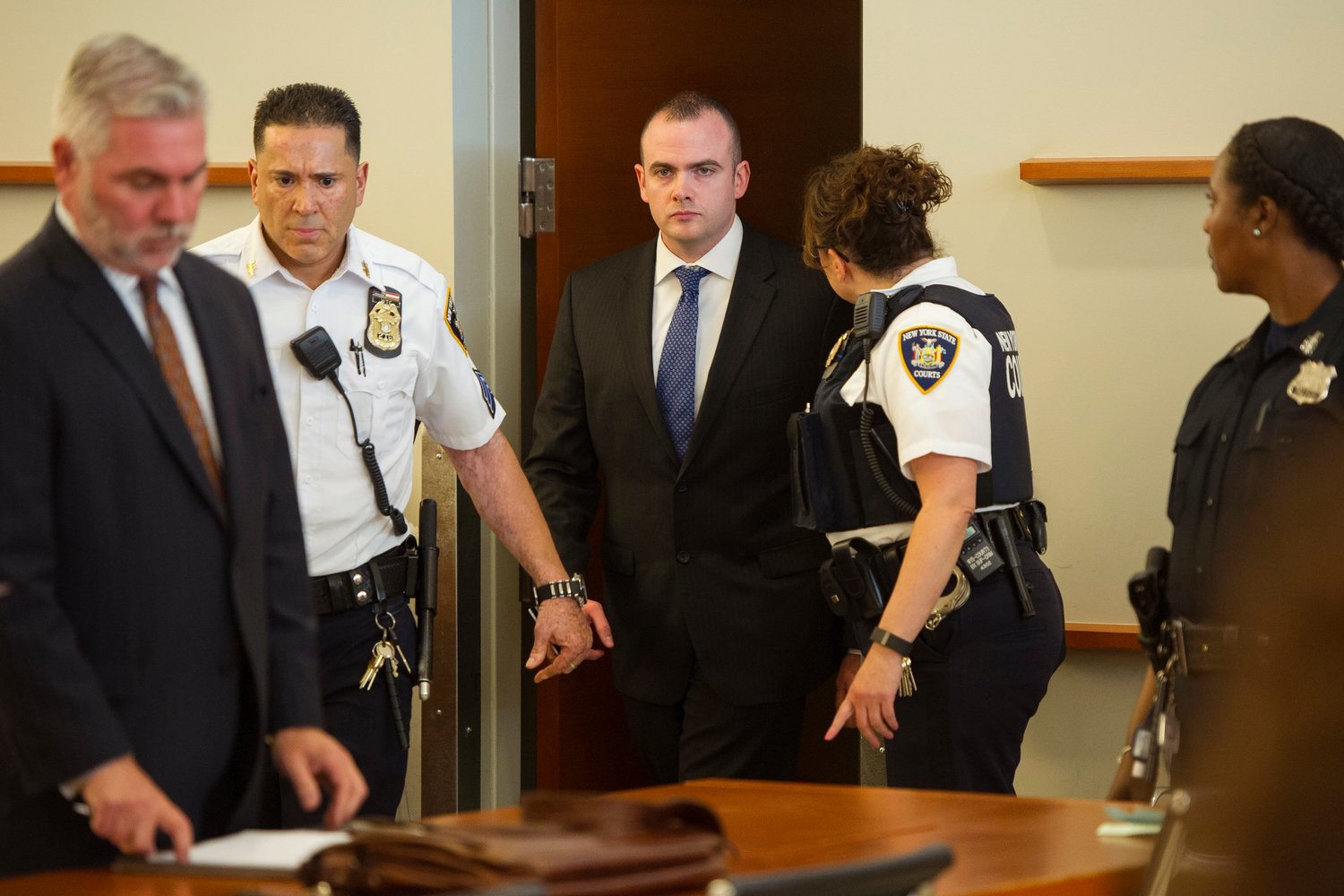 ‘VINDICTIVENESS’: NYPD Sgt. Hugh Barry will face departmental charges 3-½ years after he was acquitted in State Supreme Court of murder and other charges for the shooting death of Deborah Danner in October 2016, an incident that drew widespread condemnation, including from city and police officials. Above, Sergeant Barry being escorted into Bronx Supreme Court for his arraignment May 31, 2017.

More than three-and-a-half years after being acquitted of murder charges for killing a 66-year-old Bronx woman who had come at him with a baseball bat in her apartment, NYPD Sgt. Hugh Barry will face departmental charges.

A police source said that the NYPD’s decision to proceed with an internal trial represented nothing short of spitefulness. The decision to prosecute, on failure to supervise charges, no doubt came from City Hall, the source contended.

“It’s vindictiveness from the Mayor, from the fact that (then-NYPD Commissioner James) O’Neill at the time was embarrassed” by the decision to acquit Sergeant Barry, said the source, who insisted on anonymity to discuss the matter.

“He’s trying to expedite this so he can try to get his pound of flesh because he’s been embarrassed,” the source said of Mr. de Blasio, who will be leaving office at the end of the year.

The source said that the process could reveal more about the matter than the department might intend. “This trial is going to embarrass the Police Department,” the source said. “They just made it personal.”

The internal trial is calendared for eight days this month starting Sept. 20. One of Sergeant Barry's attorneys, however, is in ill health, which could delay proceedings.

Sergeant Barry and other officers came to Ms. Danner’s Bronx apartment Oct. 18, 2016, after neighbors called to say she was creating a disturbance in the hallway.

At trial, the then-10-year cop testified that Ms. Danner, a former information-technology worker, was sitting on her bed when he first approached, but was using scissors to “aggressively” cut paper. She demanded to speak with an Emergency Medical Technician who was present. Sergeant Barry told her that she first had to put down the scissors.

Although Ms. Danner, a paranoid schizophrenic who had been hospitalized numerous times, eventually came out of the bedroom without the scissors, she retreated when the Sergeant tried to grab her. She grabbed a bat; Sergeant Barry drew his gun.

“I just see the bat swinging and that’s when I fired. I’m looking at this bat that can crack me in the head and kill me,” he testify at his trial in early 2018.

Mr. Barry’s actions were widely condemned by Bronx and city officials, including by Mayor de Blasio, who called the shooting “unacceptable,”  and then-NYPD Commissioner O’Neill, who the morning after the incident framed it as a collective tragedy.

"What is clear is, in this one instance, we failed,” he said at the time. “I want to know why it happened.”

Mr. O’Neill also said it appeared that department policies and procedures regarding emotionally disturbed persons were not followed. He placed Sergeant Barry on modified duty, and stripped him of his gun and badge.

That Sergeant Barry is white and Ms. Danner was black inflamed tensions.

Bronx District Attorney Darcel Clark that December asked the court system to empanel a grand jury. Sergeant Barry was eventually indicted on charges of second-degree murder, manslaughter and criminally negligent homicide in May 2017.

The Sergeants Benevolent Association ripped Mr. O’Neill following the indictment, saying he had prejudiced the case against Mr. Barry.

“Commissioner O’Neill’s blanket statements, coupled with equally inflammatory comments by his boss Mayor de Blasio, undoubtedly tainted the grand-jury pool and denied any semblance of due process for Ser­geant Barry by supplanting public opinion and putting a judicial expectation in the minds of the Bronx District Attorney’s Office and the grand jurors,” the union said in a statement.

But after a three-week trial, Bronx Supreme Court Justice Robert A. Neary—Sergeant Barry opted for a judge rather than a jury to decide the case—found the prosecution had failed to prove he was not justified in using deadly force.

Following the verdict, Mr. O'Neill said the NYPD would proceed with "a disciplinary review of the tactical and supervisory decisions" leading up to the shooting, a statement that strongly suggested administrative charges were forthcoming.

"Today's court decision determined that Sgt. Hugh Barry had no criminal culpability," then-Commissioner O’Neill said. “It does not, however, make the loss of Deborah Danner's life any less tragic."