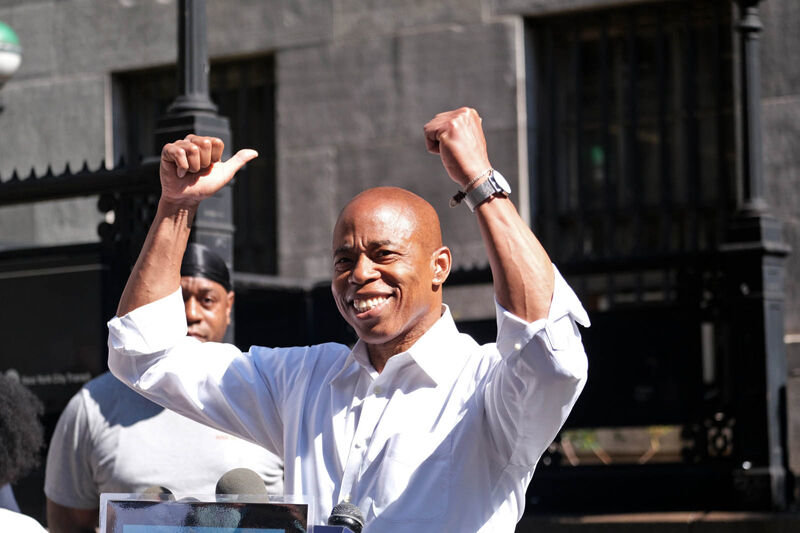 PICKING UP THE PIECES: Three weeks before Eric Adams celebrated his narrow win in the Democratic primary for Mayor June 22, the United Federation of Teachers had instructed its members not to list him on their ballots because of his support for charter schools. The union's Delegate Assembly will vote Oct. 13 on its recommendation that they endorse the Brooklyn Borough President, who is heavily favored to win the Nov. 2 general election.

The Chief-Leader/Michel Friang
Posted Thursday, October 7, 2021 9:31 am
By RICHARD STEIER

Slightly more than four months after the United Federation of Teachers urged its members to leave Eric Adams off their ballots in ranking up to five candidates for the Democratic nomination for Mayor, the union is set to ask its Delegate Assembly Oct. 13 to endorse him for the Nov. 2 general election.

The change in feelings is not unusual, given that Mr. Adams narrowly gained the party's nomination in the June 22 primary, three weeks after the union in its voter guide advised both active and retired members, "DON'T select Eric Adams or Andrew Yang as a choice for mayor."

The transition from its losing choice in the primary is not an unusual one for what most regard as the city's most-powerful union. In 2013, the UFT backed former City Comptroller William C. Thompson Jr. in the primary, shifted to Bill de Blasio after he won the Democratic nomination by enough to avoid a runoff, yet still was able to negotiate a wage contract that was nearly 54 months overdue just four months after the new Mayor took office.

In that case, however, union President Michael Mulgrew explained the endorsement of Mr. Thompson when it was given by saying he had "a clearer path to victory" than other candidates including Mr. de Blasio.

This time around, the union put the Must-to-Avoid tag on Mr. Adams just as the Brooklyn Borough President was emerging as the leader in the polls while Mr. Yang slipped from his status as the early front-runner and the UFT's choice, Scott Stringer, was treading water in the middle of the pack.

The UFT clearly hoped that if enough members left Mr. Adams and Mr. Yang off their ballots because of their support of charter schools—which had been reciprocated by significant funding for their campaigns by hedge-fund operators, one of whom had a particularly edgy relationship with the union—a candidate who either opposed charters or was less-enthusiastic about expanding their number might prevail.

But Mr. Stringer did not rally in the closing weeks of the campaign, and the best showing by someone opposing any expansion of charter schools here and statewide was by Maya Wiley, who finished a close third behind Kathryn Garcia, who supported a limited expansion.

Under the ranked-choice voting system, when Ms. Wiley was eliminated from the contest, her votes were transferred to the two leading candidates, with a large-enough share of those ballots ranking Ms. Garcia above Mr. Adams that his winning margin was trimmed to just 1 percent. But his huge advantages in both Democratic enrolled voters and in available campaign cash against Republican nominee Curtis Sliwa—and Mr. Sliwa's caustic comments over the years about the UFT—virtually guaranteed that Mr. Mulgrew would be recommending that union delegates go from disdaining the favorite to embracing him.

The Brooklyn Borough President during the primary campaign made clear that he supported a charter-school expansion largely because of the dismal record many traditional public schools in poorer city neighborhoods with largely black and Latino populations had done in educating students, while the best charter schools had good results in some of those areas.

During an interview with NY1 political anchor Errol Louis that was broadcast Oct. 5 on "Inside City Hall," Mr. Adams moderated the comparison a bit. He repeated an oft-used line during the primary, saying that 65 percent of "black and brown students" were not meeting the proficiency standard in "regular schools." This time, he added, "but neither are 40 percent in charter schools."

In remarks that were an implicit indictment of the school system under Mr. de Blasio, the Democratic nominee told Mr. Louis, "We know that our school system right now is broken. Let's be honest: if other ethnic groups were being treated in this way that black and brown students are being treated, they would tear that school system down. We have accepted this inferior product."