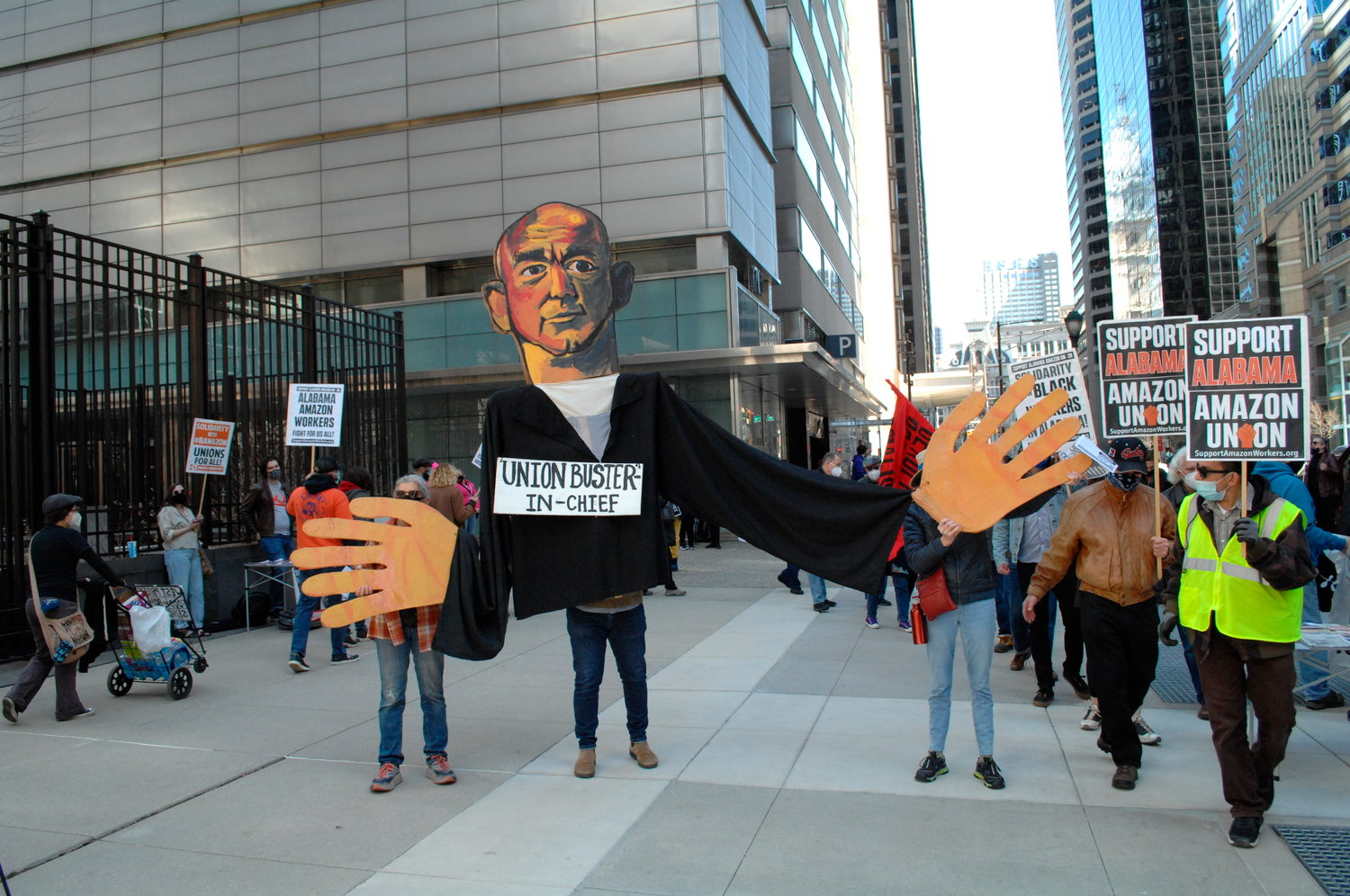 An effigy of Jeff Bazos stood in the center of a Philadelphia rally in solidarity with Amazon workers in Bessemer, Alabama, in March 2021 ahead of a unionizing vote there. A collective of philanthropic institutions has poured millions of dollars to help organizing efforts in five Southern states, including Alabama.
Cory Clark/NurPhoto via AP
Posted Monday, July 11, 2022 2:04 pm
BY CLARISSA A. LEÓN

When Daisy Chung began her work as director of the New York Nail Salon Coalition, she paid attention to the stories coming from workers, the vast majority of them women, nearly all foreign-born.

“When COVID hit and everything shut down, nail salons went from being open to 100 percent closed,” she recalled. “It’s that feeling of just being completely abandoned that really speaks volumes.”

This past May, nail salon workers rallied in Albany to push for legislation that would grant them increased pay and better working conditions.

The coalition effort’s could not have come about without support from the LIFT Fund, a collaborative of organizers, philanthropists, movement leaders, and academics, which awarded a grant to the Adhikaar, a New York-based social-justice nonprofit.

With LIFT’s money, Adhikaar provided support and funding for Chung and the coalition to operate. “Without the support of the LIFT Fund, the Nail Salon Coalition wouldn’t have been able to take time to meet with nail salon workers and have the several deliberations about what new policy protections would look like,” she said.

Last month, a collective of philanthropic foundations awarded LIFT, for Labor Innovations for the 21st Century, a hefty raise to fuel worker-organizing strategies such as the Nail Salon Coalition.

While LIFT’s annual grant-making budget has typically been in the $1.5 to $2 million range, an influx of $20 million from the collective — which includes The Ford Foundation, W.K. Kellogg Foundation, Solidago Foundation, The James Irvine Foundation, Omidyar Network, the AFL-CIO and the Service Employees International Union, among several other organizations — will significantly augment that.

In turn, it will boost nascent organizing efforts, according to LIFT’s executive director, Jennifer Epps. “Right now, there is a worker- and community-led movement happening across the country and philanthropy is using its position and resource to help meet this moment alongside grassroots and labor partners to ensure a more just and democratic economy for workers,” she said.

“This is our starting point to learn more about the region and invest in multi-racial coalitions advancing a more just economy and democracy that increases worker power, racial justice, and economic solidarity,” said Epps.

Amy B. Dean, a senior consultant for various labor organizations, said that the investment in labor wasn’t attractive for foundations until it became apparent that labor unions needed foundations' help and vice versa.

In the 1990s when Dean, whose consulting firm, ABD Ventures, works with social change organizations, served as president and CEO of the South Bay AFL-CIO Labor Council in Silicon Valley, it dawned on her and her colleagues that the labor movement needed shaking up. Among the questions she asked herself at the time, was “What's possible if you took the creativity of community and the power of labor, and you melded those things together, what could you build?”

“So, you had both labor community groups and then you had unions and worker centers that were just groups of workers that were either organizing based on occupation or geography or sometimes both,” she said. “And these were very organic sort of manifestations of organizations that said, 'We're going to build some things differently.' And philanthropy was core to that.”

That relationship has gone through growth spurts of late.

“In the last several years, it's really burgeoned in an interesting way in that you've got a couple of movements taking place that have caused and created this relationship of labor and community,” she said.

Young philanthropists, Dean notes, began investing and becoming interested in labor because of the innovative things labor was doing. Tech entrepreneur Pierre Omidyar, founder of eBay and the Omidyar Network, with an estimated net worth of $9.5 billion, started taking an interest, as did larger foundations including the Ford Foundation, Solidago and Open Society Foundations.

“Some of the people who worked early in the labor movement, and then went into philanthropy, are now in positions of influence where they're moving money to organizations that are trying to do labor-community organizing,” she said.

“Building a strong worker movement may be viewed as a political issue by some, but for us — and for the LIFT Fund — it is a human-rights issue,” said Rebecca Greenberg, senior program officer for Solidago, an organization that has funded the LIFT Fund.

Philanthropy has enmeshed itself within the labor movement to further advance foundations’ desire to tackle issues surrounding human rights, she noted.

“Partnerships between philanthropy and labor are rare,” she said, “but needed if we are to meet workers where they are and provide them with the support they need to change power dynamics in their workplaces, communities and the country at large, ultimately leading to a more equitable democracy.”

Greenberg dismissed concerns that the effort is ultimately political. “This is not political work, and it is not about evading any illegalities, because there is no legal issue to evade,” Greenberg said.

For Epps, the LIFT Fund will continue to focus their attention on workers, because, she also noted, it’s a question of equitability and justice.

“Workers are people, and people want and deserve to be heard and respected in their workplaces and communities, to be properly compensated, and to have access to benefits and opportunities,” she said. “Those are not political issues. This is what is necessary for a more equitable, democratic economy where everyone can thrive.”