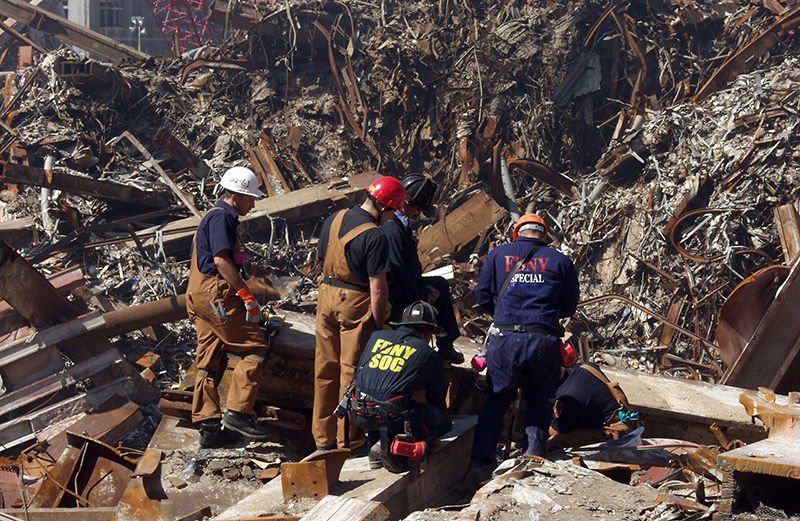 LINGERING PAIN ISN'T JUST PHYSICAL: Research by the Fire Department World Trade Center Health Program has found that it's common for those suffering from cancers and respiratory ailments caused by their exposure to the toxins at the site on the day of the terrorist attacks and the months of searching for remains that followed to also be dealing with mental issues such as post-traumatic stress disorder. The program offers treatment and counseling in both areas.

The 20th anniversary of 9/11 provides an opportunity to examine the success of the Fire Department World Trade Center Health Program that's based on a "holistic approach that integrates physical and mental health," according to Dr. David Prezant, the department's Chief Medical Officer.

Of the 15,200 FDNY active duty and retired firefighters, Emergency Medical Service personnel and department civilians enrolled in the program, 11,318—nearly 75 percent, have one or more health challenges that can include cancer, lung disease, and gastroesophageal issues while simultaneously dealing with a mental-health condition.

The program is a unique one and is a collaboration between the FDNY, the medical community and the unions that represent the department's uniform and civilian employees.

He added, "So many people have told us with [post-traumatic stress disorder] that every time they go up several flights of stairs and they have to use their inhaler because they are short of breath, it only exacerbates their anxiety, PTSD or their depression."

The program's research has found that FDNY personnel who were at the Trade Center the morning of the Twin Towers collapses or who lost loved ones faced "a substantial overlap in health conditions; for example, most with PTSD also developed anxiety, depression and physical health issues."

The program's study showed, "As of March 11, 2021, 21 percent were certified for both a physical and mental-health condition, and 7 percent are certified for all three care suites: physical health, mental health and cancer."

"The reduction in cancer-specific mortality was even greater for enrollees diagnosed with prostate cancer and with colon cancer, of which enrollees had nearly half the cancer-related death rate compared with the New York State population," the program found. "Likely causes include early detection, access to a full battery of no-cost treatment options at some of the finest medical centers in the nation, comprehensive case management and social support from family and fellow responders."

After 343 FDNY members died on 9/11, and 256 have died since, primarily from WTC-linked cancers or serious lung diseases.

The program found that participants with both mental and physical conditions "have the lowest average health quality-of-life scores, well below the average," which "highlights the importance of offering... members treatment approaches that combine their physical condition's standard of care with mental-health counseling services."

Retired FDNY Paramedic Gary Smiley, the 9/11 WTC Ombudsman for District Council 37's Local 2507, which represents Emergency Medical Technicians and Fire Inspectors, survived the collapse of the Twin Towers, at one point diving under his ambulance for cover. At the center of the debris cloud, he couldn't see anything and could hardly breathe.

He witnessed the worst of the human carnage, which included bodies of persons who jumped from the upper floors of the towers hitting the ground around him. For a few days, he was hospitalized with severe respiratory distress and smoke inhalation. But he was drawn back to the pile to work with his colleagues on the recovery effort.

Mr. Smiley was subsequently in chronic pain while facing multiple health conditions and battling PTSD. He said that historically, the culture of uniformed first-responders discouraged seeking out mental-health counseling for fear of the career repercussions.

"Those early days of the men and women being afraid about what was wrong with them—that doesn't exist anymore, thanks to the World Trade Center Health Program," he said during a Sept. 5 phone interview. "I was afraid to say how sick I was because I thought they would say I couldn't work anymore."

"You have to understand mental-health therapy is not a sign of weakness, and you owe it to yourself to feel better--you can let yourself be crippled by it," he said. "You have to reach out. It does help."

He got his care from the WTC Health Program at Mount Sinai Hospital, and is part of the program's monitoring studies. He said both programs stressed the importance of maintaining the monitoring and treatment.

Just 3,000 WTC-exposed firefighters and EMS providers remain on the job. As a condition of their employment, they undergo annual health screening.

Mr. Smiley said it's been a major challenge for his union to ensure that retirees continued to maintain their connection to the program, which provides the assessments and treatment at no charge.

"The retention rate for our EMS retirees is embarrassing," he said. "We have just 49 percent of retirees that actively go to medical monitoring. The firefighters are much better. They are almost 80 percent."

The program research indicated that it is retired FDNY rescue/recovery workers "have a consistently higher prevalence of screening positive for PTSD than their active (i.e., not retired) counterparts... These data highlight that maintaining participation and coverage under the WTC Health Program is crucial for retirees so they may continue to have the support of peers and access free mental-health counseling."

"In our line of work I think, especially before I came on the job in 1986, with the things we do day to day and the tragic incidents we live firsthand, we were far more likely to not speak of them--you internalized them," he said. "As time has gone on, we have become more aware of the mental-health issues that put stress on our lives...It is no longer taboo to say 'I am having some problems with dealing with something,' and it's OK to talk to someone."

According to the program's report, 98 percent of the FDNY participants knew some of the 343 FDNY personnel killed on the day of the attack. Over 70 percent lost a close friend, with 8 percent surviving a family member who perished. Close to one in four lost non-FDNY relatives and friends.

"The close bonds formed between the survivors and those we lost help to explain, in part, the extent of our members' suffering in the aftermath of 9/11," the report stated. "Members whose firehouses/EMS stations suffered greater losses were more likely to have symptoms of PTSD. However, despite their grief, our members dedicated themselves to serving NYC and rebuilding the Department."

It continued, "Many members who worked at the WTC site did not allow themselves time to grieve for those lost or to adjust to their new normal, so mental-health problems tended to surface later, once the search slowed and they had time to process their emotions. For some, this process was delayed until after retirement."

According to Dr. Prezant a key ingredient of the program's approach has been a "cultural framework" that goes beyond the screening, monitoring and clinical care, which often involves enrollees who volunteer to help other participants.