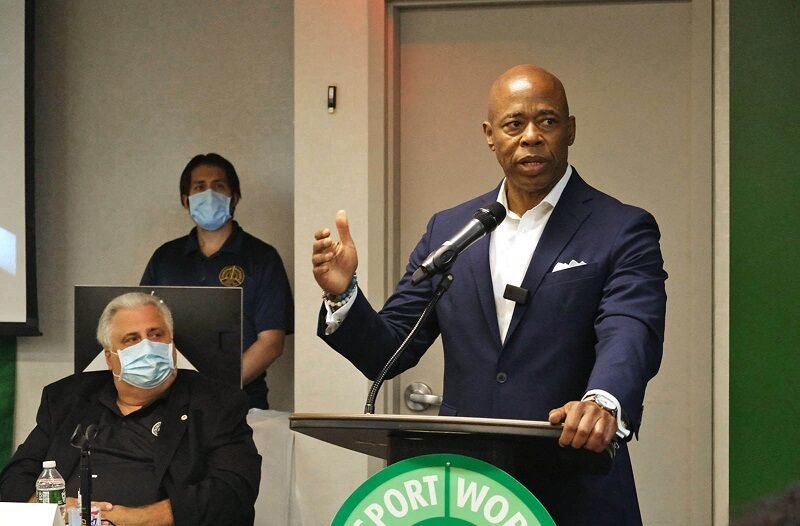 'MTA COULD HAVE DONE BETTER': Democratic nominee for Mayor Eric Adams questioned the Metropolitan Transportation Authority's early decision to not only withhold masks from transit workers but threaten them with discipline if they wore their own. With Transport Workers Union Local 100 President Tony Utano looking on, he said, 'the system had almost a million masks and they were saying you couldn't get one.' 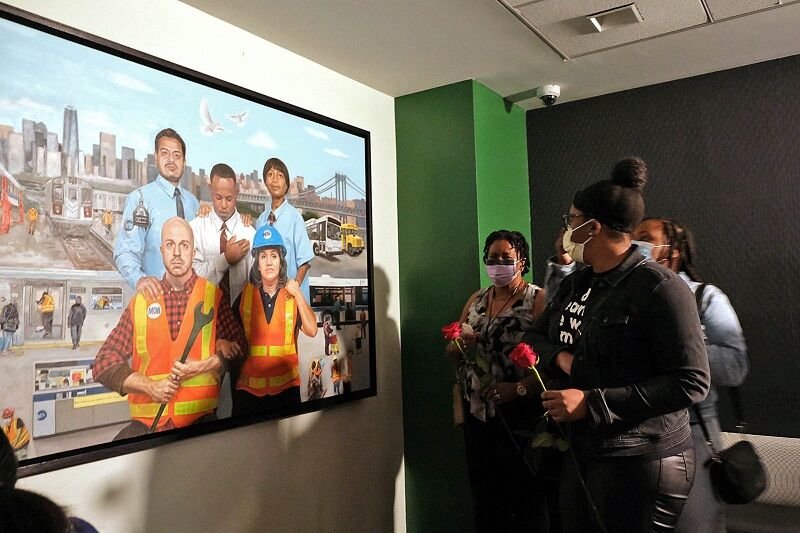 HONORING THOSE WHO GAVE THEIR LIVES: Some of the widows of transit workers who died after being exposed to the coronavirus at work examine a painting of transit workers by Taha Clayton that is part of the memorial that also identifies those who died and their work locations, which was unveiled Sept. 30.

The unveiling of the permanent memorial for the 110 members of the Transport Workers Union who have died from coronavirus at the union's Brooklyn headquarters on Sept. 30 was a solemn occasion of remembrance and resolve.

Mr. Adams declared that the city had "betrayed" Metropolitan Transportation Authority workers who died from  exposure to the virus, which often infected workers' families, too, because "the system had almost a million masks and they were saying you couldn't get one."

"I knew that because I was with you [when] we moved together when we fought to get you just masks," Mr. Adams said. "I remember going to the bus depot and having the workers saying we would do our job; just help us through this."

"We divided the city into essential and non-essential workers," he said "We told those who could stay home, who can work remotely, to do their jobs. We told them to keep a safe distance. You can be with your families. But then we told another group of people, you are going to go out and move our city...You are going to stock our supermarkets. You are going to be in the hospitals and make sure you take care of our families."

In an interview after the service, Mr. Adams said that there needed to be further investigation into the MTA's pandemic performance. "Too many TWU employees did not have masks," he said. "They [the MTA] did not have execution. It was poorly done. They could have done a better job."

'Could Have Done Better'

"We had pandemic plans on the shelf," Ms. James said about the MTA's performance. "We needed to dust them off and operationalize them, and hopefully Governor Hochul and the next Mayor, Eric Adams, will do that."

To date the MTA has had 173 deaths, including one last month. Agency officials were not invited to the union ceremony, but spokesman Tim Minton said in an email, "The MTA has been an industry leader in protecting transit workers and riders, distributing 35 million masks while making trains and buses the cleanest they've ever been. "At the start of the pandemic, when [U.S. Centers for Disease Control and Prevention] scientists were still discouraging masks, MTA leaders authorized their use by employees in less than a week."

It wasn't until early April last year, two weeks after then-Gov. Andrew Cuomo placed the state on lockdown, that the CDC reversed its early guidance that advised healthy individuals not to wear masks so that the nation could preserve the limited supply of personal protective equipment. Early on, MTA management threatened to discipline employees who wore face coverings.

Ms. James linked transit workers' heroics during the early weeks of the pandemic to their response to major storms during which Bus Operators provided sanctuary to members of the public stranded in their cars as flood waters rose rapidly.

"It was the TWU that was there," she said. "And let's not forget all of those that worked in the pile after 9/11. The three men that died [in the attack]. They must be remembered, and all those who have died of 9/11-related illnesses, and all those who are still struggling with COVID who can't breathe, who can't come tonight. They are heroes. They are sheroes."

"We are here to mourn in a special and dignified way the passing of our brothers and sisters who fell to the coronavirus," TWU Local 100 President Tony Utano said. "But most importantly we are here to honor the families of those fallen brothers and sisters. They carry the pain of loss every day of the week, and they will do so for the rest of their lives."

He continued, "Because of their work and sacrifice, there is a new national acknowledgement that transportation workers are essential to the entire economic structure of America. This will always be a part of our legacy."

The memorial depicts the city's mass-transit system with lights that represent the union members who died from the virus and their work locations, next to an original painting by Taha Clayton of five transit workers who represent the rank and file. The memorial was funded by the TWU Local 100 Retirees Association.

Local 100 spokesman Pete Donohue said the memorial will be periodically updated to reflect the continuing toll from the ongoing. The commemoration comes during a heated union election campaign in which union leadership's response to the crisis is a prominent issue.

Veronica Fletcher, who lost her husband Joseph, a Bus Maintainer at the Flatbush Depot, was in attendance with the couple's three children Joshua, Madison and Zachary.

"He was 60 years old with no underlying conditions," she said. "He was a hero for this city at a time when people shut their doors, when they tried to get the virus out. Like a warrior he went into the trenches to help people that he didn't know—strangers—to help them keep their lives going, to help them save their lives and take care of their families."

"When my husband got sick, I almost died because I had COVID while I was taking care of him—my children had COVID as well," she said. "We were so completely isolated."

Ms. Fletcher, a former city Teacher who was disabled in a car accident on her way to work, said the $500,000 death benefit was essential to her family's survival. "My husband was our only provider," she said. "I don't know where we would be without it."

The mother of three plans to work with Local 100 to start a support group to help the spouses who have lost a loved one to the virus.

"There is something about losing someone that you love and with whom you were in love—that's a different kind of grief," she said. "And those with children as well, because our children are now half-orphans and our children need each other in a unique way, because they understand what each other has been through. And we need them to bridge the gap because our spouses are not here."