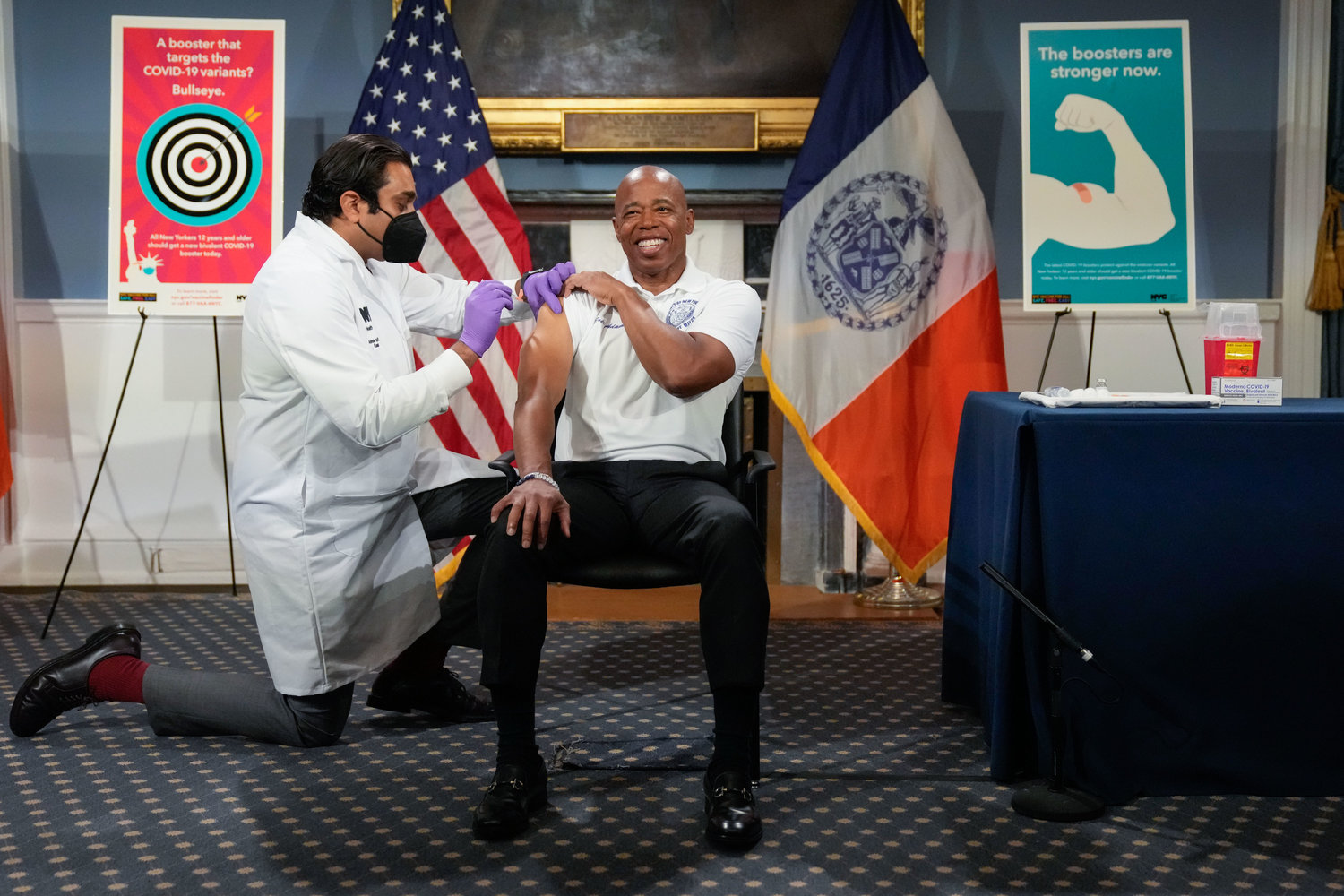 Mayor Eric Adams received his second Covid booster shot from Department of Health and Mental Hygiene Commissioner Dr. Ashwin Vasan at City Hall on Tuesday. Municipal unions were sharply critical of the mayor's announcement that private businesses would be exempt from vaccine mandates starting Nov. 1, while city employees would have to continue to adhere to the directives or lose their jobs.
Michael Appleton/Mayoral Photography Office
Posted Tuesday, September 20, 2022 4:35 pm
BY DUNCAN FREEMAN

The city’s private businesses will no longer have to require their employees to be vaccinated against Covid, Mayor Eric Adams announced Tuesday, a pronouncement seized on by the heads of several municipal unions, who demanded that mandates for city workers also be lifted. The labor leaders characterized the new exemptions as a betrayal of municipal employees, many of whom rode out the worst days of the pandemic while on the job.

“This announcement is more proof that the vaccine mandate for New York City police officers is arbitrary, capricious, and fundamentally irrational,” the president of the Police Benevolent Association, Patrick J. Lynch said in a statement issued soon after the mayor’s morning announcement.

He and other union leaders were hopeful that Adams’ announcement would add evidence to pending suits that challenged the city’s vaccine directives, imposed last year during former Mayor Bill de Blasio’s tenure, which obliged city workers to get the jabs or face termination.

“Now that the city has abandoned any pretense of a public health justification for vaccine mandates, we expect it to settle our pending lawsuits and reinstate with back pay our members who unjustly lost their jobs,” Lynch continued.

Adams, though, did not, for the time being, back off from requiring city workers to be fully vaccinated as a condition of their continued employment. “Right now, that is not on the radar for us,” he said in answer to a question about whether he was considering scaling back the mandate for municipal employees.

A few minutes earlier, speaking before getting his booster shot from Department of Health and Mental Hygiene Commissioner Dr. Ashwin Vasan at City Hall this morning, the mayor said the city would “continue to lead the way by example.”

“Our vaccinated workforce kept the city open and operating with over 300,000 employees it was crucial to put it in place and we are keeping that in place. Vaccinated workers have carried out their jobs and they stepped up when the city needed them the most and we think it's imperative to send the right message and lead by example, as I'm doing today by getting my booster shots.”

The mandate for private employers, as well as for students participating in after-school activities, including sports, expires Nov. 1.

“Let’s be real, the Mayor knows that people aren’t avoiding the return to their office because of the mandate — it’s fear of the city’s crime crisis,” he said in a statement. “Based on this arbitrary decision, the union will be in court tomorrow and expects to have our highly-experienced Detectives, who were unjustly cast aside, reinstated and reimbursed.”

During a subsequent phone call, DiGiacomo said the mayor’s new directive was, at best, inconsistent. “I don’t think it’s appropriate to carve out a segment of the population, especially police, who have been through this since the beginning,” he said, alluding to the pandemic.

“One detective lost because of this mandate is one too many,” he added.

The president of the United Firefighters Association, Andy Ansbro, among those union leaders who has been most fiercely critical of the city’s vaccine directives, echoed those sentiments. “New York City firefighters are still facing the ax,” he said during an afternoon Zoom call with reporters. “If these members lose their jobs, they’ll take years of experience with them.”

Adams, Ansbro said, “needs to stop treating his employees like second-class citizens, end the mandates for everyone and bring the [fired] employees back.” He noted that 18 firefighters were terminated when the mandates took effect, 12 quit before the mandates went into effect and 200 others have exemption claims still pending.

The president of the the United Fire Officers Association, James Mccarthy, said 40 to 50 of his members quit before the mandates took effect while one was fired.

Harry Nespoli, the president of the Uniformed Sanitationmen's Association and chair of the Municipal Labor Committee, ripped Adams’ new prescription and alluded to his dispensation, earlier this year, of visiting professional athletes and entertainers from the mandate.

"It's appalling that the city is now creating a three-tier system, originally exempting the elite, now one for the private sector and still nothing for the essential workers of our city,” he said. “How can the city leave behind the very people they mandated to come in every day without vaccines to keep things running when everything was shut down?”

Council Member Joann Ariola who has long campaigned against the vaccine directives, said that “Lifting the mandates for the private sector and for after school programs is a tremendous step forward, and gives me great hope that the Mayor and the Health Department will continue working to roll back the mandates that were placed on city workers as well.”