Victim-Comp Deadline for Some 9/11 Responders and Survivors 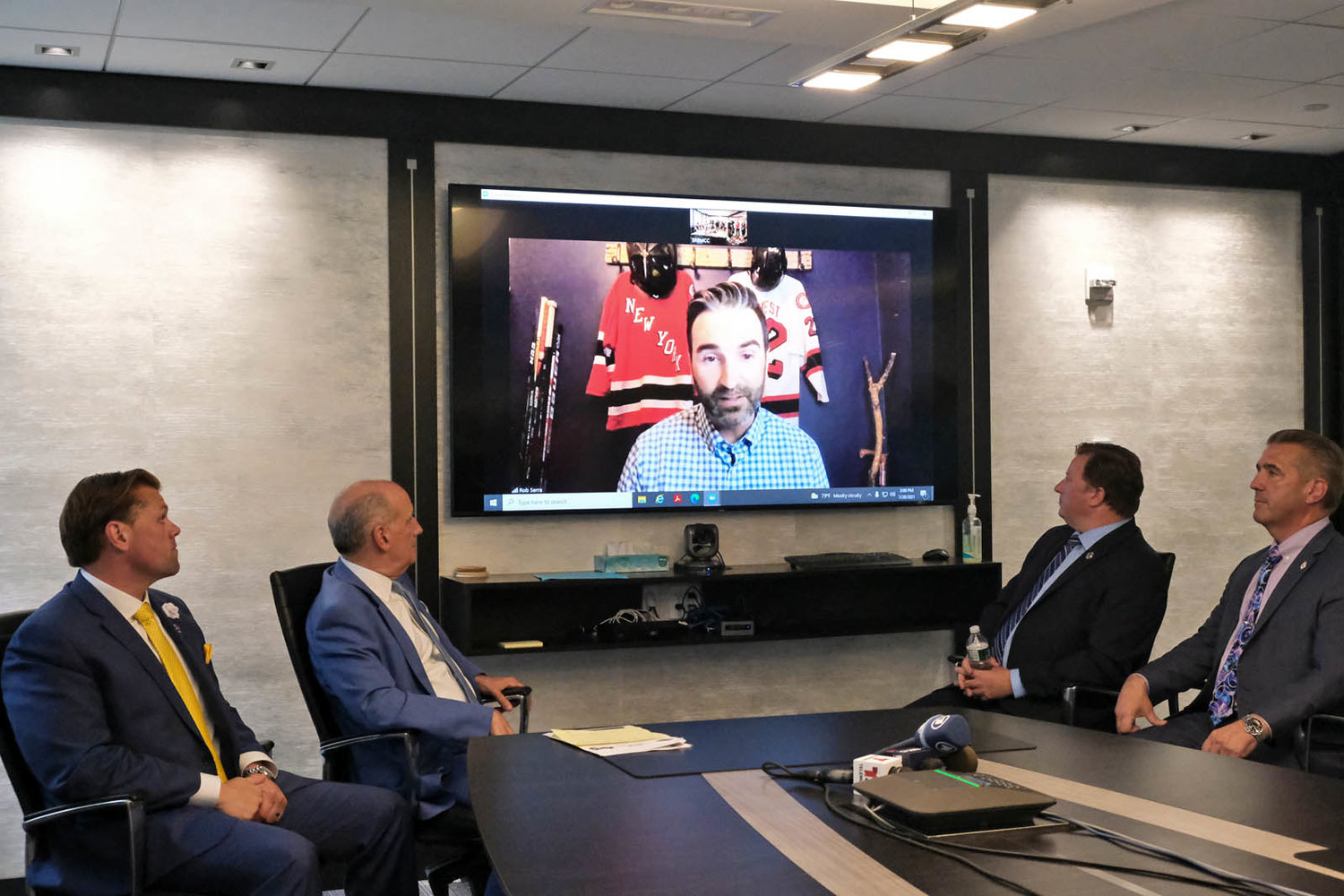 STAYING ELIGIBLE: Ex-Firefighter Rob Serra, who responded to the World Trade Center terrorist attacks and is a WTC Health Program participant, communicates with Uniformed Firefighters Association officials—including President Andy Ansbro (at right) and their attorney—July 28, a day before the deadline for those who'd been certified with the program for two years to register with the 9/11 Victim Compensation Fund for a possible monetary award. Registering preserved their right to file a future claim.

July 29 is the last day that 9/11 World Trade Center Health Program participants who have been certified with that program for two years, and families who lost a loved one to a 9/11-linked health condition more than two years ago, to register with the 9/11 Victim Compensation Fund for a monetary award.

“Registration is not the same as filing a claim,” according to the VCF web page. “Registration preserves the right to file your claim in the future, waives no legal rights, and does not obligate you to file a claim.”

Registration can be done online. If you are not able to access a computer, you can register over the phone by calling the VCF Helpline at 1-855-885-1555.

Registration preserves the right to file a claim in the future, waives no legal rights, and does not obligate you to file a claim. It also allows the VCF to meet the requirement of timeliness under the law.

It takes a few minutes and requires only a few pieces of personal information.

So far, the VCF has paid out $6.67 billion in compensation to tens of thousands of first-responders and World Trade Center survivors, a category which includes individuals who worked, attended school, or lived in lower Manhattan south of Canal St.

The geographic area covered by the WTC Health Program, which provides free screening as well as health care and mental-health counseling, is much wider. It includes all of lower Manhattan south of Houston St. and portions of western Brooklyn.

In July 2019, Congress permanently funded the 9/11 VCF program, which also provides monetary compensation for  survivors in areas related to or along the routes of debris removal, such as barges and the Fresh Kills landfill.

The fund does not provide compensation for losses related to mental-health issues, which are treated for free for certified WTC Health Program participants.

In addition to the 80,000 first-responders and estimated 300,000 civilian survivors, close to 19,000 young people who attended dozens of city public schools in the toxic-exposure zone may be eligible.

According to the WTC Health Program, over 70 percent of its participants have more than one certified health condition. More than 21,000 have at least one cancer certification, and 1,366 program participants who had a WTC- linked cancer have died.

Dr. Jacqueline Moline, director of the Northwell Health Queens World Trade Center Program, told a Congressional panel in 2019 that the WTC Health Program had seen an exponential increase in many cancers and that “soon the day will come when there are more people that died of WTC-related diseases after 9/11 than perished that horrible day [2,973].”

Dr. Moline estimated that as many as an additional 20,000 cancers could develop as a consequence of exposures to the contaminants released by the collapse of the Twin Towers following the terrorist attacks and the fires that burned for months at the site.

The original law was named for NYPD Detective Zadroga, who was 34 when he died in 2006 from WTC-linked occupational exposure after working close to 500 hours on the debris pile.

Firefighter Raymond Pfeifer, who was with the FDNY from 1987 until 2014, was one of the lead advocates for the passage of the original legislation. He died in 2017 at age 59 from cancer.

Detective Alvarez, whose congressional testimony pleading for the VCF’s renewal went viral, died June 29, 2019 at age 53 from colorectal cancer linked to his three months at the WTC site.

Michael Barasch, an attorney with an extensive 9/11 WTC practice, said that while a high percentage of the eligible first-responders have enrolled in the WTC Health Program, just a small fraction of eligible survivors have done so.

“The reality is that of the responders, over 80 percent of them have enrolled in the free health program, which is wonderful,” he said during a phone interview. “You have to give the unions credit for educating their members...of the survivors—that is the 300,000 office workers, the 50,000 students, the 25,000 downtown residents—only 7.5 percent of them have enrolled in the WTC Health Program, because they either don’t know they are entitled to the benefits, or they mistakenly think that is just for first-responders.”