'A Sense of Duty to City and Nation': Trades Workers 'Rose to Occasion' 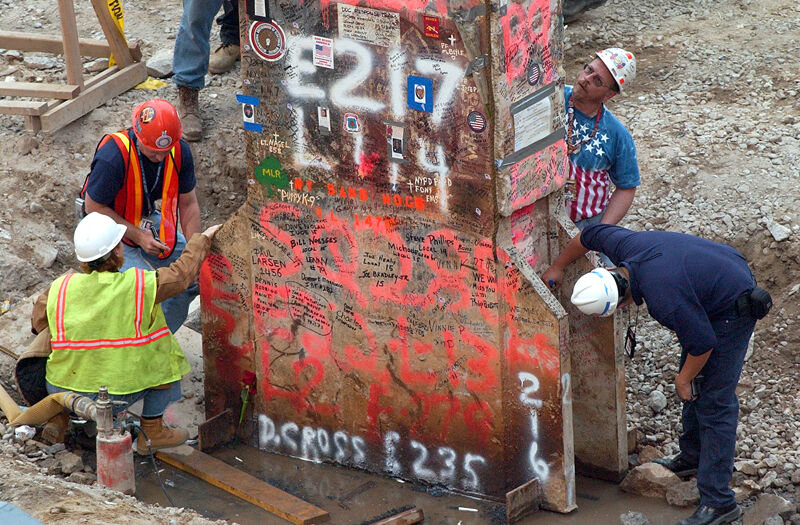 UNALLOYED COMMITMENT: Upward of 10,000 laborers affiliated with the Building and Construction Trades Council of Greater New York made their way to the World Trade Center in the hours and days following the Sept. 11 attacks. Gary LaBarbera, now that organization’s president but the head of Teamsters Local 282 at the time, said the rescue, recovery and cleanup efforts at the site reflected some of the best of humanity. Above, ironworkers prepare to cut the base of the last remaining steel beam at the site on May 28, 2002.

Not long after the first plane slammed into the North Tower on that otherwise tranquil September morning, Gary LaBarbera, then head of Teamsters Local 282, and his colleagues at the union's Lake Success offices started getting phone calls from laborers working near the World Trade Center, alerting them to the disaster.

Within a few more minutes, when United Airlines Flight 175 punched into the South Tower, alarm turned to dread. Within an hour, Mr. LaBarbera, now the president of the Building and Construction Trades Council of Greater New York, and his co-workers watched on television as both towers crumbled to the ground.

“Many of us knew people that were in the buildings,” he recounted recently. Sixty-one members of the Building Trades who were working inside the towers perished on that day.

Through the rest of that morning and into the afternoon, an estimated 10,000 members of the Building Trades—ironworkers, electrical workers, laborers, operating engineers, truck drivers, masons and others—“from literally all five boroughs put their tools down” and made their way to the smoldering piles.

Once at the site, they joined with uniformed services to begin the daunting task of finding survivors. Mr. LaBarbera and Teamsters officials would make the 20-mile trip from Nassau County later that afternoon, forming part of a bucket brigade to help clear the initial cascade of debris.

“There was a perimeter set up. But if you showed your union card showing that you were a member of the building trade unions, they were letting you come right in,” he said.

All the trades were there, forming a mini-army of vastly experienced laborers as the rescue gathered momentum. But they were no match for the enormity of the day’s events.

“It was complete mayhem,” said Mr. LaBarbera, who also was head of Teamsters Joint Council 16 at the time.

The atmosphere was uncanny, not least because the entire area was covered in a foot and a half of gray dust, which had yet to all settle in the blocks surrounding the World Trade Center complex. “It was almost like walking through snow,” he said of trudging to the site in his Red Wing work boots.

Walking by the Winter Garden off West St. was like ambling through “a moment frozen in time,” he said. Half-eaten dishes of food and unfinished drinks sat untouched on nearby restaurant tables.

“It was completely surreal,” he said. “It really didn’t look real...But we knew it was real.”

While no one had trained for such an event, the Teamsters worked diligently, and exhaustively, through the following days and nights. “We played a really important role because all of the debris that had to be removed; we were the ones actually moving it off the site with the trucks,” bringing it to what was then the Fresh Kills Landfill on Staten Island," Mr. LaBarbera said of the Teamster drivers.

That stark labor was made all-the-more arduous, wearying and hellish when workers discovered body parts. “You would hear air horns blow on the site, very loud. And that meant that they found remains,” the union leader said. “And so everything on the site literally stopped until they were brought off the site.”

About 800 trucks were moving debris off the site around the clock for weeks.

“Basically what was going on there was being done voluntarily, and was being coordinated in an ad-hoc way,” he said. He was spending as much time as he could at the site. “There was that sense of duty to the city, to the nation, and everyone just rose to the occasion,” he said.

But in the immediate aftermath, on the day after the attacks and through the early part of that week, husbands, wives, sisters, brothers, friends, colleagues stood outside perimeter fencing holding pictures.

“And they would, like in desperation, say, ‘Have you seen this person?’ They didn't understand that, you know, there were really no survivors,” Mr. LaBarbera said. “That will always be etched in my memory—the desperation and despair and pain on family members’ faces. The only thing you could feel was compassion for them. You knew after frankly 48 hours that there were still going to be no survivors.”

Too soon for some, rescue turned to recovery and then to clean-up. Organized labor, Mr. LaBarbera said, took the lead in that effort.

He also credited Larry Silverstein, the real-estate titan who would go on to redevelop the World Trade Center.

“From day one, he had the sense that we have to rebuild,” Mr. LaBarbera said. “Building that back was so important.”

Mr. LaBarbera, a Commissioner with the Port Authority of New York and New Jersey, whose offices are at 4 World Trade Center, called the memorial and reflecting pools "magnificent. “It's a testament, without attribution to anyone, it's a testament to our city and to our nation,” he said.

He said he makes sure to take time either before or after PA board meetings to walk the grounds nearby. But he does not do so in the footwear he wore that Tuesday 20 years ago.

“Those boots, I never wore those anywhere else,” he said. “It was like I had walked on hallowed ground.”