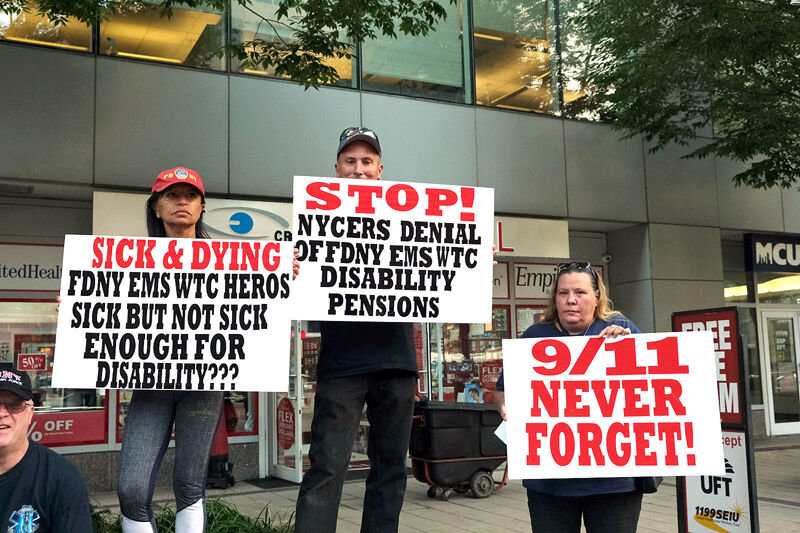 CONFUSION AND DISILLUSION: Amid numerous other complaints about unfair treatment of 9/11 first-responders and survivors, some advocates say that boundary lines for the Victim Compensation Fund were too narrowly drawn, not stretching far enough into areas of the city where smaller particles released into the area by the destruction of the World Trade Center spread and infected residents and workers.

"If you were south of Canal St. in lower Manhattan on 9/11" is the way the law firms seeking clients they hope to enroll in the Federal Victim Compensation Fund start their ads, which go on to mention that, besides cash compensation from the VCF, potential clients could also be entitled to free medical care for whatever World Trade Center ailments they may have.

Advocates for first-responders and civilian survivors of the attack are unhappy that those ads omit the fact that the geographical area for participation in the WTC Health Program, which provides free care for anyone with a certified  Trade Center condition, is far wider than the boundaries described by those law firms.

From Houston to Brooklyn

While the VCF catchment area in lower Manhattan is, as described, south of Canal Street, the WTC Health Program zone is much larger, starting at Houston St. and including SoHo, Little Italy and the Lower East Side, as well as a portion of western Brooklyn. Making this distinction widely known has added urgency amid the coronavirus pandemic that's proved particularly deadly for people with WTC health conditions, according to union officials and community activists.

"We so frequently have to explain the intricacies of the maps and who does qualify for what services because obviously the law firms that represent VCF claimants have a much louder voice than we do," said Lila Nordstrom, a former Stuyvesant High School student and founder of StuyHealth, a non-profit that does outreach to young people who attended schools in the WTC exposure zone. "So, a lot of people get the impression these resources are only available below Canal St. and think it only extends to that portion of lower Manhattan...It's also created confusion for the people who live between Canal and Houston."

The exposure zone was determined after an intense public debate in the years that followed the attack and the several months of the cleanup in which local community groups and union activists fought the city and Federal bureaucracies to extend the designation of neighborhoods that would be eligible for WTC Health Program coverage and the VCF.

Even Goes Beyond That

Uniformed Firefighters Association President Andy Ansbro said that the fallout of debris from the raging fires and collapsed towers extended far beyond the current boundaries of the Federal Emergency Management Agency map that formed the basis for the WTC Health Program's coverage area, and the more restrictive VCF map.

"It spread far and wide," Mr. Ansbro said. "My wife actually lived in Marine Park at the time and there was paper from the World Trade Center in Marine Park, that's [10] miles away."

Catherine McVay Hughes, a civil engineer by training and a former Chairwoman of lower Manhattan's Community Board 1, which includes the WTC site, recalled that U.S. Rep. Jerry Nadler, who represents the neighborhood, consistently challenged attempts by government agencies to narrow the impact zone.

"There's always conflict when your defining boundaries," she said said. "But Congressman Nadler had the perfect quote he used repeatedly, saying it 'wasn't like there was a bubble, or magic shield that would stop the dust cloud on 9/11 or in the months after that.'"

Ms. Hughes, who serves on the WTC Scientific/Technical Advisory Committee, recalled Board 1 meetings where residents and business owners brought in photographic evidence documenting what they witnessed. "Without  Community Board 1, there would have been an even smaller area that would have been defined," she said. "It took a lot of years and a lot of work to get what we got. So, I really hope the people who are eligible get the health care they need."

In 2011, Kimberly Flynn, the executive director of 9/11 Environmental Action, and Rob Spencer, director of media services for the Organization of Staff Analysts, were co-chairs of the WTC Health Program Survivor Steering Committee when the US Department of Justice was considering how to implement the James Zadroga 9/11 WTC Act.

Those deliberations included mapping the boundaries of the eligibility area for the VCF.

"Under the draft rules, survivors exposed to WTC dust and smoke above the proposed Reade Street boundary line who are eligible for the WTC Health Program (Title I of the James Zadroga 9/11 Health and Compensation Act) would be deemed ineligible for the WTC Victims Compensation Fund (Title II of 'Zadroga')," they wrote the DOJ. "The proposed Reade Street boundary line has no scientific or medical basis. We understand that its selection was at least in part based on an assessment of the extent of deposition of visible dust caused by the initial collapse cloud using aerial or satellite imagery."

Ms. Flynn and Mr. Spencer offered extensive photographic and video evidence and previously completed health studies to show that the proposed VCF boundary was too limited.

Their letter asserted the initial Reade St. boundary was "problematic on several fronts" because it "used the visible dust cloud as the proxy for harmful exposures" and ignored that "smaller, highly respirable particles" traveled much further than coarse particles. Those, they said, were "often invisible to the unaided eye, and are inhaled much deeper into the lung."

Using only the cloud from the initial collapse, they wrote failed to "address the fact that people were exposed to a steady stream of additional contamination from the fires that burned at the site for months after 9/11 as well as dust suspended in the cleanup and transport of hazardous debris from the WTC site."

They also asserted the preliminary map failed "to address the fact that people were chronically exposed for months and even years to indoor WTC contamination in homes, schools and workplaces that were not cleaned or were improperly cleaned" and that "there are known and compelling examples of WTC indoor contamination beyond the Reade Street boundary."

"We urge that the rules be revised to make the boundaries established for VCF eligibility consistent with the Houston Street and Brooklyn boundaries for eligibility for the WTC Health Program," they wrote. "The Title I boundaries are based appropriately on medical evidence, which is the best evidence available."

During a recent phone interview, Ms. Flynn and Mr. Spencer reflected on the impact of their advocacy.

The conflicting boundaries still present real challenges for WTC first-responder and survivor advocates looking to get people whom they believe should be eligible signed up for both programs.

Court Lieut. Angela Shirlaw, who volunteers as a WTC benefits ombudsman for her colleagues, many of whom have developed serious WTC health conditions, said, "I have, I kid you not, about 30 Court Officers who are sick in Brooklyn who are young and are getting a difficult time with the WTC Health Program because their work site is a block out from that boundary. As soon as the plane crashed, a lot of these folks went immediately outside the building. A lot of them went to the Promenade and a lot of them went to the foot of the Brooklyn Bridge to assist emergency vehicles get over and the folks getting over the bridge, but now they are getting such a hard time getting registered and certified for the health program."