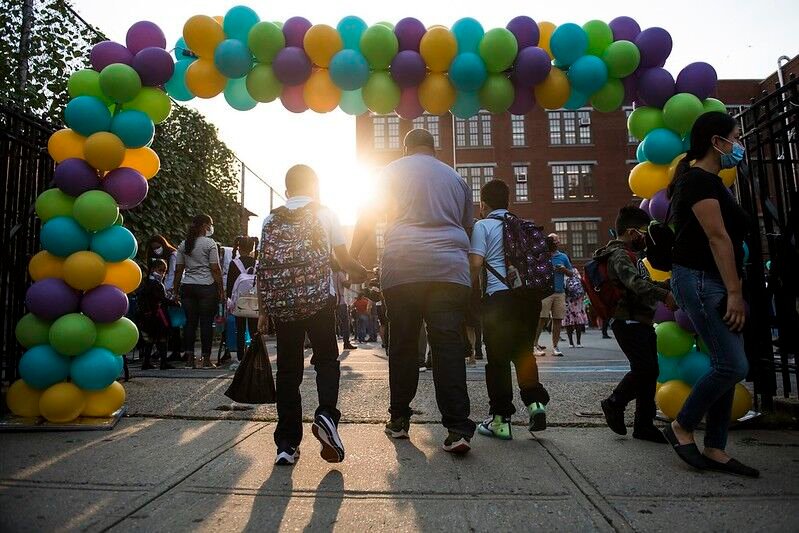 NOT ALL SUNSHINE AND RAINBOWS: Social-distancing and coronavirus testing protocols were called into question at an Oct. 6 City Council hearing, where United Federation of Teachers President Michael Mulgrew called reductions in quarantine and test-and-trace procedures 'disgusting.'

The Council questioned officials about social-distancing guidelines. While the U.S. Centers for Disease Control has recommended that students stay three feet apart, which is measured from nose-to-nose, many classrooms have desks crammed nearly on top of each other, raising concerns.

The DOE said that desks were arranged so that students were three feet apart when measuring from the center of each desk.

"This was done because they want to be able to say they brought back every child," he said. "They're trying to veil it as the CDC when it's not."

He also criticized the DOE's decision to scale back quarantine protocols late last month. Unvaccinated students who are exposed to coronavirus are no longer required to quarantine if they are masked and maintain three feet of social-distancing, while previously they would have been required to learn remotely for 10 days.

Mr. Mulgrew called the changes "disgusting," adding that Test and Trace Corps has stopped performing investigations about how COVID was transmitted in schools.

From 'Model' to Travesty

"It's a shame, because at one point our test-and-trace facility was a model of what to do, and now it's a model of what not to do," the exasperated union leader said.Also under fire were testing policies. Ten percent of unvaccinated students at every school are supposed to be tested each week, according to the current policy. But only 192,705 students have returned consent forms allowing them to be tested.

Compounding the frustration was the DOE's not knowing how many students were vaccinated. Health officials estimated that 74 percent of children 12 and up had been inoculated.

City Council Member Mark Treyger, who chairs the education committee, questioned the scale of COVID testing and whether each school was able to test 10 percent of its student population.

"As far as I'm concerned, there is no testing program in schools," he said.

The biggest point of contention during the hearing was student-enrollment attendance data. While the DOE reported that 86 percent of students attended school on Oct. 5, education officials declined to state the number of students  currently enrolled.

DOE First Deputy Chancellor John Conyers stated that enrollment was in flux and the data would be available by Oct. 31, as mandated by the state.

"It is unfathomable to me—and insulting to this committee and to the public—that they will not share the attendance data and information," Mr. Treyger argued.

Some parents have kept their children out of school because of virus-safety concerns, while others may have left the system altogether. Parents have continued to call for the DOE to provide a wide-scale remote option.

He added that instead of obscuring these figures, the city needed to focus on finding the missing students and "let's figure out how to get them comfortable with schools."

Mr. Treyger said he has heard estimates that 150,000 students have not stepped foot in school since Sept. 13.

Deputy Chancellor LaShawn Robinson did not provide a figure, but said that she has seen "unofficially, that that number is far from accurate."

Donald Nesbit, Executive Vice President of District Council 37's Local 372, said that there were already about 1,000 fewer school food employees at the beginning of this school year compared to last—and that was before the vaccine mandate took effect. He described shortages in certain schools, including one in the Bronx that had just one Cook and school lunch helper on hand.

About 92 percent of school lunch workers were inoculated.

He believed that city could have done a much better job educating staff about vaccines, particularly among black and Latino communities where vaccine hesitancy was high. Mr. Nesbit also questioned why some requests for vaccination exemptions were denied by the DOE, including the case of a Parent Coordinator who got COVID in August and was told by her doctor to hold off on getting the shot for 90 days.

"We need to look at exemptions," he said.