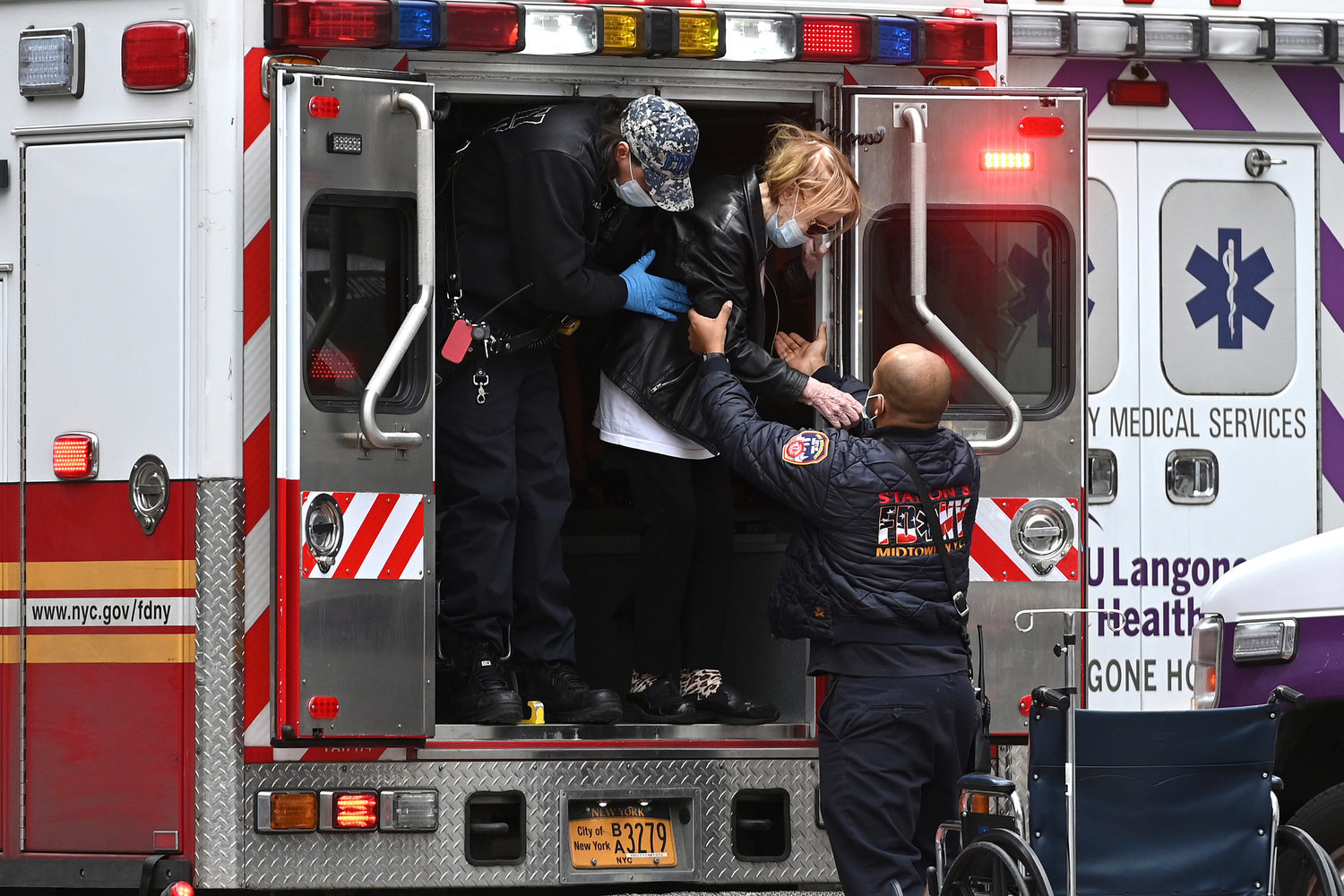 Unions representing EMTs, paramedics and EMS officers are suing the FDNY and the city after the federal government found that EMS first responders are being discriminated against. The suit alleges that EMS workers, 55 percent of whom are non-white, carry out similar duties to firefighters for far less pay.
Anthony Behar/Sipa USA via AP Images
Posted Tuesday, January 10, 2023 9:27 am
BY DUNCAN FREEMAN

The suit, filed last month, followed a determination by a federal commission that such discrimination exists.

The workers had filed charges of discrimination with the U.S. Equal Employment Opportunity Commission in 2019. The EEOC issued a determination in late 2021, finding that the city “discriminated against current and former First Responders of the FDNY’s EMS ... based on race and sex.”

The EEOC determined that “any difference in duties between the EMS first responders and firefighters fails to explain the pronounced gap in wages and benefits, and [the city has] failed to adjust the pay scales of EMS first responders to keep pace with the changes to their duties since the City merged EMS with the Fire Department in 1996.”

The Department of Justice notified the first responders of their right to sue in November and the unions filed the suit the following month. The suit was first reported by news site Work-Bites.

“While we cannot comment on the details regarding the ongoing litigation, I can say that this is an historic moment for New York City’s Emergency Medical Servicemembers. I appreciate the work of the EEOC and grateful for its findings,” Oren Barzilay, the president of Local 2507 which represents uniformed EMTs, paramedics and fire inspectors, said in a statement.

The suit says that since the early 2000s, the FDNY has focused far more on responding to medical emergencies than structural fires, yet resources are unequally distributed. In 2019, the suit says, EMS responded to more than 80 percent of the city’s emergency call volume but received only 16 percent of the FDNY’s budget.

The suit’s central complaint is that FDNY employees on the EMS side carry out the same amount of work than firefighters do but earn far less.

The suit says that more than half of the 560,474 calls to which firefighters responded in 2020 were medical emergencies while 2,252 were confirmed fires.

Paramedics and EMTs both won big raises in the contract Local 2507 negotiated in 2021 but they still make far less than firefighters, the suit notes.

The suit also notes that firefighters have unlimited leave in cases of both sickness and line-of-duty injuries while EMS first responders get just 12 days of paid sick leave and a maximum of 18 months off after a line-of-duty injury.

“EMTs deserve to be able to support themselves,” said Jose Prosper, president of the FDNY’s Hispanic Society. “All of the [EMS workers] deserve a raise.”

The FDNY declined to comment on the suit. A city Law Department spokesperson said only that “The case is under review.”

Members of the FDNY who say they have faced discrimination have increasingly turned to the courts to find relief. In September, a federal judge certified a class action claim brought by the FDNY’s fire protection inspectors because they make far lower salaries than Department of Building inspectors for what they allege is similar work.

The Vulcan Society, a fraternal organization of black firefighters, filed a discrimination complaint with the federal EEOC in 2002. That complaint was eventually certified, leading to a class-action suit against the FDNY and a massive settlement, the appointment of a court monitor and a revamp of the FDNY’s entrance exam.

Some minority firefighters have also had their claims of harassment heard in the courts after finding little relief through the FDNY’s EEO.

The EMS unions hope their suit is certified as a class action as well so that EMS first responders can get monetary relief for the disparities in pay and what they claim is “occupational segregation” within the FDNY. They say the disparities reached the highest ranks of the EMS service. An EMS division chief or commander who oversees an entire borough of EMS stations and responds to unusual scenarios and mass-casualty incidents makes $135,053 while a counterpart on the fire side makes $235,000.

“The entire uniform service of FDNY’s EMS, from EMTs to Division Chiefs, along with many firefighters are standing up to say, enough is enough,” Kathleen Knuth, president of the FDNY EMS Superior Officers Association, said in a statement. “The time has come to end this indignity.”