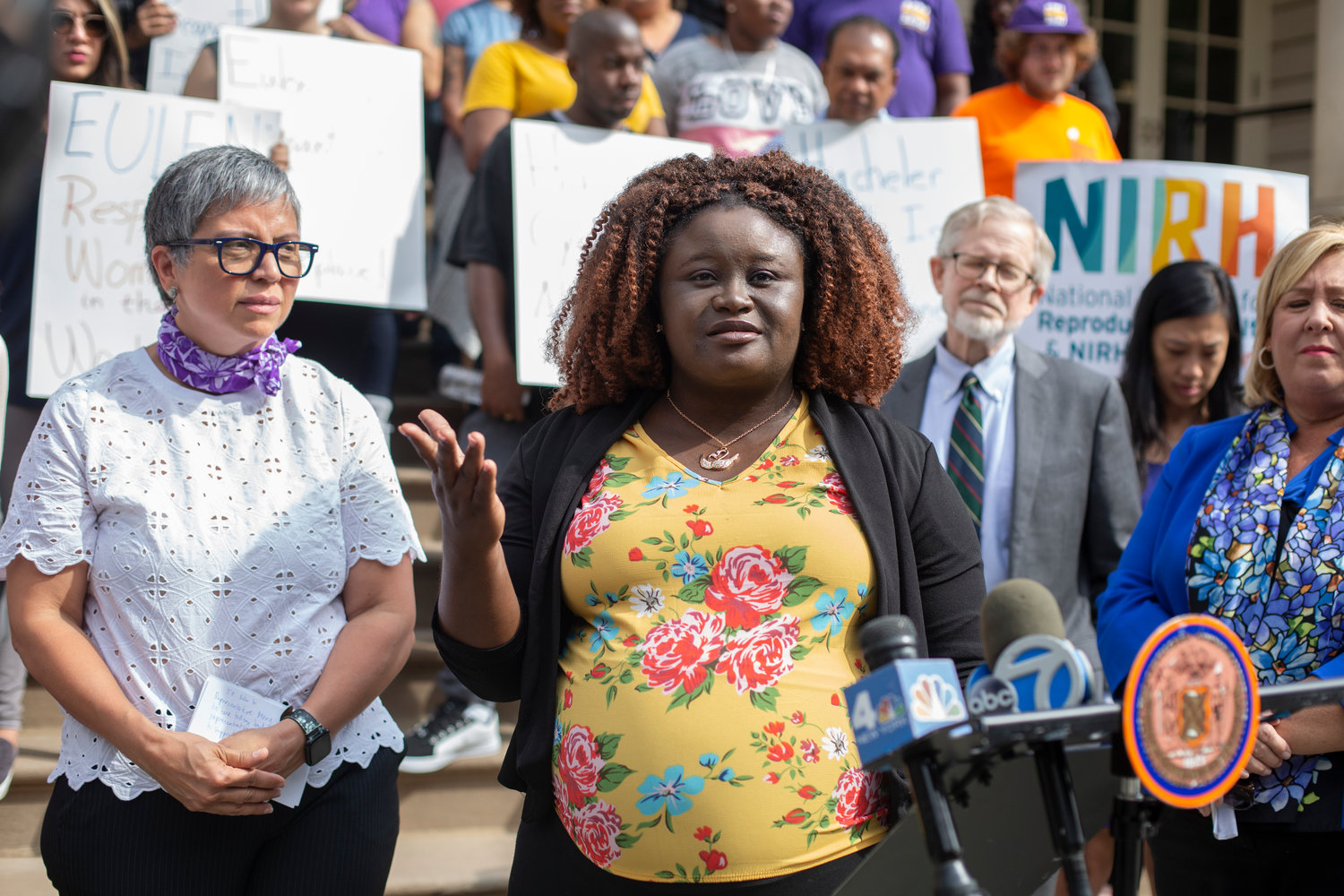 Advocates rallied at City Hall in 2019 in support of Hacheler Cyrille, pictured, who filed a pregnancy discrimination lawsuit against her employer. Organizations advocating for workers' and women's rights called for the passage of legislation that would make it illegal for employers to deny reasonable accommodations for pregnant workers, outside of Senator Chuck Schumer's Midtown office July 13.
John McCarten/The City Council
Posted Friday, July 15, 2022 6:15 pm
BY CRYSTAL LEWIS

“Women are terrified to request accommodations [on the job] like a seat or to be temporarily reassigned to a role supportive for a healthy pregnancy. This is no way to live,” said Odessa Fynn, a midwife and director of clinical operations at NYC Health + Hospitals/Woodhull Hospital’s Women’s Health Pavilion.

Advocate groups including the National Organization for Women-NYC, the New York Civil Liberties Union and the March of Dimes rallied July 13 outside of Senator Chuck Schumer’s Midtown Manhattan office to demand federal protections for pregnant workers seeking reasonable accommodations on the job.

Although 30 states and Washington D.C. have laws in place granting pregnant workers with the right to accommodations in the workplace, there is no such law at the federal level, according to the National Women’s Law Center.

The Pregnant Workers Fairness Act, introduced by U.S. Representative Jerry Nadler in February 2021, would protect pregnant workers from discrimination by requiring that employers provide reasonable accommodations to pregnant employees or workers who have recently given birth. If enacted, the law would make it illegal for an employer to deny a pregnant employee an accommodation unless the request would impose an “undue hardship” on the business, and would also make it illegal to fire a worker requesting or using accommodations.

Elizabeth Gedmark, ABB’s vice president, said that the most common requests for accommodation made by pregnant and postpartum workers are access to water, bathroom breaks, light duty and a space to pump breast milk.

“It makes a real difference in people’s lives to have clear laws in place,” she said during a recent phone interview. “I’ve been at A Better Balance for over 10 years and have heard from hundreds of women who have been [denied accommodation requests]. Honestly, it keeps me up at night.”

Schumer has backed the bill, which has bipartisan support and passed in the House but has not been voted upon in the Senate.

“Senator Schumer is strongly supportive of this legislation to protect pregnant workers and is seeking to pass it as soon as possible,” spokesperson Angelo Roefaro said.

Forced to choose between jobs and baby

The majority of workplace accommodations — 56 percent — cost nothing to the employer, while those that did have associated expenses averaged $500, according to a survey by the Job Accommodation Network. But two-thirds of workers needing accommodations due to pregnancy have lost their cases in federal court, according to ABB.

“How can we stand for the fact that women are still choosing between putting food on the table and a healthy pregnancy?” Bakst asked.

About two-thirds of women worked during pregnancy in recent years, according to the U.S. Census Bureau. Despite this fact, “there are too many insurmountable obstacles” for pregnant employees to continue working, said Donna Lieberman, executive director of the New York Civil Liberties Union.

“Far too many women, especially those in male-dominated jobs, low wage workers and women of color, continue to be marginalized at work just because they became pregnant and asked for a reasonable accommodation,” she noted.

Even in states that do have pregnant worker fairness laws in place, challenges remain. In November 2020, the Metropolitan Transportation Authority and Transport Workers Union Local 100 created four announcer positions for pregnant employees seeking lighter duties after train conductor Jillian Williams, who was awaiting an accommodation, gave birth prematurely in a Brooklyn rail yard to a baby that died shortly afterward. And in many states, such laws only apply to public workers, including in Arizona and Georgia.

Many advocates noted that between the formula shortage, the Supreme Court’s decision to overturn Roe v. Wade and the ongoing pandemic, women and mothers are fed up.

“The U.S. Senate has a clear and immediate moral obligation to pass needed legislation that protects pregnant workers against injustice and discrimination,” said Sonia Ossorio, president of NOW-NYC. “The hypocrisy if we do not do this is not lost on anyone — we have just lost the federal right to abortion.”

Mediation on deck for ferry workers

Educators in vax scam will return to payroll 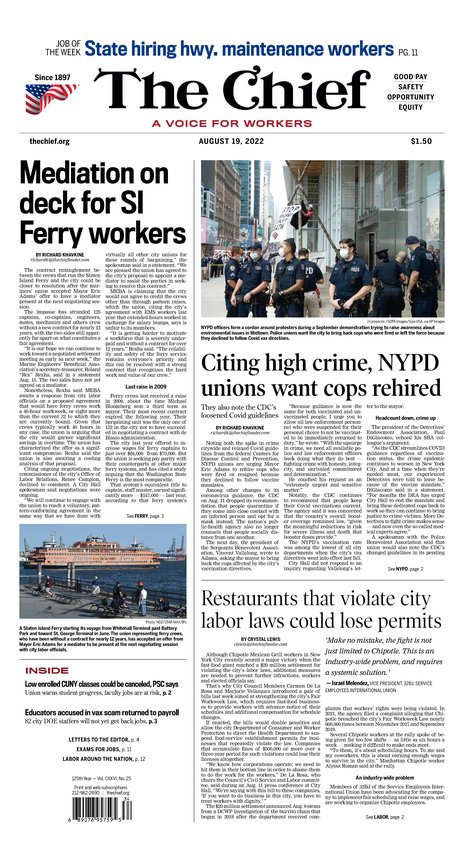 Mediation on deck for ferry workers

Educators in vax scam will return to payroll FREE