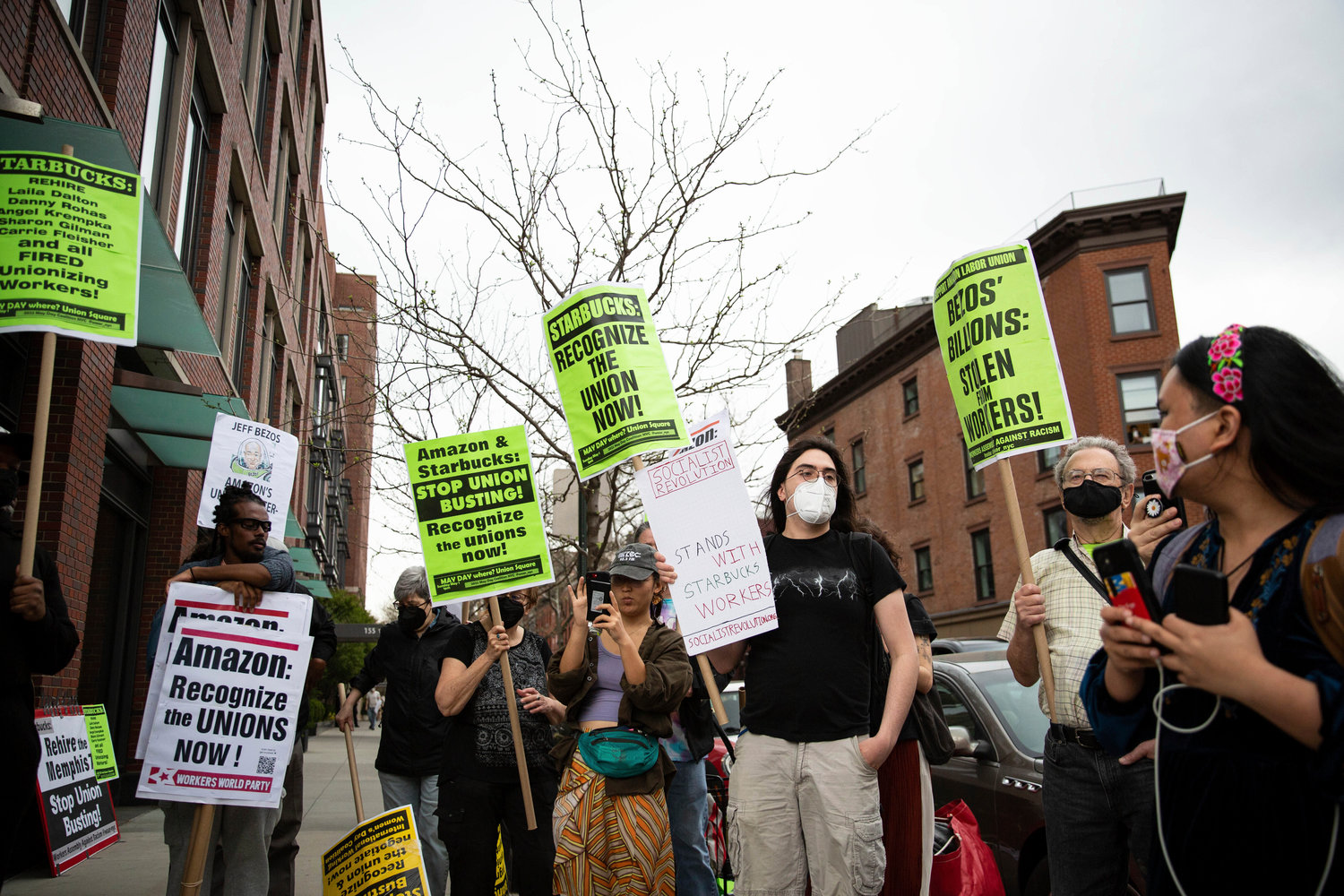 A coalition of labor-rights groups rallied in front of Starbucks CEO Howard Schultz's penthouse on West 11th Street in New York City in April. Organizers and workers at Starbucks stores accuse the corporation of hypocrisy given its carefully cultivated image as an employee-friendly company even as top officials, most notably Schultz, remain vehemently anti-union.
Karla Ann Cote/NurPhoto via AP
Posted Friday, September 16, 2022 8:12 pm
BY CRYSTAL LEWIS

“It definitely is a frustrating aspect of our jobs — that Starbucks is marketing themselves as being an ethical company while we’re being pretty ruthlessly exploited,” said Jacob Welsh, a shift supervisor and union organizer at the Bloomfield Starbucks in Pittsburgh.

More than 230 Starbucks locations have unionized since workers at a Buffalo store, in a historic first, won their election last December; the Bloomfield location won its election last April.

“We started talking about unionizing immediately when Buffalo filed, but it was almost jokingly,” Welsh said during a recent phone interview. “But then it got really real when Buffalo won.”

High-profile organizing campaigns at Amazon warehouses and Starbucks locations across the country have revitalized the labor movement. For workers organizing at these behemoth companies, it has been an uphill battle: Amazon unsuccessfully attempted to overturn the results of the election for its JFK8 facility on Staten Island and has yet to negotiate a contract.

Last month, Starbucks asked the National Labor Relations Board to temporarily suspend elections at all of its stores. The NLRB has filed more than 20 complaints against Starbucks — which include allegations that the company withheld raises for unionized stores — while New York City filed a lawsuit accusing Starbucks of illegally firing a union organizer at a store in Queens. Starbucks did not return a request for comment.

'Customers are on our side'

Yet while companies like Amazon and Starbucks remain intent on thwarting unionizing efforts, support for labor unions is at its highest since 1965, according to Gallup’s annual Work and Education survey.

“I think a part of our strategy is to leverage public support for unions,” Welsh said. “I think it’s important that Starbucks knows that customers are on our side.”

Maeg Yosef, an organizer at the Hadley, Massachusetts, Trader Joe’s, the first to successfully unionize, said that after workers began organizing, management subjected them to captive-audience meetings and told the employees they couldn’t wear pro-union buttons.

Considering the grocery chain has a reputation for being amiable and progressive, “there’s definitely been a huge disconnect between what they’ve said publicly and how they’ve behaved. I’m hoping that customers will understand that their actions aren’t progressive,” Yosef said by phone last week.

Charles Lindsey, an associate professor of marketing at the University at Buffalo’s School of Management, noted that for a “fairly significant” portion of consumers, the values a business espouses — whether social, environmental or even regarding their own labor force — do impact customers’ decision-making when it comes to making purchases.

“I think it does matter, especially for younger folks,” he said.

This summer, more than 70 influencers on TikTok who have a total of 51 million followers boycotted Amazon, and urged the company to improve working conditions as part of the “People Over Prime” pledge.

“I think we’re going to see more of that over the next three-to-five years, when there are multiple options out there and consumers have an opportunity to vote with their dollars,” Lindsey said.

But Welsh and Yosef both are against asking customers to boycott.

“A personal boycott, I think, doesn’t do very much: it’s a drop in the bucket for Starbucks’ profit,” Welsh said.

“People often ask if they should stop shopping or boycott and … I don’t think that should be put on the consumer,” said Yosef, who has worked at Trader Joe’s for 18 years. “Telling people ‘Never shop at Amazon’ when a product at Amazon is the most affordable option, I think it takes away from the bigger picture.”

Welsh believes the best way for customers to back unionizing workers is to be vocal on social media, to show up to union events, and to shop in unionized stores. “If these union stores start doing bad, the company has an excuse to shut them down,” he said.

Trader Joe’s has come under fire for suddenly shuttering its wine shop in Union Square just as employees were set to file for a union election, while in the past few months Starbucks has closed 19 stores — 42 percent of which were organizing, according to Starbucks Workers United.

Yosef also suggested that customers can donate to the GoFundMe pages of union campaigns and tell managers, in person, that they can’t wait for stores to unionize. “We’ve had people come in and talk about their union. It’s been really exciting to have that support,” she said.

For Starbucks, which has projected itself as employee-friendly and focused on sustainability, “their public image is very important to them,” Welsh said.

Recalling a 2018 incident at a Philadelphia location, when a manager called police on two black customers when they refused to leave after being told they could not use the store’s restroom, he said, “consumers were so outraged by it, they essentially forced Starbucks to take a day to close their stores for anti-bias training,” he noted.

Lindsey, the marketing professor, said that although there was no indication that businesses that have discouraged their employees from unionizing have seen any loss in profits, “companies are feeling the pressure” of union campaigns.

“Even failed unionization attempts are causing companies to improve their working conditions and raise pay: but certainly not to the extent a union would,” he said, noting that Apple recently raised the starting pay for its retail store employees by $2 after workers began organizing.

Welsh said that after Starbucks also raised the starting pay for baristas at the Bloomfield store from $12 an hour once workers began union talks. The minimum wage in Pennsylvania is $7.25 an hour.

“I hope that [Starbucks] will just accept the fact that we’re here and we’re staying,” he said. “In order to maintain their image, that they’re not Dunkin’ Donuts; that they’re ethical, they need to start treating workers with respect.”