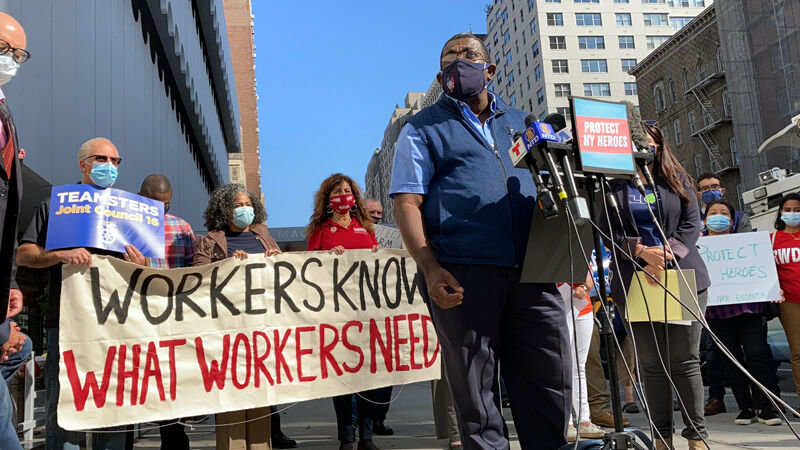 MADE KEY GAINS, AND LOOKING FOR MORE: The successful strike by Hunts Point Produce Market workers benefited from the support of a coalition of unions, community activists and elected officials that is pressing for the enactment by the state of the NY HERO Act, which would give private-sector essential workers the same kind of health-and-safety-related protections tied to the coronavirus that are standard for public-sector employees.

Photo courtesy of the Alliance for a Greater NY
Posted Thursday, January 28, 2021 12:00 pm
By BOB HENNELLY

Union activists are citing a successful week-long strike by 1,400 workers at the Hunts Point Terminal Produce Market in the Bronx as proof that a year into the coronavirus pandemic, essential workers now have a stronger hand in negotiations.

Members of Teamster Local 202 Jan. 23 overwhelmingly ratified a contract offer that will give them a $1.85-an-hour wage increase over the next three years, as well as a 40-cent hourly boost in management's health benefit contributions and 35 cents more per hour toward the union's health-and-welfare fund, which covers matters such as prescription drugs.

Offered Half of Final Hike

According to union sources, the strike was triggered Jan. 16 after the 30 produce merchants who employ Local 202 members offered just a 92-cent hourly raise for workers who were making $30,000-$40,000 a year.

Over the next seven days, workers were joined by colleagues from the United Federation of Teachers, Transport Workers Union Local 100 and Communications Workers of America, community members and elected officials including U.S. Rep. Alexandria Ocasio-Cortez, who skipped President Biden's inauguration to pass out hot chocolate on the picket line.

"Some of us can get a little bit of safe harbor by working from home or telecommuting. These folks cannot do that," Teamster Local 202 President Danny Kane told the Capital Gazette. "The help from the community groups and the politicians and other people put us on good footing to get to the bargaining table and bargain a fair and open deal."

"This was an awesome win for labor," said Council Member Daneek Miller, who chairs the Civil Service and Labor Committee. "It was this workforce at the city's most vulnerable time that put so much at risk to provide the community with fresh food and produce."

The arrest also got the attention of the New York congressional delegation. Ms. Ocasio-cortez was joined by Ritchie Torres, Nydia Velazquez, Jamaal Bowman, Adriano Espaillat, Yvette Clarke, Hakeem Jeffries, Grace Meng, Carolyn Maloney and Jerry Nadler in writing to the U.S. Department of Labor and the National Labor Relations Board seeking their intervention in the dispute.

"It was exciting to hear they finally came out with a good agreement and contract," said Maritza Silva-Farrell, the executive director of Alliance for a Greater New York, a coalition of dozens of unions, community and immigrant rights groups. "But it's devastating to think it became necessary for them to have to strike when we consider they have been doing this essential work on the ground exposing themselves and their families during this deadly pandemic."

Her coalition is working closely with the State AFL-CIO to win passage of the New York Hero Act, which would extend to essential workers in the private sector, regardless of their immigration status, the kind of workplace COVID protections that have become standard for public employees.

"Right now, unlike public-sector workers who have protections, there are no statutory protocols for private-sector workers in terms of how to respond to infectious diseases," State AFL-CIO President Mario Cilento said in a statement. "The NY HERO Act will serve as a necessary template to ensure the safety, health and well-being of everyday working heroes now and into the future."