Not Enough Cops In Subway? TWU, MTA Say City Out of Touch 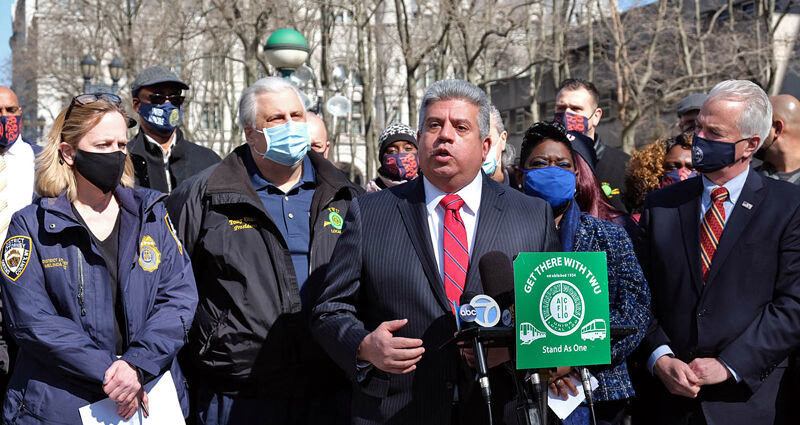 SPITTING IN THE WIND?: Early last month, Transport Workers Union Local 100 enlisted the support of all five of the city's District Attorneys for upgrading penalties for spitting on transit workers, but the bill has yet to move in Albany and both the union and city transit officials say NYPD statistics showing crime has stabilized in the subways fail to reflect harassment incidents and the fear they have created among both employees and riders.

For months, Transport Workers Union Local 100 has been complaining about Bus Operators and subway personnel being assaulted, spat upon or harassed by individuals who appeared to be emotionally disturbed and homeless.

After a Feb. 12 stabbing spree on the A train left two homeless people dead and two others seriously wounded, the de Blasio administration added nearly 600 Police Officers to subway patrols.

A spate of other less-lethal attacks, including cases in which riders were pushed onto subway tracks, continued to dominate the news, yet the Mayor insisted at his daily press briefings they were not a symptom of deteriorating street or subway conditions.

New York City Transit President Sarah Feinberg late last month said she'd like to see cops on all subway platforms, which the Daily News subsequently reported would require 6,000 officers, or "more cops in the subway than there are U.S. troops in Afghanistan and Iraq."

The NYPD's Transit Bureau has 2,500 officers and the Metropolitan Transportation Authority Police numbers a bit more than 1,000, after recently adding 500 to its ranks.

MTA officials cited a recent survey of 25,000 New Yorkers in which 75 percent of them said they were concerned about subway crime and harassment incidents.

At the April 21 MTA monthly board meeting, NYPD Chief of Transit Kathleen O'Reilly dismissed the agency's concerns about crime as "fear-mongering."

"It's a disservice to New Yorkers to invent a narrative that crime is soaring in the subways when it's simply not the case," she told the MTA board, adding that "as daily ridership heads into the millions once again, we are confident we have the necessary number of officers deployed to keep riders safe."

Ms. Feinberg countered "that no one is saying that crime is rampant...what we are saying is we have a huge number of customers that are worried about it and that the crime rate shouldn't be what it is...given how low ridership is."

She said "the next three to six months" was critical to winning back the system's pre-pandemic ridership.

According to TWU Local 100, the MTA's data on assaults against subway workers has been flat comparing this year's first three months to the first quarter of 2020. "You would think that with millions of fewer riders, those assaults on our members wouldn't just be flat but actually down, but they are not," Local 100 spokesman Pete Donohue said during an April 22 phone interview.

Ms. O'Reilly told MTA board members that subway crime was down 53 percent this year and continued to drop even as more riders came back to the system. She said felonies like robberies and grand larcenies were down by double digits.

In the press briefing that followed the public hearing, MTA CEO Patrick Foye echoed Ms. Feinberg's concerns about the need for more police in the subways, saying the crisis was real rather than a "perception problem" created by news coverage of some crimes.

"If you ride the subways, as we all do, and you go to Penn Station and you go to other stations, harassment is a real issue," he told reporters.

MTA Train Conductor Terence Towler, who was attacked by an emotionally disturbed person Feb. 7, said the NYPD's subway-crime index didn't reflect the experiences of both employees and riders.

He was grabbed around the head and poked in the eye by a male assailant while he was trying to close the doors to his train.

"It wasn't so much fear as it was the anger that I was affected by," he said. "It was a moment where, like all New Yorkers, we stand up for ourselves, but at that moment I had to really hold my composure so as to not do something I would regret. Even talking about it has me going through it all over again."

Mr. Towler has yet to return to work and said that assaults on workers "happen a lot more" than the statistics suggest.

"Why is it that when I go to file the police report, I find out this is not even considered an assault—it is considered harassment?" he asked.

On March 3, after a vigorous organizing effort by Local 100, the city's five District Attorneys backed legislation that would upgrade the charges for spitting on a transit worker from being just a violation to a misdemeanor, that could result in jail time for those convicted.

Since 2019, there have been approximately 200 spitting attacks annually against transit workers. That offense has posed a particular danger over the past year, with the coronavirus so far having killed over 150 MTA employees, the great majority of them Local 100 members.

The union was joined April 26 by leaders of the State AFL-CIO, the AFL-CIO New York City Central Labor Council, District Council 37 and the Retail, Whole and Department Store Union in urging increases in cops and mental-health workers in the subways.