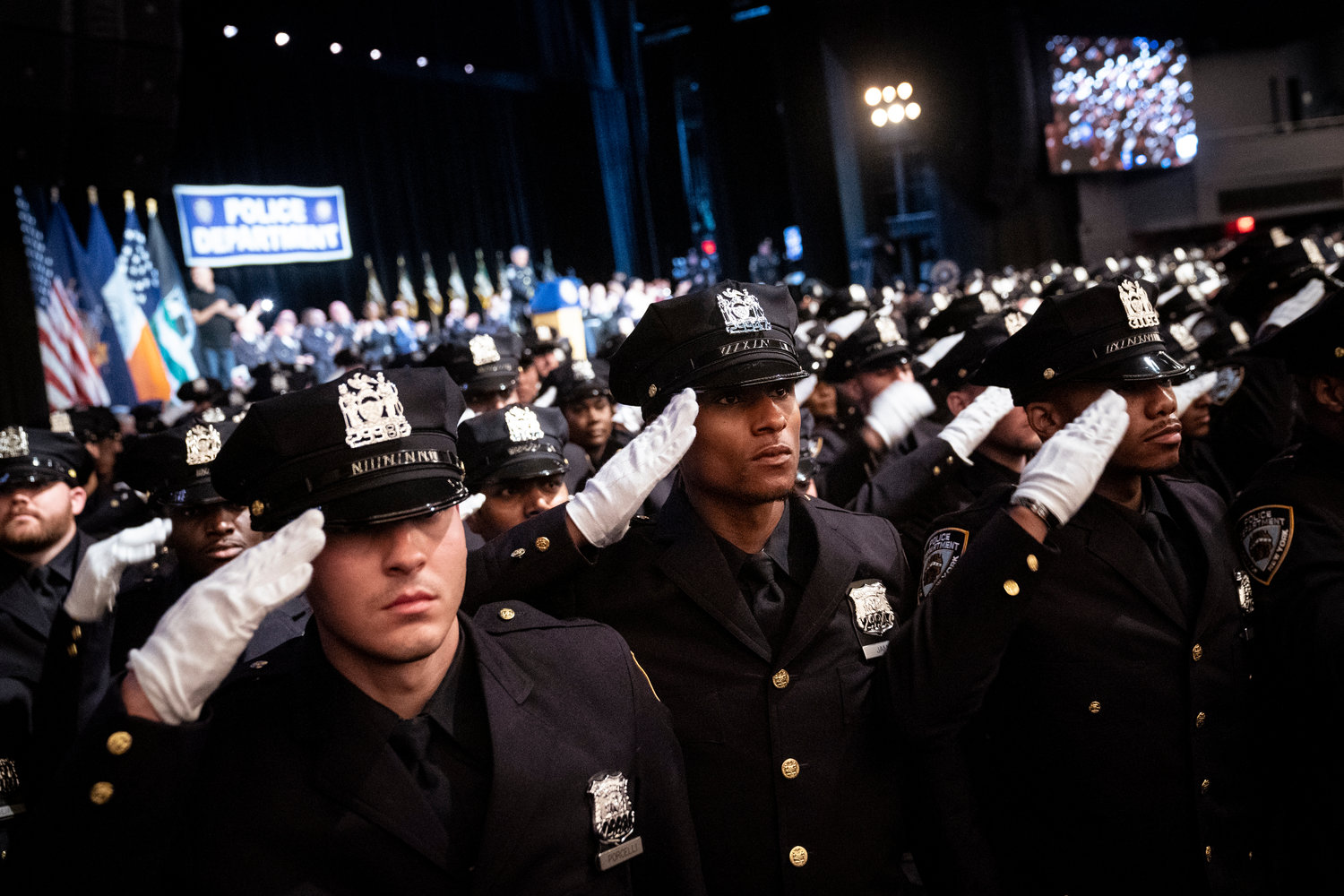 NYPD Police Academy graduates salute their families and friends during their graduation ceremony at Madison Square Garden July 1. The number of NYPD officers is at its lowest, by average headcount, in more than a decade. Police unions are urging Mayor Eric Adams to bring back those cops who were fired or left the force because of the city’s Covid vaccination mandates.
John Minchillo/AP Photo
Posted Monday, August 15, 2022 10:55 pm
BY RICHARD KHAVKINE

Noting both the spike in crime citywide and relaxed Covid guidelines from the federal Centers for Disease Control and Prevention, NYPD unions are urging Mayor Eric Adams to rehire cops who were fired or resigned because they declined to follow vaccine mandates.

Among other changes to its coronavirus guidance, the CDC on Aug. 11 dropped its recommendation that people quarantine if they come into close contact with an infected person and opt for a mask instead. The nation’s public-health agency also no longer counsels that people socially distance themselves from one another.

The next day, the president of the Sergeants Benevolent Association, Vincent Vallelong, wrote to Adams, asking the mayor to bring back the cops affected by the city’s vaccination directives.

“Because guidance is now the same for both vaccinated and unvaccinated people, I urge you to allow all law enforcement personnel who were suspended for their personal choice to not be vaccinated to be immediately returned to duty,” he wrote. “With the upsurge in crime, we need all available police and law enforcement officers back doing what they do best — fighting crime with honesty, integrity, and unrivaled commitment and determination.”

He couched his request as an “extremely urgent and sensitive matter.”

Notably, the CDC continues to recommend that people keep their Covid vaccinations current. The agency said it was concerned that the country’s overall booster coverage remained low, “given the meaningful reductions in risk for severe illness and death that booster doses provide.”

The NYPD’s vaccination rate was among the lowest of all city departments when the city’s vax directives went into effect last fall.

City Hall did not respond to an inquiry regarding Vallelong’s letter to the mayor.

Headcount down, crime up

“As the CDC streamlines COVID guidance regardless of vaccination status, the crime epidemic continues to worsen in New York City. And at a time when they’re needed most, our experienced Detectives were told to leave because of the vaccine mandate,” DiGiacomo said in a statement. “For months the DEA has urged City Hall to end the mandate and bring these dedicated cops back to work so they can continue to bring justice to crime victims. More Detectives to fight crime makes sense — and now even the so-called medical experts agree.”

A spokesman with the Police Benevolent Association said that union would also note the CDC’s changed guidelines in its pending lawsuit against the city. That suit, filed last October, argues that the city’s vaccine mandates were overbroad and unnecessarily coercive.

The NYPD counted 34,422 officers as of about a month ago, its lowest number, by average headcount, in more than a decade, with resignations, as opposed to retirements, reaching record rates. Cops cite numerous reasons for their departures, among them increasingly liberal criminal-justice reforms and lack of support from the public and elected officials, but also the city’s vaccination mandates.

As cops leave the force, crime continues to increase. While murders and shootings were down 8 percent and 10 percent, respectively, year over year through Aug. 7, overall crime citywide was up 36 percent.

Grand larcenies, by 48 percent; auto theft, by 42 percent; robberies, by 40 percent; burglaries, by 32 percent; felony assaults, by 20 percent; and rapes by 11 percent, have all climbed so far this year.

In a note to his members that included his letter to the mayor, the SBA’s Vallelong said that with crime surging, “Now is not the time to dwell on past practices of decisions.

“The city cannot afford to wait what would take years to train people with more experience than those that were forced to make hard personal and professional choices.”