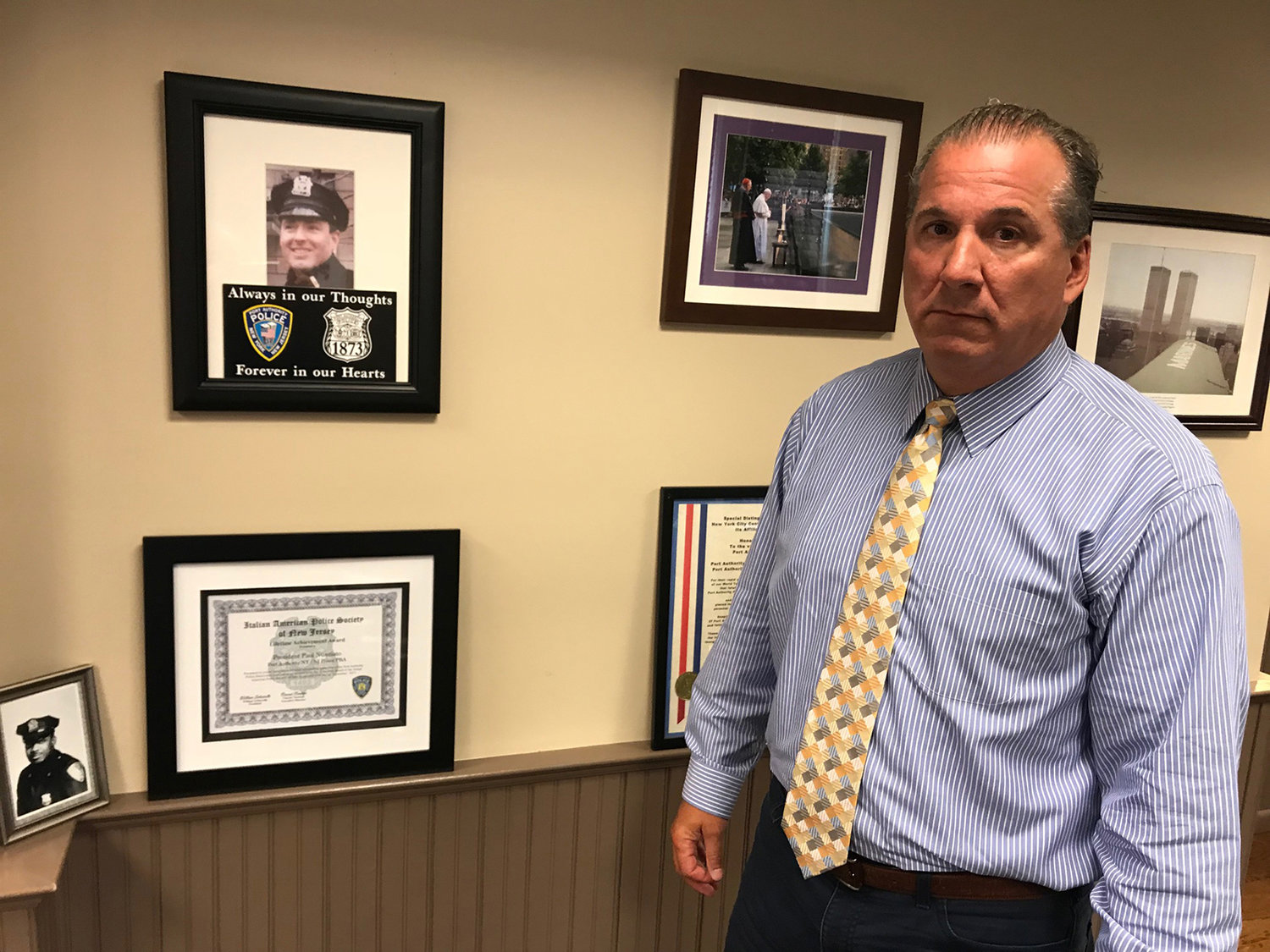 RECALLING ‘WORST DAY OF MY LIFE’: Paul Nunziato, who for the past eight years has been president of the Port Authority Police Benevolent Association, was one of 35 PA cops who ‘jumped on a bus we commandeered from Jersey City’ to rush into Manhattan on the morning of Sept. 11, 2001 after two planes were guided by terrorists into the Twin Towers of the World Trade Center, only to arrive there just in time that ‘we saw the North Tower fall.’ 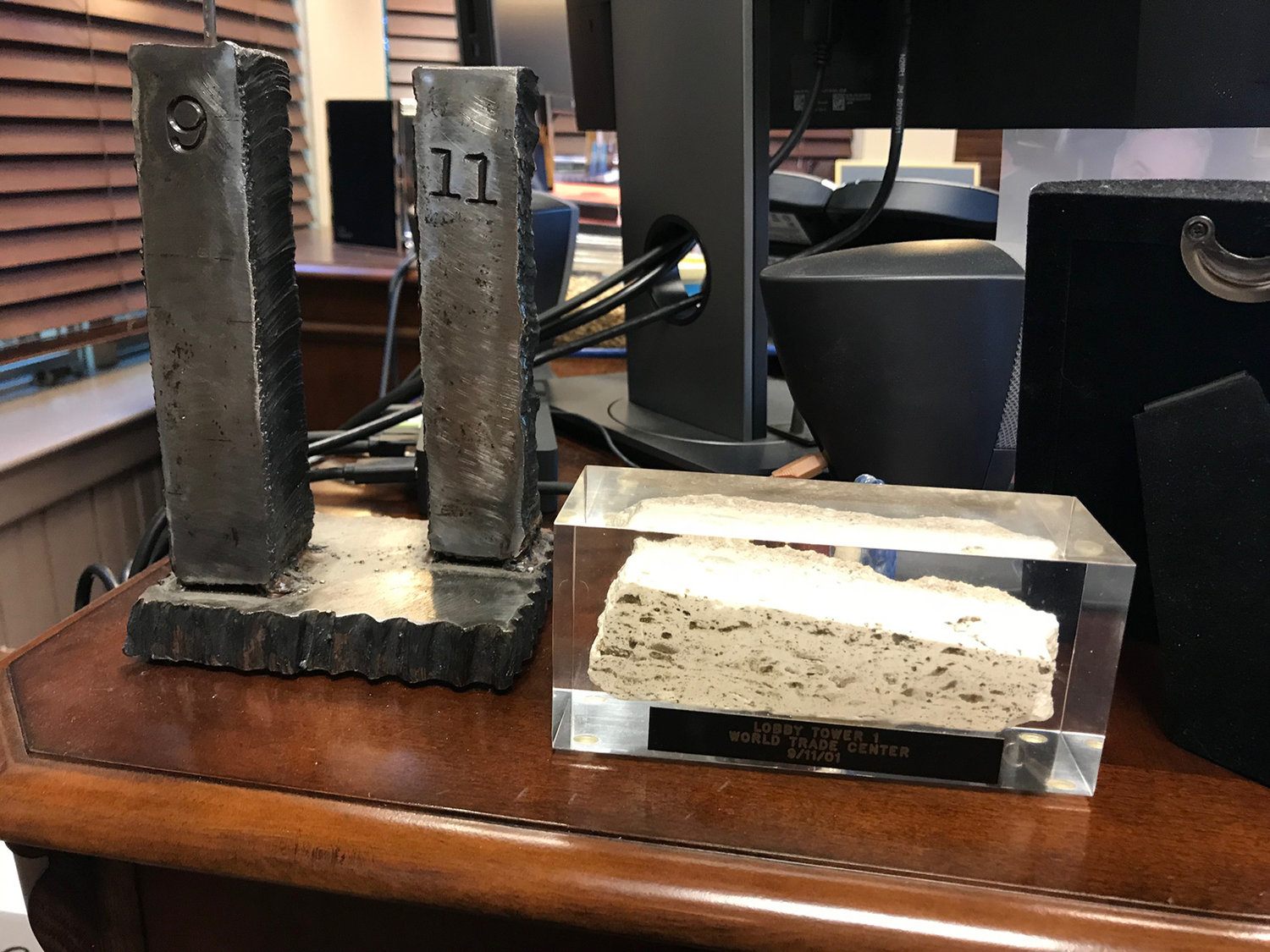 REMINDERS OF THE TRAGEDY: On Paul Nunziato’s desk sit a model of the towers sculpted from steel recovered from the wreckage of the World Trade Center and a plastic box containing a section of the marble floor from the lobby of Tower 1. The president of the PAPD union hardly needs the reminders; 17 years later, he is still dealing with the fallout from ‘the single worst day in the history of law enforcement in the United States.’

Port Authority Police Officer Paul Nunziato was assigned to patrol the PATH trains when planes hijacked by Muslim terrorists hit the World Trade Center on the morning of Sept. 11, 2001.

“We didn’t have time to put on uniforms,” he said during a recent interview in his office at the Port Authority Police Benevolent Association, where he has been president since 2010. “We were in jeans. Thirty-five of us jumped on a bus we commandeered from Jersey City.”

‘We Saw the Tower Fall’

“It was the worst day of my life,” he continued. “As we got down there on the bus, we saw the North Tower fall. We saw the smoke go up.”

The officers mustered at Borough of Manhattan Community College, where they were each given a breathing apparatus known as the Scott Air-Pak and other gear. Then they returned to the collapsed towers. “It was like walking through a blizzard, ashes and debris everywhere,” he said. “We tried to make entry at several different spots. We couldn’t get in anywhere.”

The PA officers regrouped in a gym at the college. “We asked for a radio check,” he said. “Most of the officers didn’t respond.”

The PAPD, which then had about 1,300 officers, lost 37 of them that day, including 13 from the PATH precinct.

That was about 3 percent of the department. By comparison, the Fire Department lost 343 uniformed members, about 5 percent of its complement of 7,000. The NYPD, which had about 40,000 officers at the time, lost 23. The total death toll from the attack was 2,996.

“That was the single worst day in the history of law enforcement in the United States,” Mr. Nunziato said.

Among the casualties was his partner, Officer Donald J. McIntyre, who was killed in the collapse of the towers. Officer McIntyre had two children; a third, daughter Lauren, was born weeks after the attack.

“I had to call my partner’s wife that night because we didn’t even have enough cops to go out to the house to notify the wives,” he said.  “We had to send local police departments to tell people that their husbands are still missing.  It put a great strain on everyone.”

The attack was 17 years ago, but it’s still a constant presence for the union and the PAPD. Officers are still becoming ill and dying from diseases caused by exposure to wreckage from the site. Mr. Nunziato keeps in touch with several widows, including his partner’s, and hosts dinners for them every year on the anniversary of the tragedy. His office is filled with photos and relics from the attack and its aftermath. He recently saw the sons of two officers who died on 9/11 graduate from the PA Police Academy.

Mr. Nunziato and his colleagues spent 20 hours at the World Trade Center site on Sept. 11. He and others joined a rescue effort for PA Officer Will Jimeno and Sgt. John McLoughlin, who were trapped under the rubble for 13 and 20 hours, respectively.

“There was a line of police officers, firemen, I guess ironworkers and other people trying to help that extended probably five stories into the rubble,” Mr. Nunziato said. “I was at the top, and about 300 feet down was where Jimeno and McLoughlin were trapped. Our boots were melting from the heat…

“That whole line of hundreds of first-responders was handing fresh equipment up the line, primarily Scott Air-Paks, for them to continue. That went on for well into the night. At one point, they were telling people to get off the line. They were worried about the last piece of the tower…falling on the line. But everyone refused to move. We took our chances. There were two cops buried in there. I was up there 'til about 1 o’clock in the morning.”

Officer Jimeno and Sergeant McLoughlin were two of the last people to be pulled alive from the rubble. A 2006 movie directed by Oliver Stone, "World Trade Center," focused on their travails.

Mr. Nunziato’s day wasn’t over. Hoping to get into the wreckage of the World Trade Center from below, he and three other officers went to Jersey City and met up with that city’s ESU.

“We had a small aluminum boat that they gave us. We took it down into the PATH station, put in on the back of a train flat…They actually backed us into the tunnel at Exchange Place and down into the water…We made it within a couple hundred feet of actually getting into the World Trade Center Station, but the water kept rising and we went back to Exchange Place.”

After the attack, he said, officers worked 12-hour shifts with no days off from Sept. 12 to the end of October. Officers went to funerals during their 12 hours off, “and then we went back to work. And that continued day after day after day…”

“It devastated our department as far as any time off or being with your family,” he said. It was a year before normal scheduling was restored.

“It was just a very hard time to do your job, find your friends, recover people and bodies down there. It put a strain on everyone. We’re not any different from anyone else who suffered.”

The number of PA officers who worked on the pile during recovery efforts was limited by Joseph Morris, who became Chief of the PAPD after Chief James Romito was killed the day of the attack trying to rescue victims trapped in the debris.

He decided at the end of October to keep the same 30 to 40 officers assigned to the pile instead of rotating people in and out as the NYPD did, “which in hindsight as far as future loss of life due to cancers and other illnesses” limited the number of officers who were heavily exposed, Mr. Nunziato said.

Even so, he said, “several of my close friends have thyroid cancer now. In that sense, I consider myself lucky, so far, but that’s something that’s always on your mind.”

He goes to any available health screenings. He has had a polyp removed from his vocal cords, and he is mindful of “sleep apnea, deviated septums, all the other treats 9/11 brought first-responders…The lucky ones don’t have cancer, but everybody has something.”

After October 2001, he went back to patrol, “but every weekend I worked a 12-hour shift down at the site,” he said.

Contract ‘Out the Window’

When Mr. Nunziato testified before Congress on 9/11-related legislation, a Congressman asked him about working hours. “I have a guaranteed eight-hour shift in my contract,” he said. “I work four days on, two days off in my contract. After 9/11, I told him, my contract went out the window. You’d just suffered Pearl Harbor in the middle of Manhattan.”

PA officers travel to help out other departments that are similarly stretched by disaster. “We’re still trying to pay back all the people who came to help us” in the aftermath of the attack,” he said, referring to officers and others from around the country who arrived to reinforce local police at the site.

PA officers visited Dallas when an Army reservist killed five cops there in 2016. “We sent our truck down there,” he said. “We cooked for them. We talked to them.”  The department also responded to a similar shooting in Baton Rouge, La., at about the same time that killed three officers.

After Hurricane Katrina hit New Orleans in 2005, a delegation of officers delivered $225,000 to local cops who needed help afterwards. “We still go up to Boston every year for the Marathon” since the bombing at that event killed three people in 2013, Mr. Nunziato said.

“We take our payback seriously,” he said. “When it comes to devastation, the police community tries to rally around each other.”

One of the issues for Mr. Nunziato is making sure younger members of the department understand the sacrifices made. A newly-hired 23-year old officer was 6 years old on 9/11. Academy instructors “make sure every cop knows every Port Authority police officer who died in 9/11…Those guys are always on our mind.”

Sometimes, when he hears younger officers complaining, he says, “I know 37 guys who would love to be having your problems.”

The grief is always with him.

“I try to explain it to a lot of my widows,” Mr. Nunziato said. “If your husband is a police officer and he gets killed in a bank robbery or a shooting, it’s headline news for two weeks, then the support group starts. But you’ll never get closure from 9/11. It’s history. And it’s quite evident every year that as these families endure the months leading up to 9/11, with the documentaries, they never get their closure, they never get their healing process.

“The families of the other 3,000 people who got killed on 9/11 also go through this every year. I feel for those families, all of them. They’ll never have closure 'til they meet their loved one on the other side.”