Sleeping on the job, because he had to

A narcoleptic's fight with his brain’s natural instincts for seven years, and what it took from him 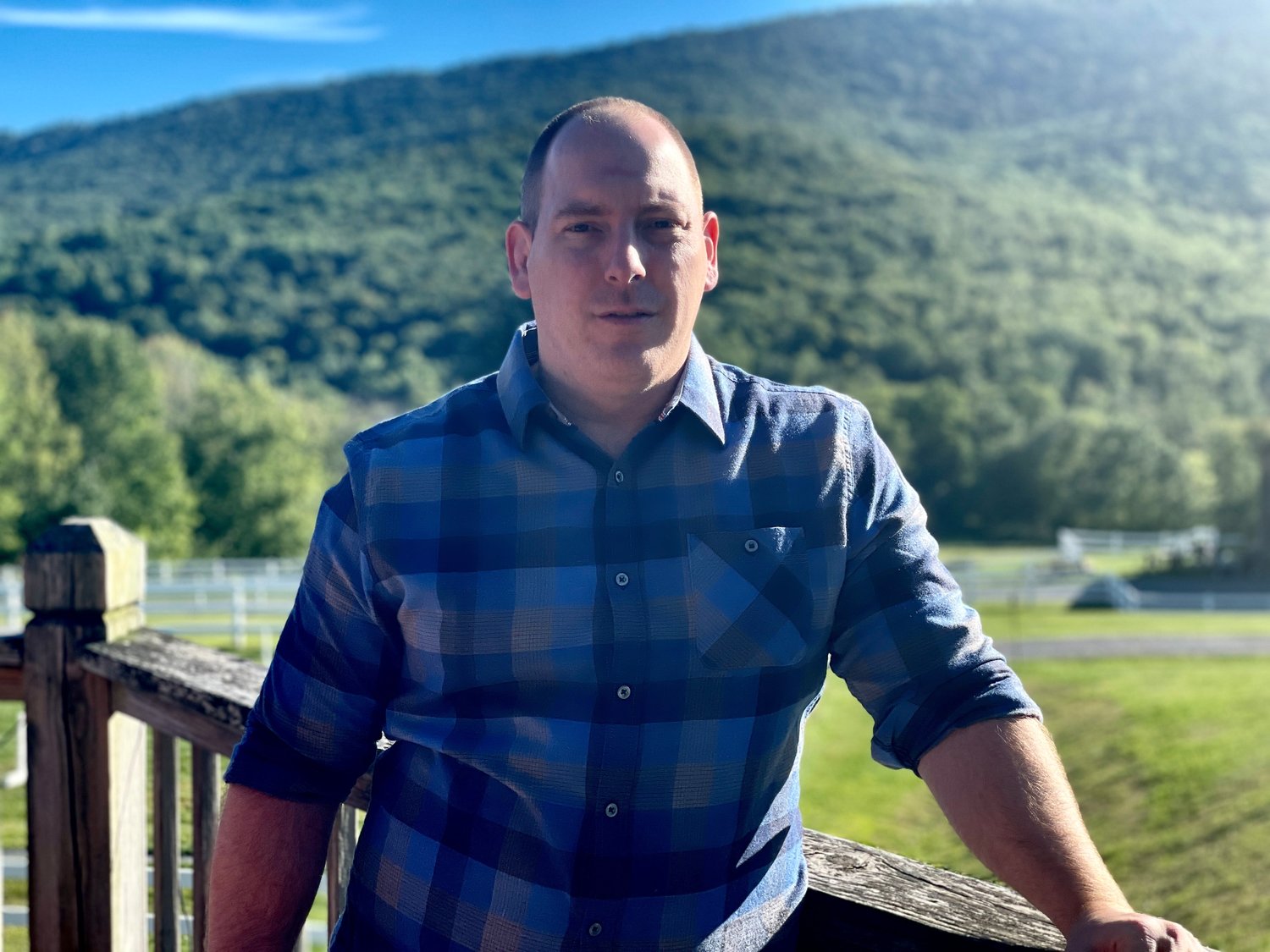 Grant Billingsley, pictured in Roxbury, New York, spends large chunks of every day appeasing his need to sleep, and sometimes finding places to doze off. Billingsley, 42, diagnosed with narcolepsy during his senior year of high school, said that the worst aspect about the disorder “is the time it steals away from you.”
Courtesy of Grant Billingsley
Posted Tuesday, September 20, 2022 11:11 am
BY LOUISE VALLEE

When the alarm rang, Grant Billingsley lifted his head from between his hands, pushed himself up from the cold floor tiles and returned to his desk. Waking up in the second-floor bathroom stall of The Geneva School of Manhattan, where he taught art, was a familiar sensation. For most, sleeping on the job is a workplace taboo. For Billingsley, it’s a medical necessity.

Billingsley is a thickset man from Plano, Texas, with short dark blond hair which he often tucks under a hat. With it, he looks younger than his 42 years. He wears T-shirts and jeans, and seems to get along with just about everyone.

During his senior year of high school he was diagnosed with narcolepsy. The chronic neurological disorder affects the brain’s ability to control sleep-wake cycles.

In people without sleep disorders, deep, rapid-eye movement (REM) sleep only occurs at night, typically 60 to 90 minutes after a person falls asleep. But in narcoleptic brains, “the boundaries between wakefulness and REM sleep are weak,” explains Thomas E. Scammell, a neurologist at Harvard Medical School. “So aspects of REM sleep can break through at other times of the day, and narcoleptics can transition from one to the other very quickly.”

According to Narcolepsy Networks, about one in 2,000 people in the United States is affected, although it is believed that only a small proportion of those living with the disorder are actually diagnosed.

Billingsley spends a large part of each day appeasing his unpredictable sleep needs, and finding safe spots to doze off. “The worst thing about narcolepsy is the time it steals away from you,” he says. He’s learned to live with the condition : he plans his naps as thoroughly as his social and work obligations; avoids driving more than 25 minutes at a time; reads mostly short stories; and has an iron-clad morning routine. Still, after seven years of working full-time as a facility manager and an art teacher, Billingsley had to quit four months ago. “I was burned out,” he says.

Anyone with a sleeping disorder, such as light stress-induced insomnia and sleep apnea, knows how much it can disrupt a work day. A study published in Sleep Health, the journal of the National Sleep Foundation, found that a poor night’s sleep can lead to more stress and distracting thoughts, affecting the next workday’s productivity.

Billingsley’s agitated sleep certainly could. He struggles so much to find sleep that he has “teams” of pillows he flips around to get through the night: the squishy one atop the memory foam, both up against the wall, the old one cradled in his arms. Flat sheets are a long-gone practice; they always end up in a bundle on the floor.

But when he worked at the school, Billingsley’s brain wasn’t just making up for sleep deprivation. The commute was a struggle; he’s woken up more times than he can count after passing his stop on the subway. Any time spent static at his desk or while working on his computer was also difficult. He tried to stay on his feet as much as possible, and kept Goldfish crackers on his desk to munch his brain away from sleep.

Even workplace banter was affected. Strong emotions, like surprise laughter, can cause cataplexy, a sudden loss of muscle tone, which for Billingsley means his muscles freeze momentarily, “like a light switch,” he says. It happens to him less than it used to, but he’s kept defensive habits: when he tells a joke, he stops walking and swallows.

Lauren Weber, who worked at the desk next to him for three years, knew his tell-tale signs. “He would start to bat his eyes a lot, get stuck on an email, or slowly nod off on his chair,” she says. Often, he scheduled 15-minute naps to prevent that. Sometimes, if he was pushing himself, Weber would ask if he needed to “go hide.”

But the disorder never affected the quality of his work, his colleagues said. “He would stay late at night to make sure he finished his tasks,” said Tessa Tiemann, principal of the elementary school where he taught. “He was doing the job of two people,” added Steven Puppo, the operations assistant. What it did affect was everything else.

“I was lucky, everyone was very supportive,” Billingsley says. In fact, he is always saying how fortunate he is. Fortunate that he’s a big 200-pound guy who doesn’t worry what might happen if he falls asleep on the subway. Fortunate that his parents believed he wasn’t just a lazy teenager and he got diagnosed early. Fortunate that his employers understood what it took for him to get through a day shift, and never thought the naps meant he was slacking off.

None of the drugs he was prescribed over the years worked for him. The upsides of Xyrem, a prescription medicine that treats cataplexy and excessive sleepiness, were not worth the two nightly alarms to take what tastes like very salty water; Ritalin hurt his stomach; Adderall caused dry mouth; Nuvigil, which also treats sleepiness, proved effective, but only for a week.

For now, Billingsley’s stopped taking medication. Still, he says that if he had a million dollars to donate to science, he wouldn’t give it to narcolepsy research. “It’s manageable.”

For a long time, Billingsley’s sister, Susan Carlisle, didn’t realize how emotionally draining this condition was, and how much of his daily life was “an uphill battle.” Carlisle, 40, is two years younger, but speaks about him with the caring tone of a big sister.

“He just has fewer hours in the day than the rest of us, and he is tired all the time,” she says. “Grant always minimizes the impact it has on him.” But between fighting sleep deprivation and making sure he has time to recover, “what often ends up getting cut is the fun stuff,” she says.

Among the fun stuff: home-cooked meals, live music nights and his art. At the end of a work day, Billingsley often stuffs food in his mouth to stay awake. “When you’re tired and foggy-brained, you don’t make gourmet stuff, but PB&J takes five minutes.” Although he hasn’t stepped on a scale in a while, Billingsley estimates that he’s put on almost 50 pounds since moving to New York.

He could not enjoy much of New York’s music scene, because, he says, “if I go to a concert, I know I won’t be functioning the next day.” But mostly, when Billingsley moved to New York in 2015, after getting a master’s degree in fine arts from Texas Tech University and an art residency in New Mexico, he hoped to spend more time working on his digital art, and get some exposure.

Instead, almost all his waking hours were on the job. It has been four months since Billingsley quit his job and moved back to Texas. As he looks for a new job, he keeps thinking about “that moment when it’s 4:45,” the exhaustion from the workday, the necessary nap in the parking lot when all he wants to do is go home, pulling over once more on the way, getting home, and then going straight to sleep, only to start all over the next day: “The idea of putting my body through that again is terrifying.”