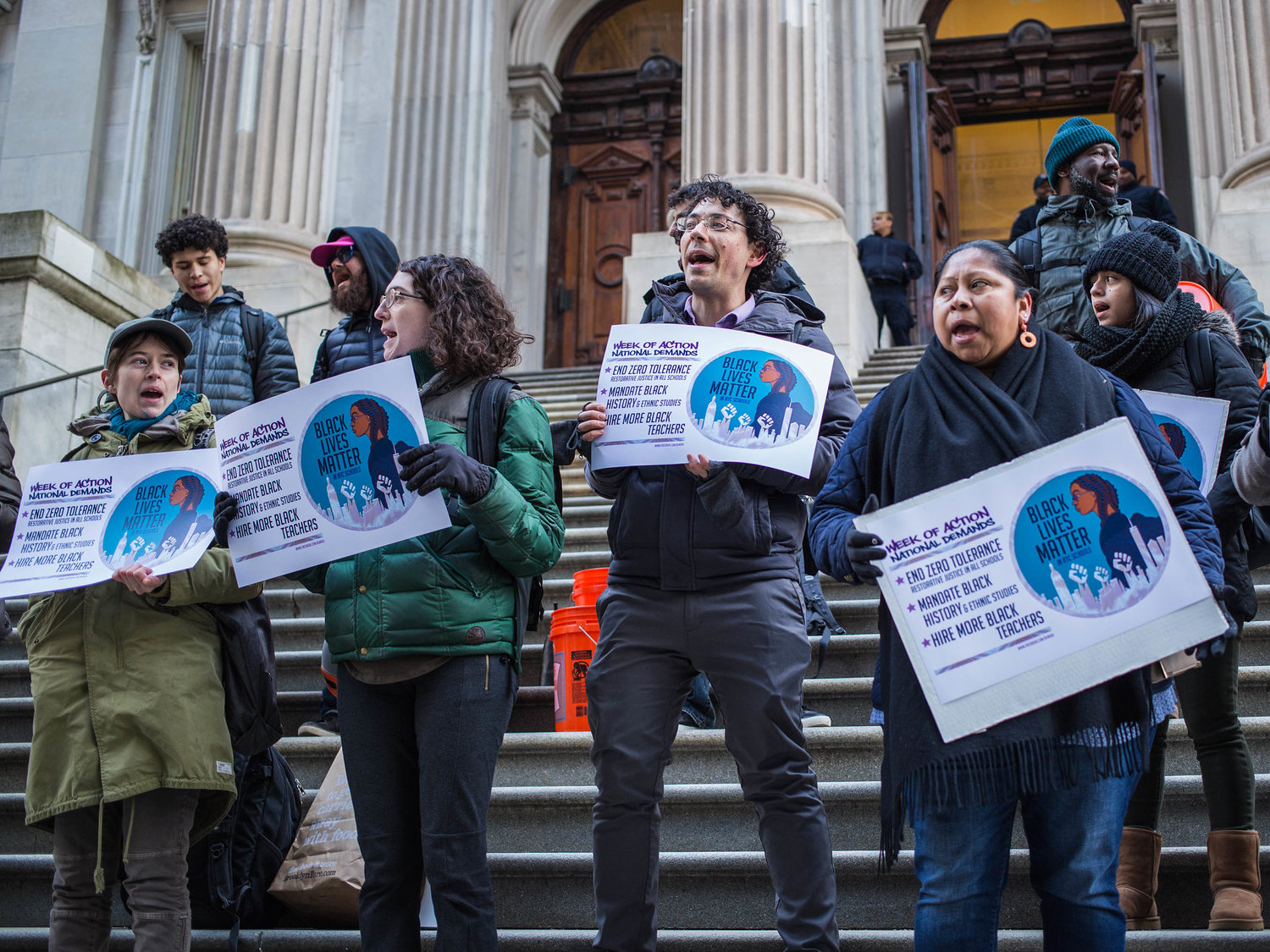 ERASING A BURDEN: About 2.3 million New Yorkers, most of them black and brown, have criminal records, which often is an obstacle to housing, education and employment opportunities. While misdemeanor and felony convictions do not outright disqualify teacher candidates in New York City, passage of the so-called “Clean Slate” legislation would make it easier for applicants, for instance, to secure a teaching license, and likely help bring more black educators to classrooms, as the activists pictured demanded during a 2018 rally in front of the city’s Department of Education.

Photo courtesy of Iryna Yafimchyk for Working Families
Posted Thursday, May 13, 2021 8:09 am
By RICHARD KHAVKINE

Melinda Agnew, a 45-year-old single mother of three, did the time. And she wants credit for it.

Convicted in 1999 on aggravated assault and weapons charges, the Syracuse resident was sentenced to three years of probation. But while she completed her obligations to the criminal-justice system, she said, she continues to carry the burden.

Ms. Agnew, who returned to school to get a bachelor’s degree and is now working on a master’s, secured employment in the public-education and public-health fields. Still, she said, her record has cost her jobs and promotions and prevented her from accessing several housing programs, making it that much more difficult to unburden herself from mistakes she atoned for years ago.

“Twenty-two years later, despite all that I have done to give back to my community, I’m still suffering from the consequences of my record,” she said. “All because of my two-decade-old conviction.”

Despite her accomplishments since, too many landlords and employers, she said, “do not look at me holistically. Instead they see my record.”

Ms. Agnew is among the 2.3 million New Yorkers with a criminal record, which they, along with advocates and now elected officials, say carries a stigma that affects a person’s ability to find work, secure housing, even get an education.

State legislation under consideration would go a long way to ensuring that people who have completed sentences arising out of convictions for a number of misdemeanors and felonies no longer carry those burdens. The “Clean Slate” legislation would automatically seal and expunge the vast majority of convictions.

Brooklyn State Sen. Zellnor Myrie, the bill’s chief sponsor, said the legislation would help former offenders remove what can amount to a lifelong and perpetual judgment for the poorest decision a person ever made.

The bill, he said during a Codes Committee hearing May 6, “not only stands for basic tenets of redemption and fairness and justice, but will also be a tool for public safety and economic prosperity.”

He said that studies have shown that recidivism drops drastically for people who have had their convictions sealed and expunged. Expungement provisions provide an incentive “to not commit an offense," Senator Myrie said.

Offenses that would not be expunged include those requiring a person to register as a sex offender, and those for which a person is sentenced to life behind bars. Besides waiting periods, the bill’s provisions require that those seeking expungement not have pending criminal charges in New York State, not be currently on probation or parole for the eligible conviction, and not be required to register as a sex offender.

The bill would make it unlawful to inquire about a person’s record except in certain cases, such as in connection with firearms licensing or employment as a police officer.

The legislation has support from labor, including the Mason Tenders in New York City and Retail, Wholesale and Department State Union Local 338 in Mineola. Nikki Kateman, the political and communications director for that local, said backing for the legislation was sensible given the unon's representation of legal-cannabis workers and its support of the recently enacted Marijuana Regulation and Taxation Act, "a very important component” of which is the sealing of some past marijuana-related convictions.

“The Clean Slate Act is a natural extension of that,” Ms. Kateman said. “The proposed legislation is common sense for people who are trying to find economic stability, particularly if they’ve already paid their debt to society.”

But several District Attorneys said that while legislators’ intent was commendable, the statute, as currently written, was overly broad.

Bronx DA Darcel Clark said that while too many people  experienced “collateral consequences” because of their criminal record, the proposed bill could compromise public safety. She suggested narrowing the scope of automatic expungements to include most misdemeanors and low-level nonviolent felonies, and allowing judges to consider whether and when violent felony convictions should be expunged and sealed.

“We believe in second chances,” she said during the Codes Committee hearing, but the law “should include a mechanism to examine whether the sealing or expungement of violent crime is appropriate.”

Proponents say the New York bill would reduce involvement with the legal system by giving people more avenues by which to pursue stable employment and housing.

Citing data from the Washington, D.C.-based Center For Economic and Policy Research, the bill’s backers say that depriving the formerly incarcerated of full access to the labor market results in the loss of tens of billions of dollars in lost gross domestic product each year. On a more micro-economic level, those with records lose about $500,000 in potential earnings across their lifetimes.

“In fact, expungement recipients appear to be lower risk than the general public,” that study concluded.

Although the study’s authors noted that only a small number of convictions are eligible for expungements, and that “only a small minority of this eligible population receives them,” the gains are nevertheless clear: “if anything, due to the benefits we find in terms of employment outcomes (and possible benefits in other areas), one should probably expect their recidivism rates to decline,” they wrote

The study estimated that just 6.5 percent of people who meet the legal requirements for expungement in Michigan obtain it. It blamed that low rate on “procedural hurdles and expenses involved, the lack of legal counsel, the dearth of public information, and the fact that most people with records have limited resources for overcoming these challenges.”

Given that Senator Myrie’s bill would ensure that expungement is automatic, no such hurdles would exist here, and proponents of the legislation cite that as a reason it could serve as a model for other states.