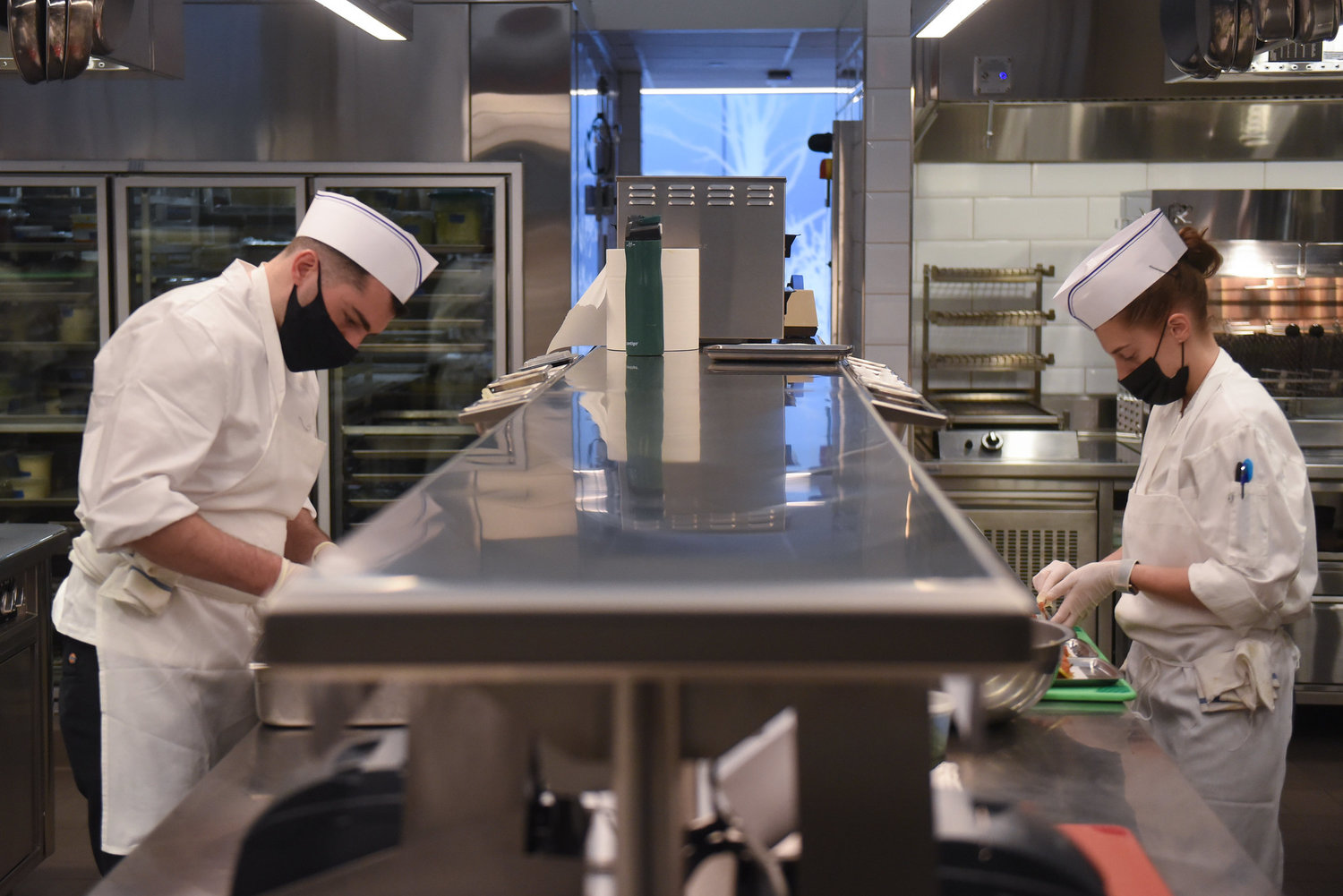 Workers at Le Pavillon at 1 Vanderbilt prepare a dish. The number of jobs in New York has yet to recover from the pandemic, with the restaurant industry particularly hard-hit. Advocates from One Fair Wage called for raises for food-service workers during a Nov. 22 state Assembly hearing.
Michael Appleton/Mayoral Photography Office
Posted Monday, November 28, 2022 5:11 pm
BY CRYSTAL LEWIS

“This isn’t a workforce shortage, it’s a wage shortage,” Inayat Sabhikhi, the national research and coalition manager at One Fair Wage, testified at a recent state Assembly hearing on New York’s worker shortages.

Sabhikhi was among the labor experts, worker advocates and government officials who discussed the importance of increased wages and improved working conditions across a wide range of industries as a way to attract and retain employees.

The state has 309,000 fewer jobs than it did before the start of the pandemic in February 2020, representing a 3.1 percent loss, according to data from the Center for New York City Affairs.

“No other large industrial state has a larger pandemic jobs deficit over the past 32 months than New York’s,” James Parrott, the center’s director of economic and fiscal policies, said during the Nov. 22 hearing held by the Assembly's Standing Committee on Labor.

In New York City, many of the jobs lost were due to shrinking population. The city’s population decreased by about 336,000 residents, according to an analysis by Cornell University of data from the Bureau of Labor Statistics. The percent of jobs lost upstate was 3.7 percent, greater than the city’s decline, Parrott stated.

A report recently released by the state comptroller’s office found that New York’s labor force declined 1 percent between 2011 and 2021, while nationally, the labor force grew by 5 percent. This data “shows troubling long-term trends [that] were exacerbated by the pandemic and may be impeding New York’s recovery,” Comptroller Thomas DiNapoli said in a statement. “Policymakers must give attention to policies that foster labor participation and encourage workforce development.”

Although much attention has been given to the great resignation — during which a wave of frustrated workers across the country quit their jobs as the pandemic roiled industries and the economy — Parrott noted that “the national narrative on whether or not there has been a great resignation on the part of workers over the past two years applies least of all to New York State.”

In fact, New York is the state with the lowest quit rate in the country, standing at 2.9 percent compared to the national average of 4.1 percent, according to the Center. Still, New York’s unemployment rate was 4.4 percent in October, higher than the U.S. average of 3.7 percent.

Parrott called for wage increases to attract and retain staff, especially in the childcare and home health-care sectors. Workers in both industries earn low wages: the average salary home health-care workers in the city is about $32,000, according to the Department of Labor. Parrott cited a recent BLS survey that found that 800,000 New Yorkers cited caring for a child or an elderly relative as the reason why they aren’t working.

“Raising wages for low-paid workers addresses labor shortages both directly and indirectly,” he said. “It will not only be effective for recruiting and retaining workers in these industries, it will also help to increase labor force participation rates for household members not now in the workforce due to caregiving responsibilities.”

One Fair Wage has been advocating for raises for restaurant workers, who earn subminimum wages. In New York City, Long Island and Westchester, food service workers have a $10 minimum wage, and must rely on tips to reach the $15 minimum wage. A study released earlier last April by the organization found that half of women working in the industry reported that they did not earn enough tips to meet the minimum wage.

Sabhikhi noted that the restaurant industry was particularly hard-hit by the pandemic, with about one in five workers in New York leaving their food-service jobs.

But it’s not just wages that have caused the exodus: poor working conditions, including harassment, have also played a role. The One Fair Wage study found that about half of women working in the restaurant industry reported experiencing increased harassment since the start of the pandemic.

Nurses also frequently face abuse and poor working conditions on the job, said Benny Mathew, the director-at-large of the New York State Nurses Association’s board. The state’s nursing shortages preceded the pandemic but have gotten worse since Covid, with some nurses exiting the industry completely while others left hospital jobs to earn more money as temporary agency nurses. While there are 355,000 nurses licensed to work in the state, nearly half — 170,000 — are not working, Mathew testified during the hearing.

“So we do have nurses but they are not willing to work in unhealthy, abusive working conditions,” said Mathew, who is also a registered nurse at Montefiore Medical Center. “The recommendation to fix the [nursing] shortage in New York is simple: increase the pay rate, implement new minimum staffing requirements and enforce existing staffing laws to improve working conditions and quality of patient care.”

In order to attract and retain workers across all industries, the state Attorney General’s office called for increased protections against workers being misclassified as independent contractors and stronger safeguards against wage theft. Karen Cacace, the labor chief in the AG’s office, noted that safety in the workplace also became a heightened concern because of Covid. The AG’s office proposed creating a state-level Occupational Safety and Health Administration to monitor safety in the workplace.