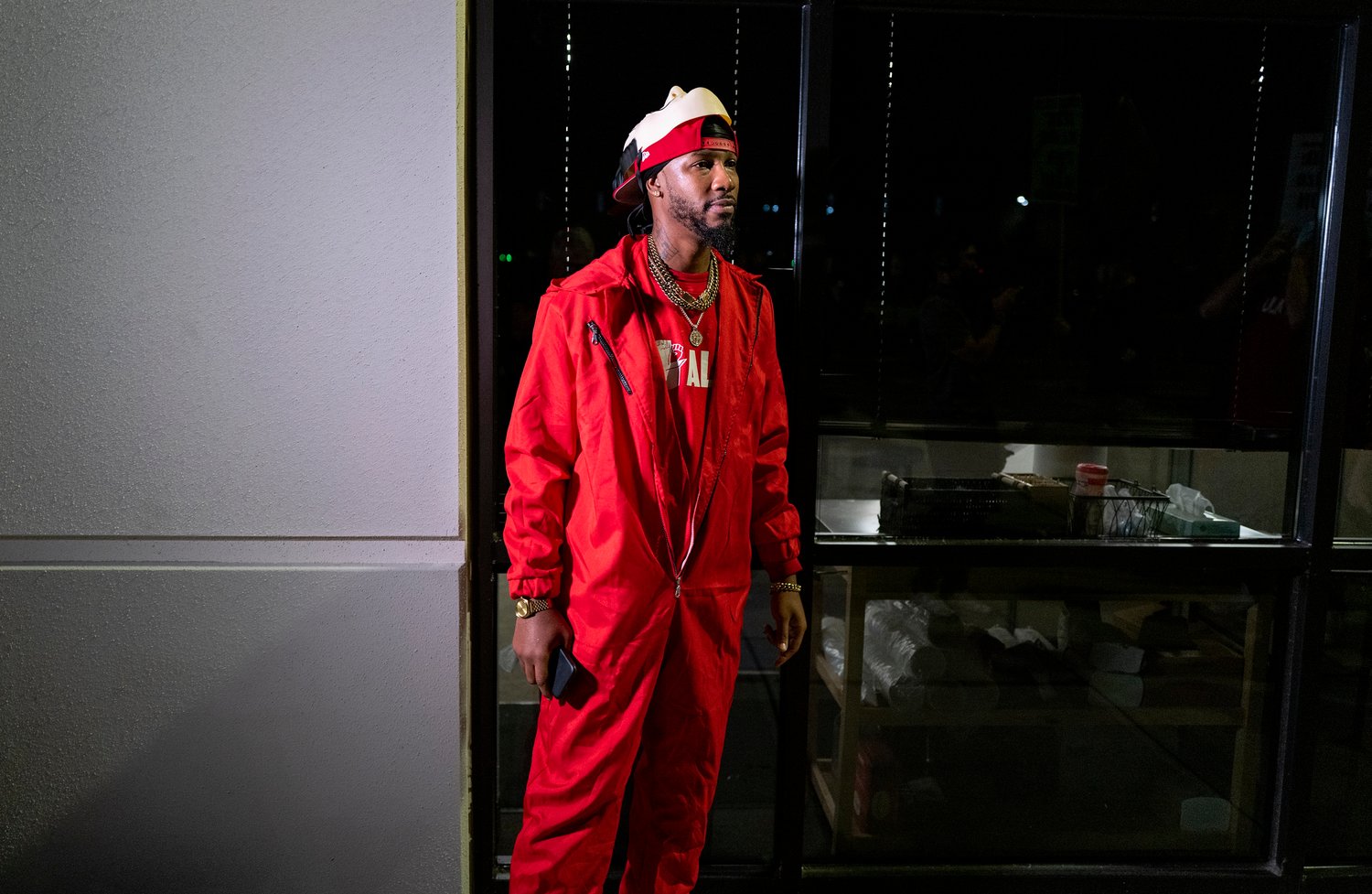 Chris Smalls, leader of the Amazon Labor Union that is seeking to represent workers at the package-delivery behemoth's JFK8 facility in Staten Island, said that for 10 months he'd been delivering food to workers there as part of the campaign without objections by management before the man who fired him two years earlier called police Feb. 23 to have him arrested for trespassing. Asked what he thought prompted that response, Mr. Smalls said, 'we've got an election and they're scared.'

Craig Ruttle/Associated Press Photo
Posted Monday, February 28, 2022 7:43 am
By RICHARD STEIER rsteier@thechiefleader.com
A day after the leader of the Amazon Labor Union was arrested Feb. 23 for charges including trespassing at Amazon's JFK8 facility in Staten Island, the group filed an unfair-labor-practice charge with the National Labor Relations Board claiming the company violated a December order not to inhibit workers' ability to engage with colleagues in non-work areas on their own time.
In the complaint, the independent union called for "an expedited investigation and...immediate relief in light of the upcoming election," referring to the representation vote due to be conducted March 25-30.
Amazon: targeted ex-worker
While two current employees at the facility, Brett Daniels and Jason Anthony, were arrested by cops from the 121st Precinct when they tried to come to the aid of Chris Smalls, the ALU leader, Amazon spokeswoman Kelly Nantel said it had summoned police because Mr. Smalls, who was fired two years ago, was trespassing.

The reason given for his dismissal was that he allegedly violated safety policies at the warehouse. Mr. Smalls has claimed that his complaints about management's failure to take protective steps against the coronavirus in the early days of the pandemic and a protest he subsequently organized at the facility were what led to his termination.
State Attorney General Letitia James in the wake of the firing brought a wrongful-termination suit on behalf of Mr. Smalls that is pending in Manhattan Supreme Court.
Mr. Smalls and Mr. Daniels were arrested last Nov. 15 at a tent outside the warehouse premises on a trespassing charge. The following month, as part of a settlement of charges the union had lodged against Amazon for allegedly interfering with its right to organize the workers, the package-delivery giant agreed not to bother activists as long as the lobbying took place in non-work areas and off the clock.
Ms. Nantel told reporters that "the settlement pertains to the rights of employees to solicit on the property, and we did nothing to stop employees from soliciting," having called police solely due to Mr. Smalls's presence.
Hadn't objected before
But Mr. Smalls said in a Feb. 28 phone interview that the food delivery he'd made to a break room at the facility five days earlier was part of a routine that dated back to an initial, unsuccessful organizing drive that began last spring.
"I delivered the catered food that the organizers bring into the break room," he said. "The Amazon Labor Union has been doing this for the past 10 months. We've been having luncheons multiple times a week. We feed the workers at the same time on those days. We were delivering the food when the same person who fired me two years ago came out and told me to leave and threatened to call the cops."
He was referring to Zachary Marc, the Assistant General Manager at the JFK8 facility.
Asked whether it was unusual for him to be personally bringing the lunch, which in this case was grilled chicken and pasta, Mr. Smalls replied, "I'm the only person that delivers the food, whether it's bringing the catered food or delivering the pizzas or the barbecue" from a grill outside the premises.
He said the reason Mr. Marc made an issue of his presence this time was "because we've got an election and they're scared."
Asked cops to wait
He continued, "When the cops arrived, they said we're asking on behalf of Amazon, can you leave? I told them we're waiting for one of the organizers to come out."
Dissatisfied with that response, officers moved in to escort Mr. Smalls from the building and "a couple of organizers came to my aid," referring to Mr. Daniels and Mr. Anthony. All three were arrested, but Mr. Smalls said that while the officers asked whether he was carrying any weapons and "searched me several times," they didn't take that precaution with either Mr. Daniels, who is white, and Mr. Anthony, who is Latino.
As the three men were taken from the building and placed in separate patrol cars (Mr. Smalls said there were five or six of them at the scene), a bystander's video that was posted on Vice showed workers asking officers why one organizer they knew as a co-worker had been taken into custody. A cop in mirrored sunglasses replied, "He was stopping us from arresting someone who was trespassing."
Mr. Smalls was charged with resisting arrest, obstruction of governmental administration and trespassing. At the 121st Precinct station house, all three men were fingerprinted and had mug shots taken before being released six hours later and told they had to report for a March 15 court hearing.
'Criminalized us'
"It felt like we were being criminalized," Mr. Smalls said. "This was unfortunate, traumatizing for my two colleagues."
He said he wasn't as unnerved by the process because "this wasn't my first rodeo." Asked if this was due to previous arrests for union work, he said no, explaining, "I'm just a black man in America."
The time in custody didn't discourage the three union officials from continuing their efforts to win the votes of workers at the Staten Island warehouse with hot meals. Mr. Smalls said, "We went right back to the same thing the same night."
He explained, "We've got to win an election. If they call the cops, they call the cops. We're gonna do what we gotta do."
He said the group planned a major rally at the facility March 20 at 3:30.

Burning up: UPS workers rally to get AC in trucks