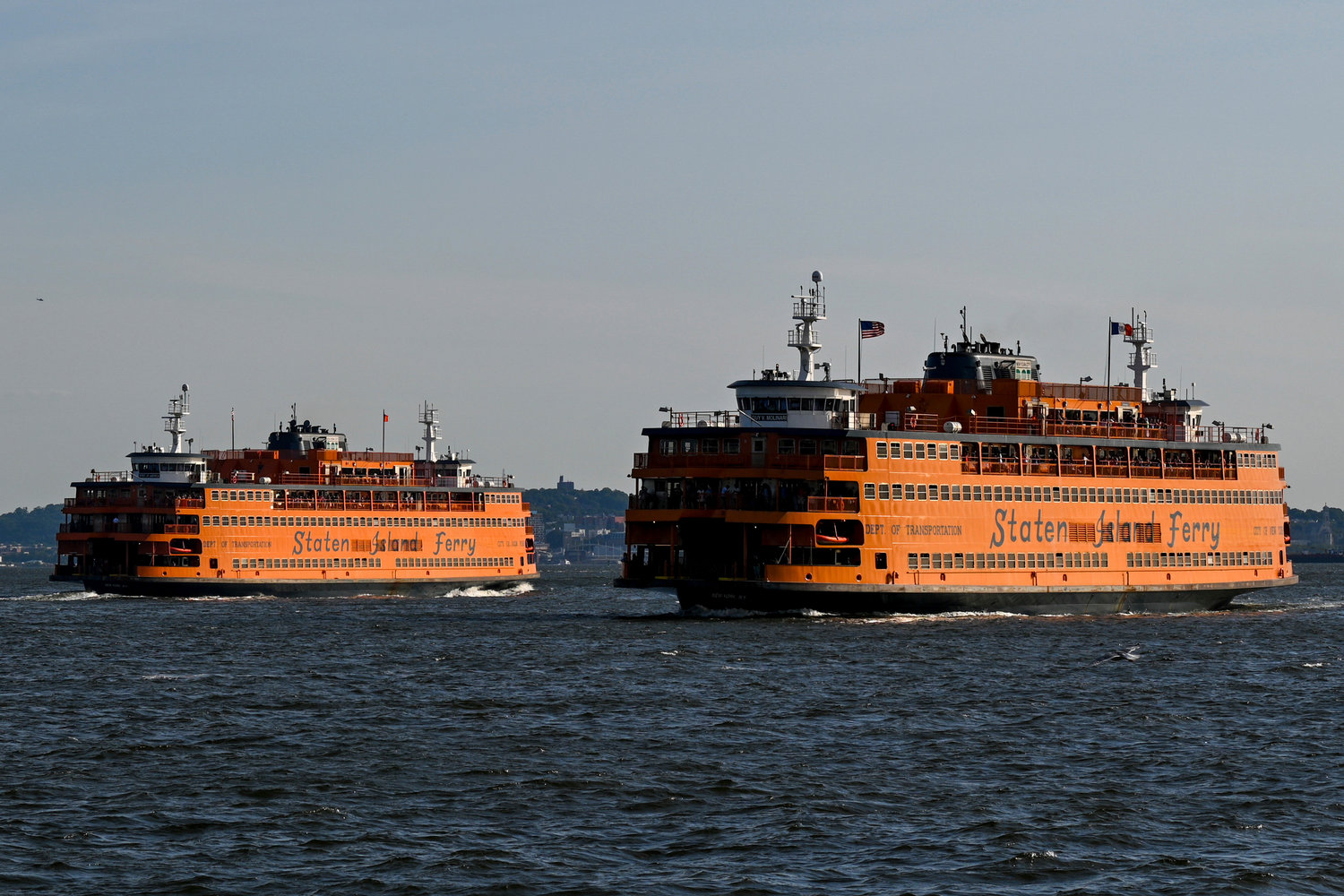 Staten Island Ferries sailed in New York Harbor in June. Ferry crews, many of them specially trained, have been without a contract for nearly 12 years. Several ferry crews failed to come to work two days earlier this week, stalling boats and thousands of commuters.
NDZ/STAR MAX/IPx
Posted Saturday, August 6, 2022 11:20 am
BY RICHARD KHAVKINE

A number of Staten Island Ferry captains and other mariners did not show up for work for at least two days last week, creating massive disruptions for 75,000 daily commuters and leading Mayor Eric Adams’ to suggest the crews were engaged in sickout over a protracted contract stalemate, an assertion their union adamantly denied.

And while he pushed back on the suggestion that the absences were a concerted effort to secure an agreement, the secretary-treasurer of the Marine Engineers' Beneficial Association, Roland "Rex" Rexha, did highlight the lack of a contract for the roughly 125 captains, co-captains, engineers and mates that run the ferries.

“The union has no knowledge of any deliberate disruptions of service nor would we endorse any action to slow down this essential service for our beloved Staten Islanders. The only thing ‘sick’ is OLR's refusal to offer a contract that reflects the highly-skilled and essential work of the ferry officers and mariners,” he said in a statement, referring to the city’s Office of Labor Relations.

The shortage “is completely due to severely overworked and understaffed crews," Rexha added.

The crews have been working under terms of an agreement that expired nearly 12 years ago, an unprecedented amount of time for any labor contract, but particularly for a municipal agreement.

The Office of Labor relations deferred comment to the mayor’s office. A spokesperson there said officials from MEBA and OLR have been meeting on a regular basis since March, and are prepared to keep working toward an agreement that conforms to salary patterns established with other municipal unions, and “are fair to workers and taxpayers.”

The union, though, is seeking more than the wage patterns offered by the city, and point to prevailing wages for other ferry crews, including captains. MEBA has been citing a study’s conclusion that the ferry crews should get salary bumps that would give them pay parity with their counterparts at the Washington State Ferry, the nation’s largest such system. That would mean pay bumps of 20 percent for most ferry workers and of 30 percent for captains.

"The union has and will make every attempt to work retroactively with what the city has offered but believes to maintain a safe and efficient ferry going forward they will have to address the disparity with the industry and the increased responsibilities added to our daily duties to operate the ferry safely,” he said in a statement Thursday, following another day of significant disruptions to ferry service.

Rexha noted that the crews, many of whom must secure Coast Guard licensing, are highly trained.

A spokesperson for the union, Carolyn Daly, said the city’s suggestion that it was offering pattern increases was insincere. For instance, she said, the city’s salary contract offer is essentially for a 32-hour week but that crews are typically working far more. “They’re asking them to do more within the pattern,” she said of the crews.

“The city created yesterday’s chaos because they were dishonest” in their bargaining, Daly said Friday, adding that OLR officials offered and then retracted an offer that could have been acceptable to the mariners. “Twelve years without a contract is disgraceful.”

Adams: ‘Something I inherited’

The Department of Transportation said nearly half of the day’s captains and a third of assistant captains, along with other ferry crew members began calling out sick Wednesday afternoon, and continuing overnight, stalling hundreds of commuters on either side of the bay.

Crew levels are mandated by Coast Guard regulations, and must be certified. Ferries cannot sail with passengers without a captain, assistant captain and a full complement of mates, oilers and engineers.

As a result of the absences, ferry service was significantly curtailed. On Wednesday, just one boat was making hourly runs from St. George Terminal in Staten Island and the Whitehall Terminal in Lower Manhattan, the Department of Transportation said. By Saturday, boats were sailing on the hour out of Staten Island’s St. George Terminal and on the half-hour out of Southern Manhattan’s Whitehall Terminal.

Typically, four ferries make the 5.2-mile trip every half hour during off-peak hours, and every 15-minutes during rush hours.

During the height of disruptions, the city supplemented SI Ferry service with boats from New York City Ferry, which is operated by the city’s Economic Development Corp. and Hornblower, a private company.

Daly said that the city had lost about 20 ferry crew members in the last two years, some to better paying ferry services. The worker shortage was particularly noteworthy since the fleet now has three “more complex” vessels, requiring more crew, sailing the route, Daly said.

“It’s painful for the members,” she said. “We’re worried about safety, passenger safety and crew safety.”

The City news site reported that the ferry workers’ contract was the only one of 152 municipal agreements, covering more than 300,000 municipal employees, that was not negotiated during the de Blasio administration.

Mr. Rexha said in December that he thought the MEBA contract saga was attributable to that administration’s indifference to the ferry service and the borough it serves. “I don't think they care about Staten Island,” he said then.

He added that he thought the then-incoming Adams administration would try to settle the matter. But asked about the disruption Thursday, Adams said he and his administration were caught off guard by the turmoil. “This is something I inherited. It was brought to my attention yesterday,” he said. Daly called that assertion feeble.