Fired just before Christmas, the workers pledge to ‘keep fighting’ 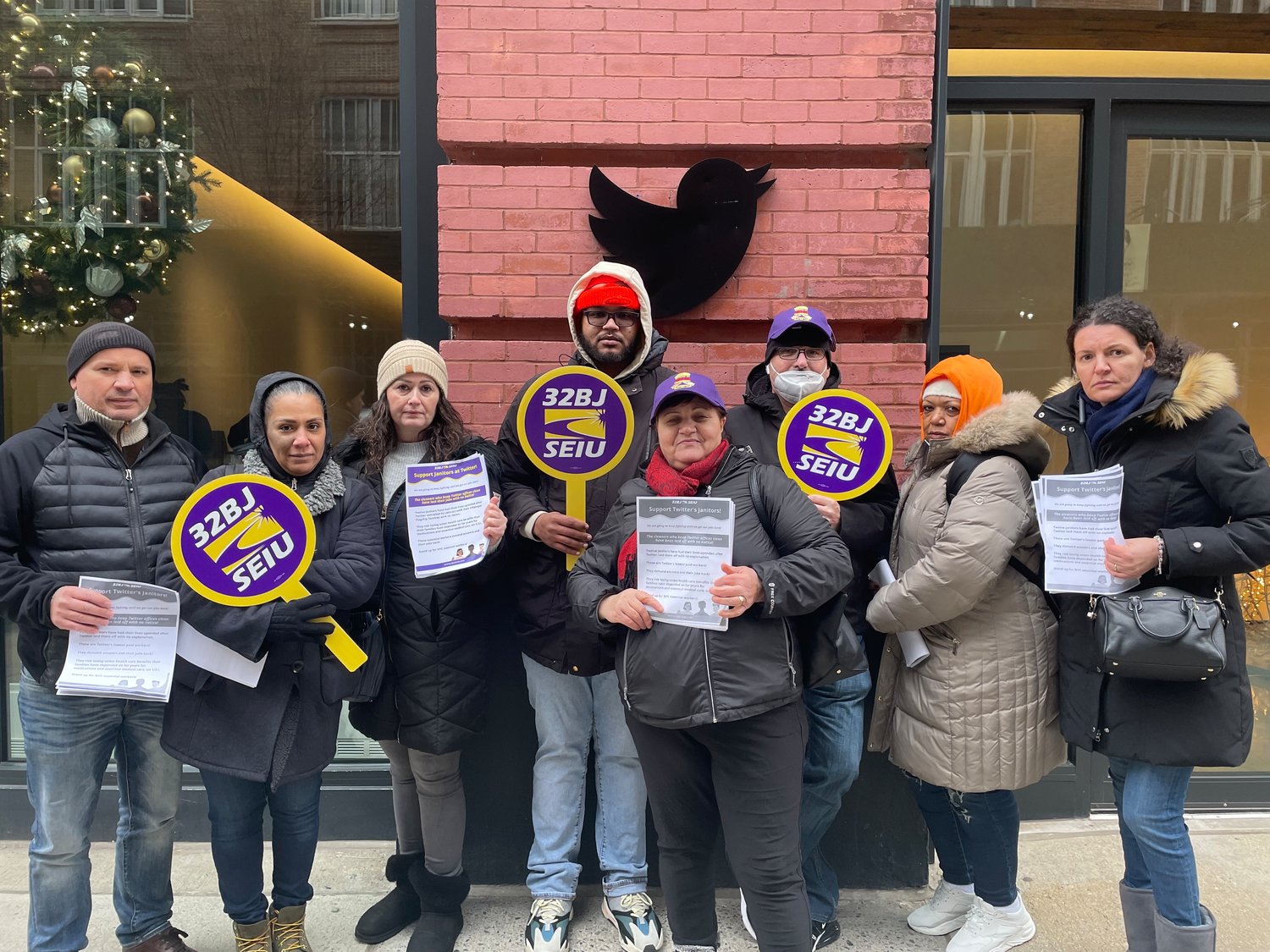 Union cleaners of Twitter’s offices in Chelsea protested outside of their former offices Jan. 10. The workers, including Lucy Calderon, were laid off in December. Twitter terminated the contract with Flagship Facility Services, which employed the cleaners, Dec. 19, leaving the 12 cleaners jobless and without the health care benefits that they had previously won with the help of their union 32BJ SEIU.
Courtesy Simon Davis-Cohen/32BJ SEIU
Posted Wednesday, January 18, 2023 9:14 am
BY DUNCAN FREEMAN

Lucy Calderon was preparing for her family’s Christmas celebration Dec. 19 when she got notice that, effective immediately, she would no longer be employed at her $31-an-hour union job cleaning Twitter’s headquarters in Chelsea.

She had clocked out from her shift just four hours before she received the notice that Twitter had ended its contract with Flagship Facility Services, the contractor that employed Calderon and her colleagues.

“It was very shocking … we had been working there for many years,” she said this week. The 12 cleaners went public about their firing on Jan. 10, and held a protest outside of Twitter’s West 17th Street offices that afternoon.

Calderon has worked at Twitter since 2017 and has been working as a cleaner since 1998. A single mother, she is the family’s sole breadwinner supporting herself and her daughter, both of whom have chronic asthma.

The cleaners have been unionized with 32 BJ SEIU for seven years and had won robust wages and health care benefits in previous contracts. Those benefits are now at risk. “I have to take medication every day for my health and I have to care for my daughter,” Calderon said. "It's really really bad, I'm still trying to figure out my next steps with my medication and paying my doctors.”

Twitter, bought in October by billionaire business magnate Elon Musk, alerted Flagship of the termination of their service in a short letter that said nothing about future cleaning plans and contained no information about replacing the workers. “We regret to inform you that Twitter has decided to terminate NYC Janitorial services,” the letter to Flagship says, “effective immediately December 19th, 2022.”

All of the cleaners at Twitter’s headquarters in San Francisco were terminated on Dec. 2 without  warning and the following week they too protested outside of the offices. Musk was at the time living at the offices and had demanded that many other employees do the same and work late into the night.

After the firings, San Francisco City Attorney David Chiu said he would investigate whether the layoffs were illegal, given a city law that mandates employees retain workers for at least 90 days when switching contractors. "Elon Musk has had a long history of flouting labor laws," Chiu told local media outlets.

A similar law exists in New York City though it is unclear if Twitter broke the law, and neither 32BJ nor the city have taken any legal action as of yet. It’s also unknown if Twitter has hired a new contractor to clean the Chelsea office.

Since he completed his takeover of the social media giant in October, Musk, one of the richest people in the world, has fired more than 50 percent of Twitter’s staff, most of whom held high-earning corporate and tech positions.

Neither Twitter nor Flagship Facility Services responded to requests for comment. Flagship employs workers in many different industries including culinary, janitorial and maintenance work.

“Twitter’s decision to cancel the cleaning contract for its NYC office has upended the lives of these dedicated cleaners, many of whom have worked at this location since Twitter moved in seven years ago. NYC’s essential cleaners have done too much for this city to be treated like this,” Denis Johnston, 32BJ SEIU’s executive vice president, said in a statement.

“They put their lives on the line to keep workers and the public safe throughout the pandemic and are essential to the city’s economic recovery in the aftermath of the pandemic,” Johnson said. “These union members and their families now face extreme hardship because of the loss of their good paying jobs with quality health insurance.”

Calderon said that prior to her termination, several Twitter employees approached her during a shift and told her how much they appreciate her work and how they hoped she could keep working there. Calderon and her colleagues aren't giving up on working in Twitter’s office though, “we’re going to keep fighting until we get our jobs back,” she said.

"We're here,” she said. “And we’re going to try to get our jobs and our health care back."